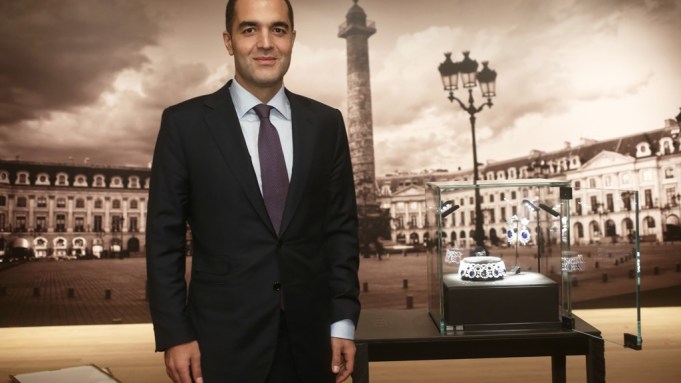 NEW YORK — Prepare to be dazzled.

Sotheby’s will host an exhibition titled “The Extraordinary Jewelry of Alexandre Reza” beginning Friday that will feature some of the world’s rarest gemstones.

The exhibit, which will be open to the public at Sotheby’s in Manhattan through Nov. 13, will provide a glimpse into one of the world’s largest private inventories of gemstones and fine jewelry. It will showcase 25 classic and contemporary vignettes including suites (necklaces, bracelets and coordinating earrings) consisting of 102 carats of untreated Colombian emeralds, and Ceylon sapphire and diamond earrings of over 148 carats created by the patriarch of Paris-based Alexandre Reza.

New pieces designed by Olivier Reza — son of now-retired Alexandre, who founded the famed maitre joaillier in the Fifties — include earrings rendered in old-mine Colombian emeralds set in baguette diamonds, as well as “Toi et Moi” rings of two flawless pear-shaped gems that are matched in size and shape to signify harmony, while the contrast in color denotes balance such as a Fancy Pink diamond juxtaposed with an emerald.

Olivier Reza took over the reins of the family business in 2008 with the idea of contemporizing the design philosophy for a new generation of global clients, including wealthy consumers from emerging countries such as China. In the consolidation, he closed several stores and focused the retail business at the flagship in the Place Vendôme in Paris, while redirecting his time and resources toward creating what he describes as “extraordinary jewelry.”

The partnership and exhibit with Sotheby’s has been four years in the making for which Reza designed the displays to “tell a story and put the jewels in motion in an aesthetic way that provides an emotion.

“It’s all about patience and passion, and you need an eye for this,” said Reza. “What I am trying to do here is not a commercial show with merchandise. I wanted to make sure this exhibition gives people an understanding of the breadth of the [artisanal] work that’s been done over the years. I also wanted every piece to have a visual story, more than a story of provenance. Every piece had to be extraordinary, and not redundant.”

According to Frank Everett, vice president and sales director of Sotheby’s, the exhibit’s jewels are valued at about $50 million. The craftsmanship of the Reza dynasty and quality gemstones reflect the tastes and trends of several decades, ranging from the conspicuous consumption of the Seventies and Eighties, to a lighter, more contemporary approach of the Nineties and early 2000.

“In the Seventies and Eighties, there was an appetite for very important parures. It was at time for vision and passion.…Later, such important parures were harder to make, and in the Nineties to present day, it’s very much about design but also about the stones. When you get a design right with beautiful stones, it’s better than owning a house,” explained Reza.

He added that the demand for colored stones such as flawless blue and orangy-pink diamonds returned in 2000 after a 20-year hiatus. “In the Eighties, the trade started altering and coloring stones, and consumers got spooked. But the technology got so good in detecting the alterations that by 2000 the appetite for colored stones returned,” Reza explained.

The exhibition will travel to Sotheby’s global offices in 2014, with planned locales including London; Doha, Qatar, and Beijing.