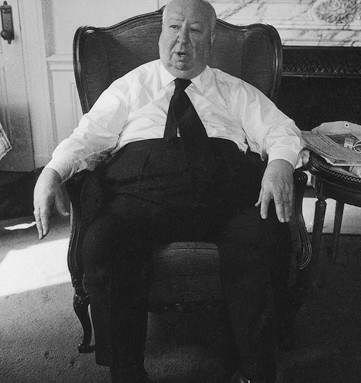 Though he is perhaps best remembered in silhouetted profile, Alfred Hitchcock revealed a number of different sides to WWD in a June 1972 interview and photo shoot, which took place in the filmmaker’s St. Regis Hotel suite. In town to promote his latest flick at the time, “Frenzy,” a hefty — practically egg-shaped — Hitchcock opined on a range of topics, from moviemaking and murderers to divorce and sex. Here, our favorite excerpts and outtakes.

On divorce: “Divorce is not easy in England, hence the need to murder. You really get some of the most bizarre cases. Arsenical poisoning is one of my favorites. It’s so clean, so sadistic and there are no traces. All the man has is a sick wife on his hands.”

On his process: “Yes, [I plan all my films] on paper, because I’m dealing with a rectangular white screen, not a camera. The camera lens is only a means to an end. A lot of people mistake beautiful landscapes or galloping horses for cinema. It’s not. It’s photography of the galloping horses or photography of the desert. You know, if you wait long enough for the end of the day, that hill on the edge of the desert is bound to cast a shadow across the sands. But then, God is the art director. You, as a cineaste, have done nothing.”

On improvisation: “[Improvising on set] would be like a musician writing a symphony with a full orchestra in front of him. I prefer to improvise in an office.”

On what makes the best killer: “The most important thing about a murderer is that he should be charming. He must be attractive or else he would never get any victims.”

On dominant women: “Look at the producer’s wife who has her husband cancel a television series because she doesn’t like it. She could appear to be a frail little blonde with no strength at all. But…she whines…she’s such a nag that he will do anything, buy anything, just to stop her. The little thing can probably tear the pants off him if she has a mind to. Maybe that’s me, too. Maybe my wife dominates me more than I think.”

On sex: “Sex is a guiding point in relationships only up to a certain point. As they get on, after five or six years, in most married couples ‘that old feeling’ begins to dissipate. Food oftentimes takes the place of sex in a relationship.”