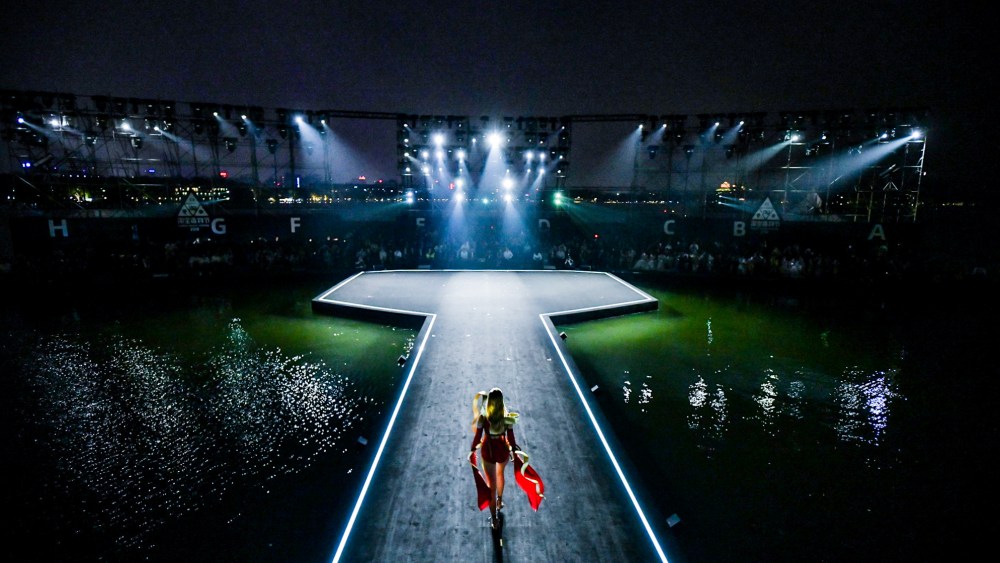 HANGZHOU —  More than four million people tuned into Alibaba’s fashion showcase on Thursday night held at the historic Broken Bridge across the West Lake. The live-streamed see-now-buy-now event on Taobao highlighted dozens of brands over an hour-and-a-half-long show — including Chalayan, Koche, Chen Peng, Particle Fever, Li-Ning, Kappa and Ban Xiaoxue — with many of the labels creating limited-edition products for the night.

It’s the second year Alibaba has added this fashion show component to coincide with its annual Taobao Maker Festival, which highlights the most creative storefronts on the company’s C2C marketplace in an off-line festival. This year’s theme was all things “Gen Z” and was staged over a floating runway.

Naomi Campbell was a special guest, walking down the runway and greeting Alibaba Group chief marketing officer Chris Tung for a few words at the start of the show, sharing it was her second time visiting Hangzhou. Earlier in the day, she had done a bit of taichi and met with the recently retired Alibaba co-founder Jack Ma.

Chalayan first displayed his fall 2019 collection plus two looks created for the show — two berry-colored ombré dresses that had helium balloons attached to the hems that floated behind the models as they walked.

Hussein Chalayan hinted that the event was a launching pad to do more in the country, saying, “The idea is, of course, to do some production here once we start selling a bit more…because we think our clothes look good on Chinese people. Even if you look at my drawings, people think I’m drawing more people from this region and my natural sensibility feels right [for the market].”

Streetwear and sportswear were a strong theme that ran throughout the night with showings from local ath-leisure label Particle Fever and the country’s leading sportswear maker Li-Ning to international revival brands like Kappa. The sector as a whole is booming with sports giants Nike and Adidas reporting stratospheric top-line growth in China.

“I helped her as a makeup artist years ago,” said Chen, explaining how the two initially met. Chen’s label is best known for outrageous down puffer jackets that have found their way onto music royalty like Lady Gaga, Beyoncé, Rihanna and Nicki Minaj. The designer also shared that the Broken Bridge show was a fateful event for him.

“Back in 2008 at that time, I liked a girl here and we were together,” Chen said. “She was also studying fashion design. We were walking along the Broken Bridge and said how amazing would it be to one day hold a fashion show here at such a pretty venue.”

“It’s pretty romantic,” Chen laughed as he recounted the story. “But at the end of the day, the one with me showing is my friend, Wan Bing.”

Many of the rising wave of China’s top designers — like Chen and Huang — are armed with degrees from schools in the U.K. and U.S., which would seem to indicate that the fashion ecosystem locally still has some way to go in terms of nurturing creativity, although is coming up quickly.

Chen chalked it up to the way foreign schools teach students how to think conceptually instead of only teaching them technical skills.

“Studying overseas is good if you want to start your own brand, but local fashion schools are better if you want to find a job at a commercial brand,” he said.