While working on the tome, the former Washington Post feature writer read up on the designer's FBI files. 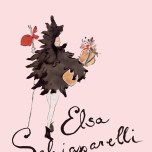 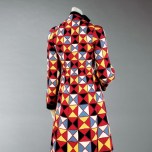 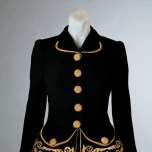 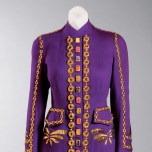 Meryle Secrest’s new book, “Elsa Schiaparelli: A Biography” (Alfred A. Knopf), has an unusual and striking dust jacket. It features a 1946 illustration by Marcel Vertes of a woman in a leafy-brown outfit, carrying a shocking-pink knotted kerchief on a stick and, under one arm, a large perfume bottle that is detailed with flowers, all on a pale-pink background. “We were looking for photographs of Elsa Schiaparelli, but we couldn’t find anything that was flattering to her,” Secrest says of choosing the image. “I had fallen in love with Marcel Vertes’ illustrations, which were kind of quirky, funny and a bit risqué, and they have a very deft touch. I found this ad for Schiaparelli’s perfume Shocking, and the perfume bottle was designed after Mae West’s torso. So, we were looking at it, [saying], ‘Here’s this girl in this funny costume. She’s got this lunch, and she’s got what looks like a dressmaker’s form under her arm. Why don’t we use that?’ ”

It’s not surprising that it was difficult to find an appealing photo of the designer — she was no beauty. As Secrest puts it, “There was a tremendous emphasis in her family on being beautiful, but her face was a little bit too long and her mouth was a little bit too wide.”

Schiaparelli began by designing trompe l’oeil sweaters in the mid-Twenties, and, by 1930, her firm was grossing millions of francs a year.

Secrest, a former Washington Post feature writer who has published 10 other biographies, had never written about fashion before, but she had written a book about Salvador Dalí, who was a major influence on Schiaparelli, as were the other surrealists. “Here I am, coming into a world that I don’t know a great deal about — but, wait a minute, she’s a surrealist who just happened to work in clothes,” she says. “When I got that into my head, everything fell into place.” The designer’s fantasy looks included a dress in organdy featuring Dalí’s design of a lobster, complete with parsley, which Wallis Simpson bought for her trousseau when, in 1937, she married the Duke of Windsor. There was an evening coat of blue silk jersey detailed at the back with a motif by Jean Cocteau with a trompe l’oeil urn, created by two facing profiles and filled with three-dimensional silk roses. Schiaparelli also created a hat shaped like a lamb chop and one that looked like a shoe, a handbag in the shape of a telephone and a jacket that resembled a chest of drawers.

While writing the designer’s biography, Secrest read her FBI files. It appears that Schiaparelli — who went back and forth between Paris and the U.S. after World War II broke out but remained in the U.S. from 1941 on — may have been a collaborator. She was under surveillance during her stay in New York. Her right-hand woman, Bettina Bergery, who handled everything from public relations to window dressing at her house, was married to a man, Gaston Bergery, who was the architect of the Vichy government in France. Meanwhile, her French lawyer, Armand Albert Gregoire, represented high Nazi officials in France, and she was friendly with Otto Abetz, the German ambassador to Vichy France during World War II.

There is no definitive proof that the designer was collaborating, but Secrest says, “Oh, yeah, I’m sure she did. How could she not? She had to have been collaborating because she couldn’t have gone in and out of France the way she did, swanning in and out.” As for Gaston Bergery, “I know he protected Elsa. Don’t you see — at the end, there was going to be a bill [the price for the freedom the Germans allowed her]. I’m sure she was a spy. I suspect that she probably did as little as she dared. When it became clear to her that she had to run, she came out at the last minute. I think that there would have been some terrible ramifications if she’d stayed.

“I’m convinced that she left just in time. The FBI followed her for the next two-and-a-half years. They were watching her, month by month. They knew she was up to something, but they couldn’t quite pin it on her. I do understand that she was just doing what she thought she had to do to keep the house requisitioned.”

Secrest continues, “It’s all a very long time ago. People made pretty much of a fuss about Chanel sleeping with the enemy, but she wasn’t alone. There’s a book, ‘Fashion Under the Occupation,’ which came out in 2002. It’s a very good book because it tells you not only who was collaborating, but what was happening to the clothes themselves and what happened afterwards. The big boys in fashion really got off with a slap on the wrist. The French government was bankrupt and needed money fast. Chanel and Schiaparelli were questioned, but they weren’t punished, whereas, if it were a shopgirl in Galeries Lafayette who was too friendly with the Germans, they would put her in jail.”

But, after all, the writer points out, politics and art are separate issues. “[Schiaparelli’s] work was absolutely immortal whether or not she did collaborate. According to Isaiah Berlin, the rough guide for collaboration was that, if you were a waiter, you served them [the Nazis], but you couldn’t really get cozy with them. That was his rule of thumb. There was no question in my mind that Elsa did. She was just darned lucky — she really was. That’s all I have to say.”