All Amped Up – Louis Vuitton, Lanvin

Paris was stretched to its limits for fall. Playing with proportions, designers volumized looks to perfection. 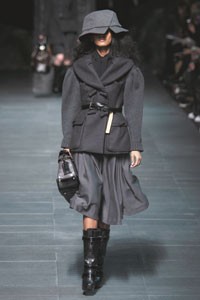 Paris was stretched to its limits for fall. Playing with proportions, designers volumized looks to perfection.

Louis Vuitton: The show’s golden invitation read “Louis Vuitton, Inventeur.” The same could be said of the man guarding that legacy, Marc Jacobs, who book-ended the fall season with his stellar show in New York and another in Paris for Louis Vuitton, where he showed an exhilarating, innovative collection full of fabulous clothes and bright ideas.

Like a pack of elegant Vuitton ladies gone wild, Jacobs’ models stormed the runway at a heart-pounding clip, wearing blown-up bucket hats, sweaters slung around their hips, all-terrain platform heels and looks featuring all manner of supreme exaggeration in between. Before the show, Jacobs described the look as “cartoon-y,” since it was inspired by Japanese manga and high-tech skiwear. He kept everything pumped up and amplified: chunky suits in tweed and latex, or cinched with sporty toggle ties; elongated waffle knits in umpteen-ply cashmere; even oversized sweatshirts in knitted mink. Jacobs armored a knit coat with beads, baubles and a bushy swath of fur. He paired a slouchy sweater with an iridescent quilted skirt and showed a drawstring peacoat with hot pink velvet raver’s pants. While many designers played with proportion this season, no one managed Jacobs’ bravado — or seemed to have so much fun. If a few of his overblown styles looked a tad heavy — well, maybe that’s the point.

Pushing his pop look to the extreme, “just feels very young,” Jacobs explained, though the collection’s irreverent chic is sure to seduce rebels of any age. Take house jewelry designer Camille Miceli, whom Jacobs cited as another inspiration, and who wears accessories she found at Tokyo’s Kiddieland with Azzedine Alaïa. Miceli, like Jacobs, knows how to diffuse the rigidity of luxury with a punkish gesture. And Jacobs’ range of power-pop bags, which bubbled over with imagination, made the point plain. Surefire hits, including metallic monogram bags and leopard-print bags, designed by the late Stephen Sprouse, will send legions tearing for the waiting list, while a multicolored monogram messenger bag done up in mink, and another boasting a pair of golden headphones as its handle, will go down in house history. Surveying the tantalizing array in the Vuitton studio, Jacobs envisaged at least one happy customer: “Jessica Simpson’s gonna wet her pants.”

Lanvin: Back in January, Alber Elbaz said that he’d given Lanvin’s shapely pre-fall silhouette “a little air.” By the time he showed his whimsical and wonderful fall collection on Sunday, that little puff had ballooned into a powerful, full-cut look that Elbaz took right to the brink. And it looked just right.

While he first showed similar volume at Lanvin seasons ago, he never did it with as much drama — or wit. Tuxedo jackets took on a womanly oomph with nipped waists and rounded, padded hips. Playing on the graphic look of his spring collection with a send-up of its sultry glamour, Elbaz worked a little trompe l’oeil magic, tacking satin hourglass panels onto black minishifts. Satin dresses veiled in feathery tulle took the look light, while tented coatdresses brought a classic Parisian chic to bear. As modern as it was, Elbaz’s latest collection felt in step with that of Balenciaga’s Nicolas Ghesquière, another designer rediscovering and reprising the couture techniques of a bygone era and making them his own.

Of course, in inflating things so, Elbaz took a big risk. But it worked. He never lost control, even when wrangling the most outrageous proportions. Elbaz seems to be taking Lanvin’s prettily undone look in a new direction. It’s as exciting to watch Lanvin’s proportions swell up as it is to see him stretch as a designer.