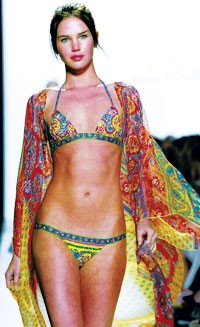 Oscar de la Renta: Just call him Oscar de la Fabulous. Because chez de la Renta, things could not have been more divine. The collection de la Renta showed on Monday morning was a treat right from the start, brimming with clothes to thrill retailers across the country and their customers across generations.

In recent seasons, de la Renta has gone quite seamlessly younger, banishing any vestige of madame malaise while staying true blue to his very dapper self — and, just as importantly, to those legions of loyal ladies. At the same time, he has managed to woo and win a younger set — and they’re getting younger all the time, as indicated by the front-row presence of Jessica Simpson, Ashley Olsen and Mandy Moore.

They settled in as the worldly designer took far-flung references and whipped them up into a stellar wardrobe all his own. Pit stop India: a bold ikat for a shot of tailored exotica. Sixties Saint Tropez: a girl, a bikini, a featherweight caftan. International bohemia: flower child crochets captured, controlled and worked like the chicest of chic tailoring. The high seas: natty nauticals. Rue Cambon: What’s a little pilfering between tango partners?

Throughout, de la Renta fed his penchant for embellishment, tempered for freshness in a world gone deco crazy. Thus, a pencil skirt in aqua silk bore a single, oversized embroidered paisley under a sunny yellow sweater, belted to chichi effect. And de la Renta knew when to ditch the frills completely, as he did with some spectacularly simple dresses.

Everyone knows Oscar loves to shine at night, and for spring, he dazzled. Ready for nouveau Nouvelle Society party poufs? Or a glorious boho diva moment in printed chiffon with jeweled waist? No doubt de la Renta’s women — and his girls — can’t wait. Which, of course, is what has kept de la Renta in the thick of the fashion fray all these years: He always gives the ladies what they want.

Diane von Furstenberg: Once again, Diane von Furstenberg’s collection captured the essence of her own lifestyle — that of an avid traveler and adventurer. For spring, she was right in sync with the current bohemian trend, but she did it without getting too trendy, showing plenty of playful dresses and gypsy skirts, one in linen with coin details, and others in bright-colored cotton voile — a favorite fabric this season. Of course, the breezy chiffon dresses in those snazzy prints were also here, and they’re sure to please the ardent DVF follower. But the handful of strong sportswear looks was the real story. While von Furstenberg has tried her hand at tailoring in past seasons, the results have never looked as polished as they did this time around, especially in the coin-embroidered jacket paired with little silk shorts. Her dresses may be the bread and butter of her line, but great separates like these show that there is certainly room to grow. And speaking of expanding into new areas, the designer’s collaboration with fine jeweler H. Stern was in evidence in the heart-shaped gold earrings and crystal or rose quartz rings.

Anna Sui: Yee-hah! For spring, Anna got her gun, metaphorically of course, as she took a trip out to the Old West — a place that’s gotten more than a few Seventh Avenue visitors of late. Along the way, she wove in threads of high-necked Victoriana, the Teddy Roosevelt military and Sacajawea chic. All of which gave a happy, girlish nod to Ralph Lauren, and occasionally, to the rhinestoned charm of the celebrated rodeo tailor Nudie.

Sui’s frontier lasses would easily be the cutest, chicest girls on the prairie. And, if they should happen to hitch up the wagon and come on into town, they’d give those big-city sophisticates a run for their money, too. Sui sent them out in a gushing stream of flirty, fun dresses layered over white petticoats; prim lace blouses; antiqued denim and twill hobble skirts; ruffled jackets, and a few looks of cowgirl-gone-squaw. Often, she decorated the pieces up with colorful strips of American Indian beading on necklines, cuffs and epaulettes. A tad costumey? Sometimes. But it was all in the cause of good fun, and broken down, these clothes are a cool girl’s delight.

Sui garlanded her spirited pioneers with Erickson Beamon’s takes on the regalia of yore: rawhide strands strung up with beads, feathers and embossed metal discs; wide, rugged belts; giant versions of Grandma’s cameo. And, for the rugged terrain of town or prairie, she worked up wonderful Frye-inspired boots designed with a softness that usually takes years to develop. And for those times when a girl wants to rope her man, she can slip into sexy slides, beaded to perfection.

Tuleh: Who am I? It’s a question all designers tackle at various points in their fashion journeys. It’s what keeps them current and at the same time keeps them from going off the deep end in search of a hipper self. Sometimes, however, such soul-searching can lead a guy astray. And astray is where Tuleh’s Bryan Bradley went for spring.

To hear him tell it, Bradley has been living something of a double life, proclaiming a runway message of high spirits, optimism and, hey, you look pretty — a message he now views as a dastardly misrepresentation of his true, multidimensional self. “I was feeling that, for Tuleh to have any resonance and meaning for me personally, it had to move closer to how I live my life,” he told WWD recently in an interview in which he admitted — gasp — to a serious dislike of flowers, as if all those posy-strewn frocks were little more than a feel-good fib.

Bradley is hardly the first designer to use his runway as a public shrink’s couch. He’s just one of the more surprising, since this season’s brooding rock ’n’ roll-cum-Gibson Girl melancholia seems to have taken hold so suddenly. (Ditto the Mother Inc. soundtrack that lampooned certain surgical inclinations of front-row ladies.) All those high-drama, big-collared jackets and floor-sweeping skirts felt more than a bit contrived, even dowdy at times. And as for a naughty word print — what nice girl wouldn’t blush? The designer continued the aggressive attitude in his leathers, which included a frogskin jacket and an interesting transparent python.

Of course, Bradley is hardly angst-ridden 24-7, so he also showed a fabric printed with editors’ thank-you letters saved over the years, and another with names honoring people who have been important to his company. Also important to his firm: strong outerwear. He sent out plenty, from a sporty hooded olive jacket to an iridescent turquoise coat that dazzled, literally. But then, many of the clothes were lovely, and will look more so when relieved of the studied styling. Despite himself, Bradley couldn’t help but include some pretty, sheer dresses worn over long cotton tanks; airy blouses and easy Ts, layered for comfort over skirts or longish shorts. And ultimately, while his mood of the moment did not result in his best collection, at least Bradley wants to move on, knowing that no designer can afford to get stuck in Sameville, no matter how pretty a place it is.