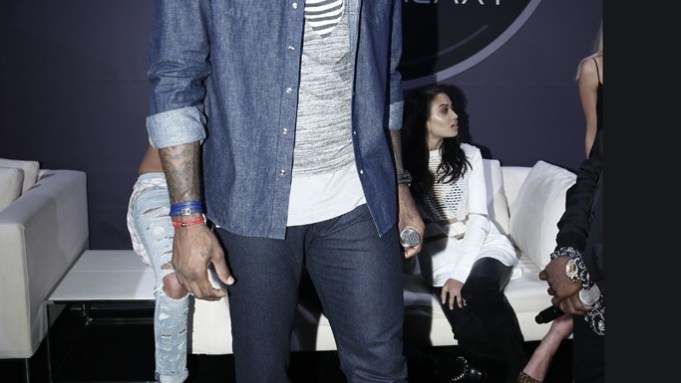 Like any other marquee runway show, all the real action happened backstage during Friday’s taping of the NBA’s first televised fashion show.

With headliners like LeBron James, Shaquille O’Neal, Charles Barkley, James Harden, Klay Thompson and Chandler Parsons teaming up for the “NBA All-Star All-Style” show, which airs tonight on TNT, they really couldn’t miss. Throw in the fast-talking, wisecracking comedian Kevin Hart; a bevy of IMG models like Chanel Iman, Erin Heatherton and Shanina Shaik; judges like designer John Elliott, and performers Flo Rida and Wale, and the runway debut was almost good to go. An hour after the 2 p.m. call time,  the only missing factor was the players, who apparently had redirected their driver to a take an unscheduled off-site pit stop.

Interestingly, the fan-friendly event’s three biggest draws — James and NBAers-turned-TNT-commentators O’Neal and Barkley — shut down all on-site interview requests. Sharply dressed in his size 58 business suit, O’Neal was all smiles greeting the audience but considerably less so off-camera. That was until his girlfriend Laticia Rolle arrived and he bent over to plant a kiss on her lips. He also perked up when Heatherton passed by, asking her, “How are you doing? How are your friends?”

Considerably more relaxed in a fedora, jeans and a button-down shirt, James, whose Springhill Production Co. produced the show, pretty much smiled and laughed his way throughout his backstage commentary. Aside from inking an unprecedented $42.1 million, two-year deal with the Cleveland Cavaliers last year, James has more endorsement deals than any other player. Guests at Friday’s taping need only look around backstage to be reminded of a few — namely, the show’s presenter Samsung Galaxy, as well as sponsors Ciroc and Kia Motors.

This being All-Star Weekend, the NBA is gunning to amp up its style quotient with an “America’s Next Top Model”-inspired runway show with seven players each modeling three looks. But for some, hitting a zig-zagged runway was more daunting than any NBA showdown.

Watching Parsons march onto the runway in a Ralph Lauren suit, Tom Ford shirt and tie and Gucci shoes, the Sacramento Kings’ DeMarcus Cousins said, “OK, Chandler is a professional. He’s like a fashion model.”

Sporting an ASOS turtleneck, G-Star cargo pants and Nordstrom boots, Cousins said style is essential for post-NBA pursuits. “I do think it’s important because basketball doesn’t last forever. If you want fashion and other opportunities, you have to have your own sense of style,” he said, before being ushered onto the runway.

Also looking noticeably uncomfortable were Thompson of the Golden State Warriors and Zach LaVine of the Minnesota Timberwolves, who fidgeted with the buttons on their slim-fitting suits and shifted around backstage nervously. As for why modeling in front of a few hundred fans in the rundown Hammerstein Ballroom is more nerve-racking than competing in front of his 19,000-plus home crowd at the Target Center, Thompson said, “We’ve been playing basketball since we were little so that comes naturally. But it’s not every day that you’re on the catwalk.

“It’s important to get out of your comfort zone,” he said, pressing his Alba three-piece suit with his palms. And if designers start sending him freebies, so be it. “Hopefully they will. I love free clothes. But I’m not running out to get the latest shoes,” said Thompson, glancing down at his Ferragamo slip-ons.

Later when James inquired about a post-runway on-air chat with LaVine, a 19-year-old rookie, a TNTer told him, “We’re not talking to Zach. He’s too young to be in the lounge.”

The lounge’s complimentary Ciroc vodka bar was the real deterrent, not its white leather couches or the Vine-backed 360-degree camera station. But that didn’t mean James and Hart couldn’t start the cocktail hour early.

Summoning a buddy to hold his drink before filming resumed, James said loudly, “I was going to set it down, but there are a few people around I just don’t know.”

He wasn’t kidding. A throng of production assistants, stylists, publicists, friends, wives, Turner executives, models (aka backdrop “talent”) and even a few children crowded backstage, clinging together like magnets whenever “groups, groups, groups” were needed. “Look like you belong here,” they were told.

Even Harden caught some heat from Hart for acting a little stiff. “Shut up man! Act like you know me man and that you like…” Hart said, holding up Harden’s NBA doll. “Why are you Mr. T? What grade of hair did they give you? Why are you Velcro on the tops and some itchy stuff on the bottom?” before punting the toy.

LaVine also appeared iced out of the backstage dressing room that Parsons, Chandler and others had piled into like a clown car. With 12 strangers killing time near two vats of untouched coffee and snacks that one described as “some cheese and cat food,” the Minnesota Timberwolves guard casually dropped trou, changing out of his three-piece Alba suit into a pair of jeans and an old-school pin-striped Minnesota Twins shirt. Looking considerably less wan than he was earlier waiting in the wings for his runway debut, LaVine said, “It was a lot of fun being in a different environment than a basketball court and showing a little personality with your clothes.”

Like a few of the players, Hart made an early exit. “I gotta go. I gotta do stuff,” he told Harden and James as the cameras rolled. “I’m famous.”

“Really?” James deadpanned. “Don’t act like that. For real.”

Jeff Teague also took a lashing from Hart even though he earned high marks for his classic suit and polka-dot tie from Barkley and other judges. “You did not look comfortable,” Hart told him. “You kept licking your lips, which is a sign of a lack of confidence.”

After Harden ditched tight white jeans and a sun-kissed yellow button-down for a baby blue cotton suit with jewel-encrusted and spiked Christian Louboutin high-tops, James asked, “What, did you jump in a phone booth?”

As a TNT producer tried to hustle him out of a last-minute bathroom break that was holding up the finale, Parsons, looping his belt and wrapping a red leather bracelet on his wrist, had the wherewithal to ask, “Where’s the necklace?”

But after nearly two hours of taping, that wasn’t the only thing unraveling, as a few NBAers bailed early, but still needed to be shown to the door. “Yo, where my coat at?” Harden asked his publicist. “What is my coat doing in the car?”

“Who is taking us to the car?” she declared to no one in particular.

Turner Sports’ Damaris Lewis was also stopped in her tracks. In search of a player, she accidentally looked into a dressing room, “Whoa. What’s happening? I don’t want to see naked men,” before taking one more fleeting look.