Since couture is often about fantasy, designers gave models a generous sprinkling of fairy dust this season. 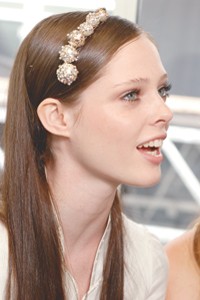 Since couture is often about fantasy, designers gave models a generous sprinkling of fairy dust this season. Faces and hair showed glints of glitter, rhinestones and sequins at shows such as Giorgio Armani Privé, Christian Dior, Christian Lacroix and Chanel.

At Armani Privé, makeup artist Peter Philips tipped eyelashes with a sparkling red. “Mr. Armani wanted something red on the eyes, since there was no red in the collection,” he explained. “I am not a fan of red lashes — they’re not flattering. So I ended up using red glitter.”

Over at Dior, makeup artist Pat McGrath bejeweled eyes — and some mouths — with sequins and glitter to go with a plethora of densely embroidered gowns. “We spoke with John [Galliano] and he said, ‘Why not play with embellishing the eye?'” she said. Meanwhile, rhinestones spangled the coifs at Lacroix, where each model wore a bobbed wig dotted with the faux gems.

So why was there so much shiny stuff?

“Maybe people think they need sparkle in their life,” mused Odile Gilbert, the hairstylist who created the dazzling look at Lacroix. For Chanel, she sprinkled false pearls and shiny baubles onto models’ hair.