Allie Teilz Gets Tailor Made

The DJ is launching a line of suits inspired by her music icons and priced for her young, broke friends. 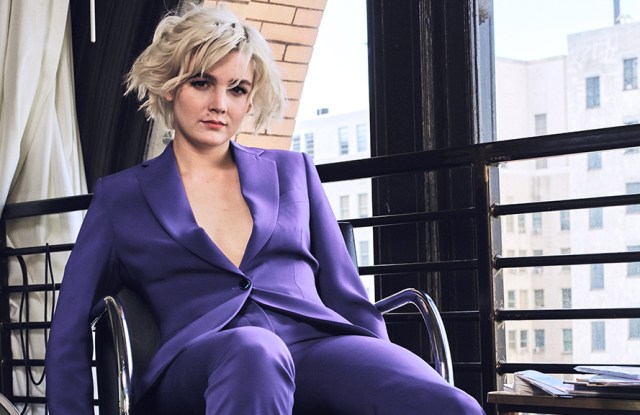 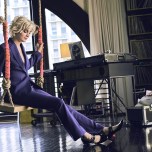 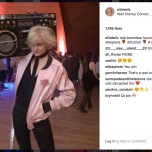 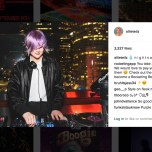 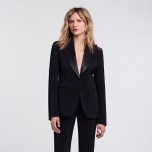 When Allie Teilz decided to design her own line of suits with rock ‘n’ roll swagger, she did not lack for famous references. David Bowie, Annie Hall, Jackie Kennedy, Bianca Jagger all roll off her tongue as major influences for her new collection, which launches Nov. 16 on Allieteilz.com. But in her opinion, no one made the suit more powerful than Grace Jones.

“That’s the first image of a woman in a suit that seared through my brain — the cover of ‘Nightclubbing,’” says Tielz of Jones’ unforgettable 1981 album cover by Jean-Paul Goude with her flat-top hair cut, unlit cigarette dangling from her lips and plunging black suit. “When she’s in Armani with big shoulder pads? It’s untouchable.”

Teilz’s ode to the look is the Grace Tux. Done in black viscose with satin lapels, it’s the line’s most expensive style at $600.

More than a muse, Jones “is my girl,” Teilz says. By “girl” she means client — Teilz’s primary job is DJing, and she’s worked for the singer in Jamaica and Los Angeles. Jones is but one of the impressive names the 22-year-old can casually drop in a conversation about how a teenager from Phoenix starts producing arena shows in Las Vegas on the weekends while in high school, eventually working with Questlove and Radiohead and, now, launching a fashion line inspired by her day job. Key to it is a passion for music, access to the World Wide Web and a very long leash from her parents.

When she was 13 Teilz started working as a janitor in a local record store in exchange for free music. “It was definitely under the counter, like here’s some records, clean our s–t,” she says.

Through the store, she met local promoters and started producing her own small shows, which led to introductions to bigger concert promoters, bigger venues and her own stints DJing at Glasslands and 285 Kent in Brooklyn.

Asked if she had a chaperone as a 16-year-old flying to New York to DJ warehouse parties on the weekends, Teilz says no. “I just told my parents, ‘I’m going to be doing this,’” she says. “My mom’s a librarian and has really conservative vibes. But I knew what I wanted to do and that I needed to escape Phoenix because they’re not very welcoming of people who are different.”

Now based in L.A., Teilz has worked with Frank Ocean and Lorde and toured with M83. She describes her musical style as a combination of funk, disco, hip-hop and soul, citing the blended sound that New York’s Paradise Garage was famous for as a big source of inspiration, even though the club closed years before she was born. “The Internet is amazing,” she says.

As for fashion, “I’ve been absorbing the style that exists at the intersection of music and fashion,” she says. To her point, she met Joaquin Phoenix at a show in L.A. and the two began dating in 2013. (They’re currently “good friends.” ) She accompanied him on the press tour for the film “Her” and pilfered from the rack of suits his stylist supplied. “There was one John Varvatos suit that was kind of smaller, and I tried it on and was just obsessed,” Teilz says.

She started designing her own suits, having dabbled in pattern-making — she’s self-taught with the help of the Internet. Making it a business came via chance encounter: When two people wearing custom red suits bump into each other on the street, as she and L.A.-based bespoke tailor Malcolm Alexander did last year, they have something to talk about. “We immediately vibed and had great chemistry,” Alexander says.

He and his business partner, Geoff Wahlman, are now advisers in Allie Teilz, consulting on design and helping her set up production in L.A. and Thailand.

The collection, launching exclusively through online, direct-to-consumer, is women’s, men’s and agender with 17 suit styles for women and 10 for men, each suit named after a muse. There’s the ivory satin Bianca, and the navy viscose with black satin shawl collar, Barry.

Teilz is firmly antiwool for ethical reasons and prefers viscose and poly because they can take a hit when traveling. “If you spill something it brushes right off,” she says.

Prices start at $250 for a full suit and go up to $600. Jackets and pants are also sold separately, and jacket linings are customizable in 12 color options with personalization and embroidery available as well.

“I saw this place in the market that didn’t exist for people like me and my friends to buy suits,” Teilz says. ‘It’s either really expensive, $6,000 a piece, which no one I know can really afford, or Topshop. I wanted to find something that was in between and accessible but still luxury.”