The company is angling to bolster sales in the U.S. among other countries.

By Rosemary Feitelberg on December 7, 2020

Through her company Alter Design, Pauline Ducruet is sharing a message of inclusivity and environmental responsibility.

Averse to predefined social stereotypes, Ducruet said she started her company because unisex and gender-fluid fashion were not thoroughly represented in the luxury sector. Fusing that with an eco-responsible approach was important to her. But sourcing nice sustainable fabrics and finding ways to lessen the environmental impact can be the most challenging aspect of business, she said. To that end, she has ruled out leather and denim, which require a great deal of water and chemicals for production, in favor of upcycled alternatives. Rather than manufacture seasonal collections, the company releases one annually.

After graduating from the New School’s Parsons School of Design in 2016, Ducruet had stints at Vogue Paris and Louis Vuitton. Last year she unveiled her Alter collection during Paris Fashion Week, and she plans to return there next June in some capacity. Introduced as nonbinary, Alter now is more all-encompassing in its marketing, reaching out to men, women, and those who are nongendered, nonbinary and gender-fluid.

As for people who question the need to identify individuals by specific terms, she said, “It’s important to have the right words to show your intentions. For that, it’s important to name things right.” 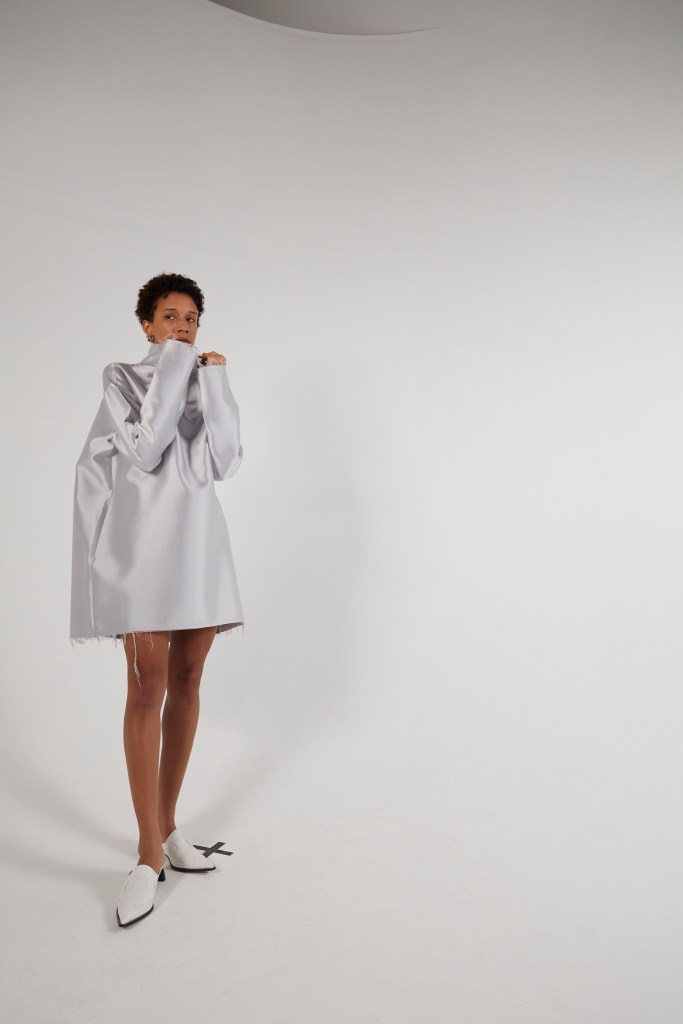 Alter recently overhauled its e-commerce site to give it more of an editorially polished edge. Intent on duplicating the success of pop-up stores in her home city of Monaco and in Le Marais in Paris, there are plans to open others in France, Italy and in the U.S. next year.

The brand’s ethos is “to embrace and inspire the freedom of self,” and is built on the tenets of inclusive, confluence, responsible and innovative. The one-size-fits-all approach is designed to encourage self-styling.

Alter’s Collection 21 is meant to relay Ducruet’s affinity for New York City, where she lived for several years and last visited in February.

The line also hints at her mother’s fashion sense — Eighties-inspired looks like exaggerated shoulders — and a free-flowing energy that stems from Ducruet’s childhood. Her view of Manhattan can be seen in the bold colors and architectural construction of some of the pieces in the new collection. “I’m a downtown girl, when I’m in New York. I used to live in SoHo, so that has my heart. I love to walk in New York, I love to take the subway — I like everything about it,” she said. “When I first moved to New York, when I was 20, I just fell in love with it. I was supposed to stay for only a couple of months, and I was there for five years.”

Lower Manhattan is worlds away from Monaco, where Ducruet is a member of the principality’s royal family. She is the granddaughter of Prince Rainier III and Princess Grace. Referring to the fashion sense of her mother, Princess Stephanie of Monaco’s House of Grimaldi, Ducruet said, “She has two sides: the public side where she dresses up for galas, and this more rock-‘n’-roll, kind of rebel style that I like. That has inspired me a lot and more than the beautiful style.”

The House of Grimaldi has a steep history in style including her late grandmother, whom film buffs know better as Oscar-winning actress Grace Kelly. Ducruet’s aunt, Princess Caroline, is a favorite among European designers and was especially close to the late Karl Lagerfeld, who once had a home in Monaco. “I grew up with these fabulous stylish women around me. Obviously, they have a place in my inspiration as well,” Ducruet said.

While some well-known personalities who have forged into fashion prefer to be anonymous, Ducruet is identified as the founder on the site. “Obviously, I have this opportunity to be viewed by more people than if I was doing this anonymously. It’s a chance that I’m taking because I have a message to convey. I think that’s important,” she said.

Asked if that can be challenging since people may make assumptions about her, Ducruet said, “I think people are making their own opinions about Alter. That is what matters to me. If they think they know me, good for them.”

Imperturbable as she is, the worldwide media continues to chronicle all things Grimaldi, including her younger sister’s recent tattoo. As a teenager growing up in the public eye ”was something that obviously not everybody knows [about]. It’s complicated for people to have an opinion about whatever you do. Now that I’ve grown up, I know where I stand. I know my values. I know who I am — so [they can] write whatever they want,” Ducruet said with a laugh and a shrug.

She continued, “As long as I know who I am, and the people that I love and those around me know my values, that’s what is most important.”

That self-assuredness extends to her take on fashion. Dressing for yourself is paramount instead of pretending to be someone else through your clothing. Alter’s designs are meant to accentuate the wearer’s personality, she said. Generally speaking, that is not done enough and “through fashion, you can express yourself,” the designer said.

Partial to a free and eclectic style, one day the designer might wear jeans and a T-shirt, and the next she could be decked out in a crazily colorful coat and accessories. “A really big fan” of Raf Simons, she hopes to one day meet him.

Alter’s online offerings include a yellow draped and belted tunic retailing for $790, a cropped satin shirt at $425, a long trenchcoat at $2,610 and a long leather jacket at $3,340. 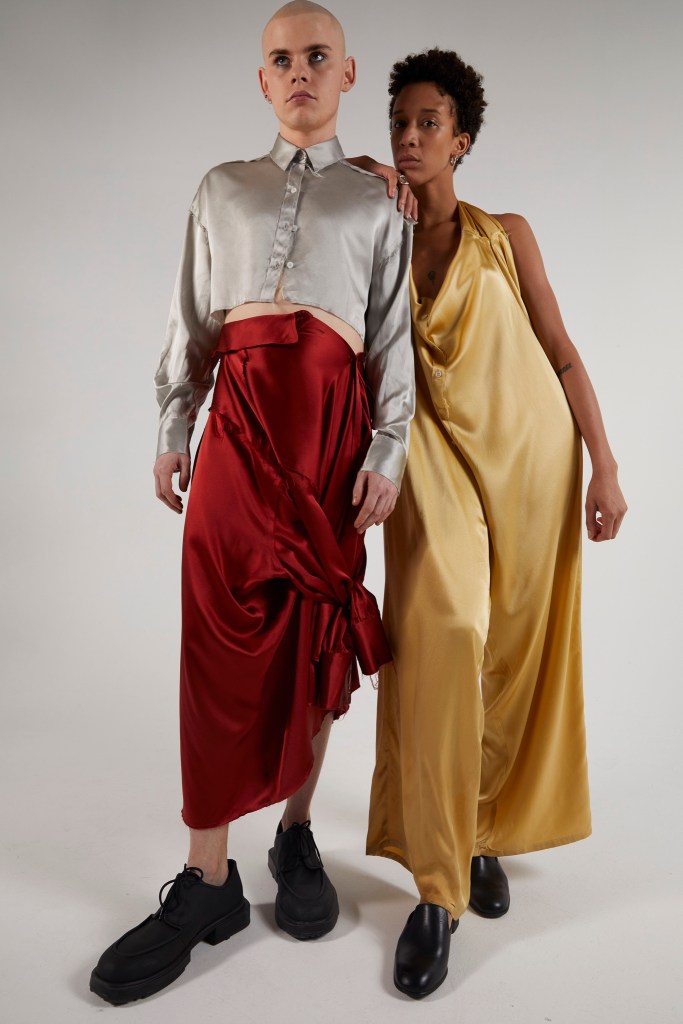 The gender fluid collection is also eco-responsible, according to the company’s founder.  Courtesy of Alter Design

Her conceptualization of a collection usually starts with a place or architecture. Always carrying a little notebook to jot down ideas is another resource that is put to good use, once she sits down for hours on end “to draw everything, and come back to it weeks later,” she said. During the more restrictive months of the coronavirus crisis, many ideas, textures and colors like forest green have stemmed from the outdoors, “since we seem to be inside a lot,” Ducruet explained.

Post-pandemic Ducruet expects to travel between Paris, Monaco and New York. “That’s really my balance. When I have enough of the craziness of New York, I go back to Paris, and then I go back to Monaco to my family,” she said.

In a couple of weeks, Alter will be sold via Maison de Mode, the sustainable-minded platform cofounded by Amanda Hearst. The site’s practice of preorders to avoid any wasteful mass production appealed to Ducruet. Amping up sales Stateside is more of a priority, due largely to U.S.-based consumers’ interest and attachment to eco-responsibility and gender fluidity.

While many in the U.S. and other parts of the world have been transfixed by season four of Netflix’s “The Crown,” that cultural phenomenon hasn’t really generated more interest in the Grimaldis, Ducreut said. In Portugal for a little bit of an escape from France’s confinement, the Alter founder will return to Monaco to spend Christmas with her family.

Off-hours, Ducruet, a former elite competitive diver, likes to travel, hang out with friends and enjoy some time with her family. “Some simple stuff and everyday stuff, just like normal life. I love the simple moments when you have a nice dinner with friends and family. It’s really rare to have those moments so I cherish them a lot,” she said.