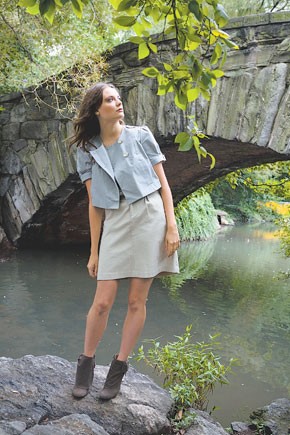 The designer, known for his signature best-selling pants, has created a contemporary sportswear line exclusively for Nordstrom. The collection, called Alvin, will launch in the spring in select Nordstrom doors. After the introduction, the line will open to other high-end specialty and better department stores. Valley will show the Alvin line next week at the Fashion Coterie in New York.

“The idea was to come up with something younger, casual and fresh,” Valley said. “This is a true contemporary line, priced about 30 percent lower than my designer line, Asis. With that said, it is still very much a designer line, with great quality and attention to detail in each and every piece.”

Valley said while he knew he wanted to design a lower-priced line, he didn’t want to go as mass as some designers have with their Target or H&M collaborations.

“I really wanted to stay in this higher-end world, where I see so much action and growth potential,” he said.

The result is a collection of separates and relaxed dresses that includes cropped jackets, soft cotton dresses, printed silk tops, shorts and cropped pants. Colors for spring range from emerald green and bright blue to soft pink, yellow and crisp white. The Alvin collection wholesales from $58 for a pair of shorts up to $183 for jackets.

“This collection is not at all serious, it is more for the weekend,” Valley explained. “These are not office clothes, they are for hanging out with friends, shopping, vacation. I picture this girl as being very chill and relaxed, but also feminine and sexy.”

Ana Swab, vice president of contemporary women’s apparel at Nordstrom, said Valley approached her with the idea for a new contemporary line.

“Alvin is very talented, and we have done great business with his line in the past,” she said. “So when he came to us with this new idea, we listened.”

Swab said Valley launched at Nordstrom in 2002, and the stores continuously sold out of his pants. She said she still does well with Valley’s higher-end collection, but was happy to hear his idea for the Savvy department, where the contemporary collections sit.

This story first appeared in the September 13, 2007 issue of WWD. Subscribe Today.

“The Alvin line is a bit more fun and not as serious as collection,” she said. “I liked the idea of a line of related separates for our Savvy department. I think it will do very well for us.”

“As for a store, I was always looking for the perfect location, the perfect opportunity,” he said. “But the Alvin brand will be treated as an entirely separate business, so this might be the right line for a store.”

Valley said he will continue to approach his lines separately, always concentrating on a different woman.