Despite the religious implications in the brand's name, there is no irreverent message in Amen, the Italian collection that has caught the eye of retailers from Linda Dresner to Maxfield. 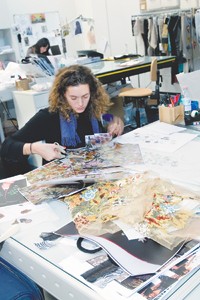 MILAN — Despite the religious implications in the brand’s name, there is no irreverent message in Amen, the Italian collection that has caught the eye of retailers from Linda Dresner to Maxfield.

“I simply imagined a woman rifling through her wardrobe, wondering what to wear on a special occasion and then finally picking one outfit with an exclamation — ‘Amen, so be it, I found it, this is the perfect dress I had in mind,'” explained Jacopo Tonelli, who introduced the line in 2003 as part of Jato.

Tonelli founded Jato — the acronym of his first name and surname — in Bologna in 1991. Jato works with a roster of fashion houses, from Gucci, Valentino, Blumarine and Etro to Balenciaga and Lanvin, providing delicate embroideries. The company has set up a branch in India, where it has taught the traditional Italian techniques of embroidery to craftsmen there.

“The style was terrible, but the manual skills were amazing,” said Tonelli about the human resources in India.

Tonelli and his mother, Giorgia Rapezzi, were pioneers, venturing to India in 1984 with a previous family-owned firm. “It was tough at the beginning. There were no phones, no faxes, we were really isolated,” recalled Tonelli.

Using Jato’s expertise, Amen’s fluid tunics, HotPants and feminine dresses are covered in embroideries, which enrich the feather-light materials, mainly silk or cotton. Amen’s embroideries come from India, while the clothes are assembled in Italy by Italian manufacturer Olmar and Mirta.

Tonelli compared Amen, which is designed by a team, to a jewel, “a luxurious decor for the body that lasts for more than one season,” not for daily use, but to be worn “on important occasions.” Tonelli said shapes and materials are “essential and clean,” offset by the embroideries, which are “luxurious and sophisticated but never Baroque.”

The line is available at around 70 points of sale worldwide, retailing at between 1,000 euros, or $1,320 at current exchange, and 1,500 euros, or $1,981. The color palette ranges from basic black, brown, camel, bronze, gray and dark blue to emerald green and vivid red, playing with tone-on-tone hues or shiny/opaque effects.

Tonelli said caftans are the brand’s bestsellers together with embroidered tank tops and sequined silk dresses. “We keep a low profile, relying on word-of-mouth buzz. We don’t want to be a spot brand,” he said.

Jato today counts 1,100 employees and has an archive of about 6,000 designer and antique pieces, from Poiret designs to 19th-century Egyptian wedding dresses.

Despite Jato’s expertise, Tonelli was reluctant to try his hand at a company-owned brand. “We were too focused on our clients and on protecting their labels,” said Tonelli.

Olmar and Mirta owner and friend Giambattista Tirelli, whose company produces the Rick Owens brand, eventually convinced Tonelli to introduce his own label.

And that hasn’t been the only link between the two companies: In a joint venture, Olmar and Mirta and Jato helped Riccardo Tisci introduce his first namesake collection in 2004, which caught the attention of LVMH Moët Hennessy Louis Vuitton and helped Tisci become creative director of Givenchy.