Contemporary clothing label American Chi is introducing the next evolution in back-pocket styling. 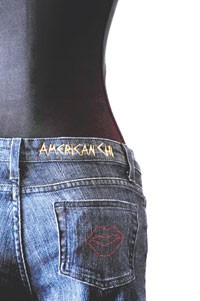 Contemporary clothing label American Chi is introducing the next evolution in back-pocket styling.

While other brands spent the last several years embroidering and studding their back pockets with diamonds and Swarovski crystals, American Chi has used technology to create pocket designs that light up and even move.

Dalia MacPhee, designer and one of the line’s owners, said the Canadian company has been able to animate back pocket designs by weaving light-emitting diodes — or LEDs — into the fabric.

“One minute the jeans are normal, the next minute you see pink lips appear, blow a kiss at you and then disappear back into the pocket,” MacPhee said.

Other designs include a skull and crossbones with teeth that chatter, a wagging finger and a happy face that winks. Select Macy’s stores ordered the line for fall, selecting designs that played to the tastes of different target audiences. For example, the back pocket for Macy’s stores in Texas has a horse that rears, and a portion of the proceeds are donated to a horse rescue organization.

MacPhee said it took several years to develop a viable system that was in keeping with the line’s premium focus. The first challenge was to weave the LEDs into the fabric while keeping it smooth. A battery had to be developed that was powerful enough to supply energy for the light to run for six days, be recharged and fit into the front coin pocket. A wire connecting the battery in the front to the lights on the back pocket also had to be woven into the garment in such a way that it wouldn’t be noticed.

“It’s replacing crystal and embroidery,” MacPhee said. “The beauty with this is you have a choice. You can press a button and turn it on or turn it off.”

Once turned on, the image usually appears for several seconds before kicking into an animated mode for several more seconds and then fading away. The whole process repeats continuously and attracts a lot of attention at bars, MacPhee said.

The line uses a mix of Italian and Japanese denim and is manufactured in the U.S. Retail prices range from $169 to $230 and the company expects to expand to between 800 and 1,000 doors this season.