Festivities at the start of this season's New York Fashion Week made it seem like a holiday.

By Lisa Lockwood and Taylor Harris on November 11, 2013
View Slideshow 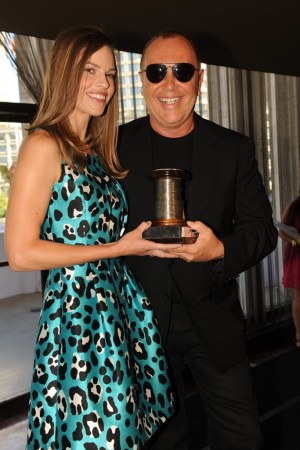 Not too many people involved in the frenzy of New York Fashion Week would consider it a holiday, but festivities at the start of the season made it seem like one. A little.

“Elie Tahari Day” was proclaimed on Sept. 4 by Mayor Michael R. Bloomberg to honor the designer’s 40th anniversary in business, and the fete was complete with a marching band (courtesy of Fort Hamilton High School) playing in Tahari’s Fifth Avenue windows, as top brass from Saks Fifth Avenue, Bergdorf Goodman, Bloomingdale’s and Neiman Marcus toasted him inside.

“I don’t know of any other city in the world where this could have happened. The City of New York gave me everything—I came to New York and lived in a shelter for runaway boys,” said Tahari, who arrived penniless and built a $500 million company. On this occasion, he donated $35,000 to Save the Garment Center—proceeds from a dress he produced and sold in his boutiques that was a winning design on Project Runway All Stars, when he was a judge.

The same day, The Museum at FIT’s annual Couture Council luncheon honored Michael Kors with its Artistry of Fashion award. “We were just in the middle of fittings, and I literally looked at my team and I’m like, ‘Pretend that the clock just stopped and we’ll be right back,’” Kors said as scores of glamorous guests including Monica Rich Kosann, Josie Natori, Martha Stewart, Linda Fargo and Iman filed into the David H. Koch Theater at Lincoln Center.

“Sashimi during show week is definitely a fashion friend,” Kors continued, ticking off his make-it-through must-haves. “And I’m totally addicted to iced tea. I suck it down all day. Thank God for Splenda. Also, I need trashy television at night. I’ll turn on, like, The Nanny. I want to laugh and take my brain out of fashion…Fran Drescher, she does the trick.”