American Eagle Outfitters is building its subbrand aerie, and will rely partly on nontraditional media to help do it. 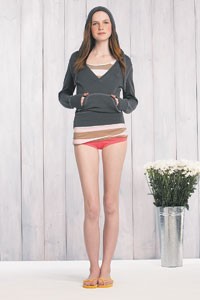 American Eagle Outfitters is building its subbrand aerie, and will rely partly on nontraditional media to help do it.

The company said Thursday that it will step up expansion by opening at least 15 freestanding aerie stores this year, and plans to generate excitement with inventive marketing at events such as the Sundance Film Festival.

“We’re accelerating the expansion of the brand through our stand-alone locations,” said Kathy Savitt, chief marketing officer for American Eagle.

Aerie, launched in September, is a collection of intimates and dormwear for 15- to 25-year-old girls. The collection is offered in all American Eagle stores, including 18 side-by-side stores and on ae.com. The company also tested three aerie stand-alone locations.

“We are thrilled by the strong customer reaction to aerie,” said Susan McGalla, president and chief merchandising officer. “We see opportunities to build the brand further by expanding and evolving the collection, including complementary businesses such as accessories and personal care.”

American Eagle believes aerie’s success is due partly to its ability to forge deep connections with its customers. The company has tried to find marketing vehicles that can be more meaningful than 30-second TV commercials or print ads sandwiched between hundreds of pages of advertising and editorial content. However, Savitt pointed out that AE hasn’t turned its back on traditional forms of advertising.

Next week, the company will head to Park City, Utah, for the Sundance festival, where it will host the aerie spa at the Village at the Lift.

“Sundance is an exciting, young, creative event that has become more than just an independent film festival, but a place for writers, filmmakers and content producers to go and discuss new media,” Savitt said. “Movies and content are very important to AE customers and Sundance, with its role as a trendsetting event, is important, too.”

The company is counting on press coverage of the spa with celebrities sporting aerie camis and leggings, as well as word of mouth from the stylists and tastemakers who attend the film festival.

Aerie.com will provide a window onto the rarefied world of Sundance, the pampering of and pandering to stars, and, of course, the all-important swag. “We’re doing a full multichannel expression of our Sundance participation,” Savitt said. “While our guests enjoy aerie spa, we’ll bring those experiences to life on ae.com and in our stores. We’ll show scenes from the spa to our AE White Out party on Jan. 20, where we’ll have performances by 30 Seconds to Mars and DJ Samantha Ronson. It’s part of our 360-degree approach to marketing and a way for our customers to connect with a major cultural event.”

Aerie, which last fall experimented with a new advertising format during the WB’s Tuesday prime time lineup, is working on another TV vehicle. “That was our first toe in the water,” Savitt said. “You’ll see us taking that further. We’ll be more relevant, entertaining and disruptive. You will see AE on television in 2007.”

Asked whether the marketing programs are more economical than traditional advertising, Savitt said, “We’re generating as good or better value at this time of year going with experiential marketing than doing a traditional TV spot.”