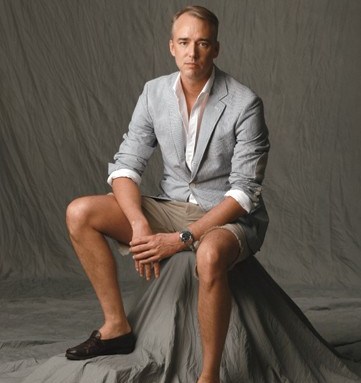 Michael Bastian has been waving the American flag for five years, on his mission to renovate classic American casualwear while celebrating iconic American men and narratives. His early collections channeled Kennedys, Jaws and Colorado ski bums.

This year, the New York–based designer’s horizons became more global as he found inspiration in Latin America for spring, and in British skinheads for fall. He also launched a collection with Gant, a Swedish brand of American heritage.

“The main thing that’s changed is it’s no longer just about me and what I want to wear,” says Bastian over a light afternoon repast in a Greenwich Village trattoria.

As a former fashion director of Bergdorf Goodman Men, he perceived a shortage of slimmeddown, snappy Americana at the luxury level, and set out to create it. Designer Brunello Cucinelli agreed to produce it with some of the finest materials and craftsmanship in Italy, and Bergdorf was supportive. Bastian took off, always in pursuit of the perfect twist on the classic. He loaded collections with color, cheerful motifs and alluring cuts, but always left the iconic aspect intact. Bestsellers included wing-logoed polo shirts, cashmere intarsia sweaters and sawed-off chinos.

Bastian was his own muse: An all-American guy with a downtown social life, who remains a little attached to college, who is no fashion plate but has an authentic style that others covet. That approach has propelled the label into more than 55 stores worldwide, and more than $3 million in annual sales.

“But at a certain point, even I get bored with me. It needs to be relevant to a lot of different guys in different cities, different countries, different ages. I’ve hired a deputy creative director who’s in his 20s, and it’s good to have his point of view,” says Bastian, who is 44. “And sometimes it’s good to take a little trip. I obviously have no desire to be a skinhead, but what if we had a British customer who was once a skinhead and is now a banker or something? That was the idea. It was our first baby step toward being a little more conceptual. It has to happen. It’s healthy.”

Original skinheads were united by style, not politics or race. Their look motivated Bastian to dabble in bleach-stained denim, black leather, tartans and militant accessories. These were just the newest ingredients stirred into Bastian’s eclectic show styling, a fairly consistent mix of prep, grunge, sport and more.

Meanwhile, for the launch of Gant by Michael Bastian, he worked a theme of lacrosse, the oldest team sport in North America. The New York presentation was staged in an old school gymnasium, where all the elements of a stylish post-collegiate wardrobe were modeled in a locker room tableaux vivant. Windowpane blazers, slim corduroys and plaid shirts dressed up more athletic pieces adorned with lacrosse sticks.

Designing two collections at once, he says, “makes you split your personality, which is not so hard for me because I’m a Libra. And it allowed us to spin off some of the ideas we always loved but were too expensive. We always wanted to have the perfect gym shorts, but it would end up being $350, whereas now it’s $95. Certain things like that have very logically migrated to Gant.”

Bastian is sensitive to complaints about his designer prices, which have been exaggerated in the media. His own comparative analysis puts him in the middle of the pack, he says, and his prices refl ect the cost of producing in Solomeo, Italy, alongside Cucinelli’s designer collection. Anyway, he sees his customers as connoisseurs.

“Once a guy tries it on in a store and a salesperson is there to communicate what’s special about it, we don’t have a problem. They feel it, they get it and they keep coming back. That’s a good thing about men,” he says.

The collaboration with Gant will engage a quite different customer, at the contemporary level.

By way of analogy Bastian says: “If you love the Yankees, you can either watch the Yankees on TV or you can go to Yankee Stadium. It’s two different experiences. Both are valid.” And for devout fans of American sportswear, Michael Bastian is a pair of season tickets.