The May 22 benefit will stage a red-themed fashion show of gowns created for the occasion. 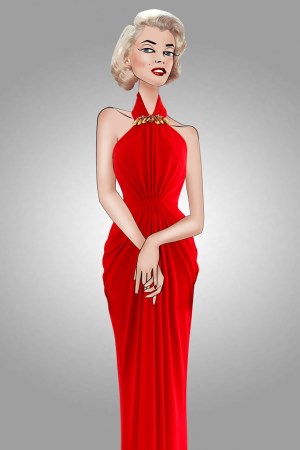 If Marilyn Monroe were still alive, she would surely wear red to this year’s Cinema Against AIDS gala.

The amfAR benefit on May 22, widely considered the social highlight of the annual Cannes Film Festival in France, will stage a red-themed fashion show of gowns created for the occasion. After shining a spotlight on the colors black and gold in previous years, Carine Roitfeld, who is overseeing the runway show for the third time, said she wanted to dedicate the show to Monroe.

“She searched for love all her life, and I think she would have been a big supporter of the foundation,” she told WWD.

Forty models — among them Karlie Kloss, Toni Garrn, Arizona Muse and Daria Strokous — will be in Cannes to present the collection.

“Some of the girls come at their own expense just to be part of the show,” said Roitfeld, adding that the event was designed to be upbeat.

“Charities are so sad, you often feel guilty attending them,” she remarked. “But it’s a party, and we are celebrating life.”

Other entertainment at this year’s gala will include performances by Lana Del Rey and Aloe Blacc.

Sharon Stone, known for her impromptu corralling of attendees into the fund-raising effort, said Robin Thicke will also be in attendance, and she hopes he “will allow us to auction off to some lucky lady a special kiss.”

Stone, who is amfAR’s global fund-raising chairman, teased: “Of course, that is just one in the deck of fun things that can happen.”

Joking aside, Stone pointed out that nevirapine, the drug that stops mother-to-child HIV transmission through birth, came to fruition through the research grants raised by amfAR. Since 1985, the organization has invested more than $366 million in its programs and awarded grants to more than 2,000 research teams worldwide.

“You have to remember there was no AIDS research field 30 years ago. It didn’t exist,” said amfAR chairman Kenneth Cole, who has been with the organization since the beginning. “We had to start from nothing; from not even knowing what was causing a disease that was a death sentence, we now have six classes of drugs that allow people to live a relatively normal lifespan. And four of those drug classes have their roots in research funded by amfAR.”

Cole said although there is still no cure or vaccine, he is more optimistic than ever.

“We know that a cure is technically possible because it has already been achieved in an adult and a child,” he noted. “At amfAR, we’re upping the ante with a new initiative called ‘Countdown to a Cure.’ Our goal is to develop the scientific basis for a cure for HIV by 2020.”

The previous two fashion collections, which went under the hammer straight from the runway, raised $2 million. Other lots at the auction traditionally conducted by Stone previously included a trip to space with Leonardo DiCaprio and a kiss from George Clooney.

“But my favorite was a photo session with Karl Lagerfeld,” divulged Roitfeld. “I don’t remember how much it fetched, but it was very, very expensive. I looked at Karl and he was so happy — he looked like a little boy. You think that he has done everything and seen everything, but he didn’t expect this, he was surprised. All these stars and celebrities, they come here and they bid, because they like a surprise,” she added, summing up the event’s pulling power.

This year’s event will be chaired by heavyweights from cinema and fashion including John Travolta, Milla Jovovich, Harvey Weinstein and Carla Bruni-Sarkozy, ambassador of Bulgari, the Rome-based jeweler, which is joined by Worldview Entertainment and Bold Film as presenting sponsors.

In addition, Roitfeld put together an exclusive retrospective of Pirelli pictures spanning 50 years to entertain guests at the Hôtel du Cap-Eden-Roc, while Moncler is throwing an after party.