Product innovation and the look of luxury were key statements of this month's fall and transitional market. 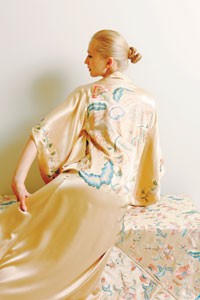 NEW YORK — Product innovation and the look of luxury were key statements of this month’s fall and transitional market.

February is expected to become a pivotal time for the industry when vendors consolidate the January and March markets beginning in 2007. The condensed February edition next year will combine traditional warmwear business with the fashion segments of the bra, daywear, sleepwear and at-homewear markets.

The climate of change was evident at Madison Avenue showrooms, where major stores finalized fall buys, as well as at the three-day Lingerie Americas trade show, which drew more than 3,000 visitors. The transition also was apparent at the industry’s annual Femmy Awards gala, staged for the first time at the Chelsea Piers and honoring Maidenform Inc., Wal-Mart Inc. and Invista.

Given the short time frame between the early January fall market and this late fall transition edition, which ran from Feb. 27 to March 3, industry executives were initially concerned about retailer turnout, especially from out-of-town stores.

But vendors and merchants generally said first-quarter lingerie business has been strong, and a number of retailers credited an abundance of new ideas. The action on the selling floor is being driven by a wider range of fashion colors, fabric mixes that create unusual textures and trompe l’oeil effects, and special treatments such as shirring, ruching, pleating, faggoting, beading and piping. Understated embroideries and appliqués are also generating consumer interest, said retailers.

Top-booking ideas for fall include:

Buyers from major department stores, specialty boutiques and e-commerce businesses said they attended both the January and February markets and were pleased with a plethora of new concepts and merchandise presentations. In some cases, merchants previewed ideas and strategies for spring 2007.

Mary Krug, vice president and divisional merchandise manager of intimate apparel and hosiery at Neiman Marcus, said, “We came back in February because almost all of the sleepwear vendors were showing the second half of fall. In some cases, we previewed foundations for spring, but we already previewed a lot of spring in Paris.”

Krug said a key classification for the Neiman’s customer is “couture-quality” lingerie from brands Moschino, Dolce & Gabbana and Leigh Bantivoglio.

Maureen Stabnau, senior vice president of merchandising at Bare Necessities, a four-unit specialty chain based in Avenel, N.J., said, “In January, I tried to get a feel of what was going on in the sleepwear market, but in February, I spent a lot of time in both the bra and sleepwear markets. Either manufacturers had a lot of new product or they didn’t. The hottest segment of the bra market was the better-price brands like Chantelle, Wacoal, Simone Perele, Prima Donna and Fantasie of England.”

Addressing consumer demand for lingerie, Stabnau said, “There’s a big difference in the quality of a $20 bra and a $50 bra. The American consumer is willing to spend more money on upscale and designer bras because of exposure on shows like Oprah. The consumer also is looking more to shapewear, because dresses are hot for spring. But it has to be updated, seamless shapewear by lines like BodyWrap, Spanx and Cass & Co.”

Stabnau added that orders were placed with three vendors she described as “great” at Lingerie Americas: sports bras by Moving Comfort and two sleepwear labels, PJ Salvage and Scanty.

Karen Fritts, owner of lingerie boutique Loretta’s in Plano, Tex., said, “I think it was a good market, and there seemed to be a lot of people. Our store’s focus is on bras, and that’s where I spent 75 percent of my time, in foundations.”

Fritts singled out Chantelle as “having a good fit in terms of a wide size range, and a variety of basic-looking bras and some fashion bras. I’m also interested in Prima Donna and will bring it into my store for the first time.”

She also cited the fall collection by Simone Perele as looking “beautiful” and noted that bras for smaller figures by Huit have been selling “extremely well” at retail.

At the Lingerie Americas show, several buyers said they were impressed with the selection of fashion merchandise and upscale brands.

Lesley St. James, co-owner of Luxe Lingerie in Beverly Hills, said she was looking for crossover items that had a “very sexy, edgy appeal.” She said two brands fulfilled that look: I.E. Sarrieri, a high-end line from Romania, and Andre Sardas, an upscale Spanish label.

Yolaida Duran, co-owner of Alla Prima, a lingerie and swimwear shop in San Francisco, said, “We rediscovered lines we had fallen out of touch with, but we found a couple of new lines like Lebkoff, which was understated luxury, and Andre Sardas, which we adored. Elle Macpherson Intimates is beautiful, and talk about well priced. I think we are going to buy EMI in a bigger way this [fall] season.”

Magie Crystal, co-owner of Alla Prima, singled out two brands for “elegance and luxury”: Argentovivo, which she said had an “amazing bustier, completely beaded with a sash that gave an Empire look, in claret,” and Clos, a young designer line.

Susan Sedgley, owner of Romantiques Lingerie, a specialty boutique in Los Gatos, Calif., said, “We were looking for bras with larger-busted cups for a younger woman, and we found it with Aubade and Rigby & Peller. We also loved [foundations and daywear] by I.E. Sarrieri and Les Caprices de Marie, and sleepwear by Skin, which takes a lot of ideas from ready-to-wear and is very hip-looking.”

Rebecca Apsan, owner of La Petite Coquette, a lingerie boutique in Manhattan, said she was looking for intimates for full-figured women.

“Of course, I bought brands I always carry like Argentovivo, Jane Woolrich and Leigh Bantivoglio,” Apsan said. “But I wish Lingerie Americas had carried more products for what I call curvy girls, plus sizes. Maybe they will next time.”