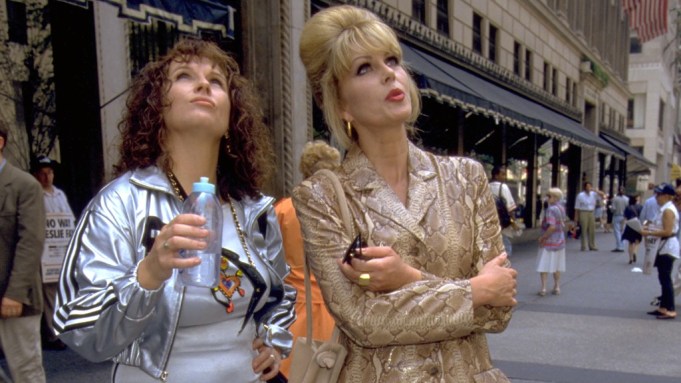 “In essence it really sort of stayed the same,” says costume designer Sarah Burns of Edina Monsoon’s style over the years. Burns worked on the series from 1992 to 1997 and returned for the new episodes. “The thing I did do with Edina this time was I wanted very much to give her specific ‘block looks,’ we called it, so it gave the impression that she’s been styled rather than it being an eclectic mixture of things. What has changed fashionwise here most certainly is the kind of eclectic things not matching, things clashing, things being worn tight, nonfashion is fashion. Edina’s style really is out there in a way, hers was always extraordinary, but it has really sort of…it’s on the streets. I wanted to change it from being that to these kind of block looks.”

As for Edina’s co-hort, Burns says: “Patsy’s whole feel was effortlessly chic with Betty Jackson. And then, when a case occurs in the script, she tips into this sort of more vampy rock chic. But that’s what we’ve always done with them.”