An Intimate Farewell for Andrée Putman

Some 250 people gathered to pay their respects Wednesday at the Benedictine Abbey of Saint-Germain-des-Prés. 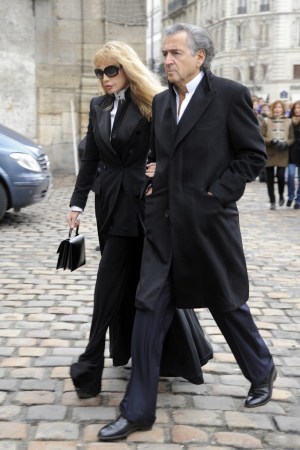 PARIS — Andrée Putman was given an intimate farewell Wednesday at the Benedictine Abbey of Saint-Germain-des-Prés.

It was in the neighborhood where the interior designer, who died this past weekend at the age of 87, had spent all her colorful life, mingling with the likes of Pablo Picasso, Simone de Beauvoir, Georges Perec and Alberto Giacometti.

Some 250 people gathered to pay their respects and exchange anecdotes about a woman they described as smart, engaging and fun.

The setting was as minimalist as Putman’s signature style, which consisted of “black on black, leather perfecto, high heels and plenty of jewelry, mostly large necklaces and lots of bangles,” recalled Martine Sitbon, the designer behind Rue du Mail. “She was androgynous and feminine at the same time — very couture, but in a modern way.”

“What Coco Chanel was to fashion, Andrée Putman was to design,” said Jean-Charles de Castelbajac, whose career Putman helped jump-start when as a young man he managed to box his way through to her to show her three of his early sketches.

“It’s so great that you’re here,” exclaimed Ines de la Fressange at the sight of a WWD reporter. “People don’t realize how influential she was, not just in the world of design but fashion. François Hollande should be here.”

The French president did not show, but Jack Lang, for whom Putman designed an office when he was France’s culture minister, came. Lang remembered the late designer for “her singular talent to decipher the codes of space before she transformed them….Her name was synonymous with elegance, refinement, harmony and intelligence.”

Industrial designer José Levy compared Putman to “a sphinx — very mysterious all the time and very deep. Small talk was not her thing,” he said.

The simple coffin in blond wood was flanked by two large vases filled with white rose blossoms mounted into large balls of flowers. In large letters, the ribbon read “Karl Lagerfeld.” Putman had designed the interiors for Lagerfeld’s homes and boutiques.