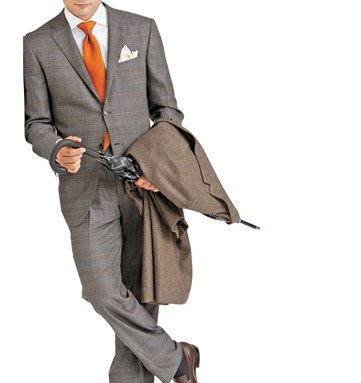 That’s the result of a nationwide survey conducted last week by Global Strategy Group for DNR, a follow-up to a survey the research firm conducted for this magazine in August. That earlier, in-depth study into the shopping behaviors and attitudes of American men had further compelling insights—including the fact that most American men buy most of their own clothes and most American men actually enjoy the shopping experience. (The financial crisis of this month had only had a slight impact on the spending habits reported in the August and September surveys: In the earlier survey, 25 percent of respondents said they are spending more than a year ago, 42 percent said the same amount, and 34 percent said less—meaning the financial shocks shifted only about 3 percent of respondents from the “more” column to the “same” column.)

DNR’s findings may come as a surprise to observers raised on the stereotype of the fashion-averse male avoiding as much contact with the wardrobing process as possible, leaving sartorial matters in the hands of mothers, spouses, sisters or kind strangers.

“I’m amazed at that figure. Boy, have things changed,” says Ari Hoffman, CEO of Gant USA. “I always thought it used to be closer to 50 percent of guys who bought their own clothes. I think it’s great that guys are doing their own shopping, because that’s how you develop your own personal sense of style.”

Much of that change revealed by the DNR study may be linked to the economic, sociological and cultural changes of the past few generations, such as ever-larger numbers of women in the work force, men marrying later in life and shifting ideas of masculinity.

“I really do think things have changed dramatically over the past 10 years. Guys are not relying on their female counterparts as much anymore,” notes designer John Bartlett, who is the creative director of the Claiborne by John Bartlett label as well as the proprietor of his own specialty men’s store in New York. “My brother-in-law works in downtown Cincinnati and at lunch he goes shopping with his buddies. He loves it and he’s an everyday kind of guy.”

Of course, like beauty, a nice outfit is in the eye of the beholder, and men’s wear insiders aren’t quite buying most guys’ confident self-assessment. “In my opinion, most guys are not very well dressed,” sniffs Hoffman. “I think the survey would have been very different if you asked guys to judge each other.”

Men’s wear designer Joseph Abboud estimates that 40 percent of American men could count as well-dressed by his standards. “And I’m being generous,” he notes. “Just sit in any airport and look at the guys walking by and I think you’ll agree.”

Despite the large number of men who are engaged in the fashion and shopping process, there remains a core group of guys who are steadfastly numb to (what we consider) the exciting world of men’s wear. Nineteen percent of survey respondents call themselves fashion-phobic and 18 percent admit that they are fashion disasters.

“You know what? I admire that 18 percent,” says Abboud. “Because you have to know yourself to change yourself. That’s the starting point.”

While the DNR survey reveals a typical male consumer that is more conversant in clothes than in recent memory—and more confident in his wardrobe and shopping choices than some observers might expect—there is a limit to that heightened interest. When asked what they would do with a $5,000 lottery winning, 43 percent of guys said they would splurge on a 60-inch flat-screen television and another 24 percent said they would hit Las Vegas. Only 15 percent would choose a brand-new wardrobe—but at least that beat a gift for mom, chosen by 11 percent, and tickets to the World Series, picked by 7 percent.