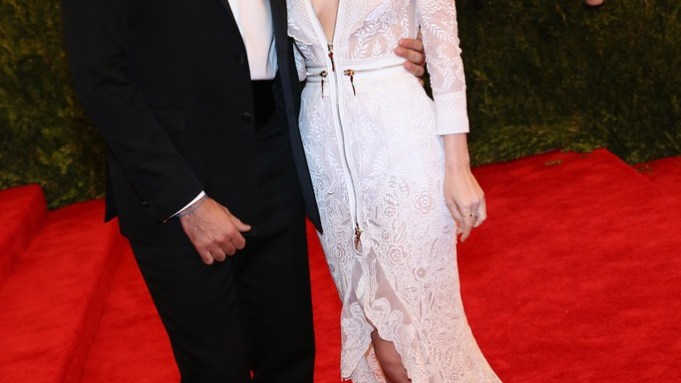 It is an 80-block walk, give or take, from 315 Bowery, that long-ago home of CBGB and New York punk’s spiritual stomping grounds, to the steps of the Metropolitan Museum of Art. But attendees at the Costume Institute gala at the Met, which this year celebrated “Punk: Chaos to Couture,” did their best to bring the spirit of ’77 with them to the Upper East Side, where some wore it on their sleeves and others in mind-set.

Among those on hand were honorary chair Beyoncé, as well as cochairs Rooney Mara, Riccardo Tisci, Lauren Santo Domingo of Moda Operandi and Anna Wintour. Asked if he expected any punk behavior from the guests, Tisci played the anxious host early in the evening.

“I hope not,” the Givenchy designer said before joining Wintour and Mara atop the museum’s grand staircase to greet guests at the end of a line of models dressed in their safety-pinned finest. One popular model at the top of the stairs wore a bleached Mohawk and red leather jacket scrawled with “The Government is Lying.”

“I hope a lot is going to happen, but nothing bad,” Tisci said.

As guests made their way into the exhibit, many couldn’t help but stop and gawk at one of its centerpieces, a reconstruction of the bathroom at CBGB. Jennifer Lawrence and Marion Cotillard, arriving with Raf Simons and both in Dior, took it all in.

“I want to go sit in there,” Lawrence quipped.

Miley Cyrus worked a sheer Marc Jacobs dress and punky spikes. The safety pin in her ear was there all the time, she said. “I feel like everybody gets to be a little brave tonight,” she said of her outfit.

Mayor Michael Bloomberg promised he wouldn’t kick anyone out for acting a punk.

Plenty of the punk old guard took the opportunity to speak on a movement nearing its 40th birthday.

“It’s never died and that’s punk,” said Debbie Harry. Madonna was there to see Harry: “I’m a huge fan of hers. She’s a true punker. She’s been a great inspiration for me.”

David Byrne had a different take when asked if he expected any antics on the evening: “I think it’s all in the past.…The bad behavior is all downtown Wall Street these days.”

RELATED STORY: First Look at ‘Punk’ at the Met >>

As cocktail hour drew to a close, Vivienne Westwood, a woman as responsible as anyone for the punk aesthetic, worked her way into the exhibit.

“I was into punk for justice — it was the look of the urban guerrilla…that’s why I’m wearing this for Bradley Manning,” she pointed to a large picture of the jailed Army private, accused of leaking scores of documents to WikiLeaks, pinned to her shoulder.

A few feet down the hallway from Westwood, a small bottleneck of later arrivals included Kim Kardashian and Kanye West and Carey Mulligan. Gwyneth Paltrow squealed with delight upon seeing a friend. Shortly thereafter, the trumpets signaling dinner began to blow and the group headed downstairs.