Yiqing Yin, Fausto Puglisi and Iris van Herpen are among nominees vying for the award. 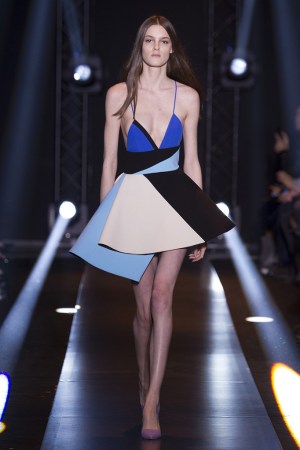 The others vying for the annual prize are Rad Hourani, Jean-Paul Lespagnard, Yiqing Yin, Steven Tai and Études Studio.

The winner is to be revealed on July 3, with the victor pocketing 250,000 euros, or $341,712 at current exchange, along with a year of mentoring from François-Henri Pinault, chairman and chief executive officer of Kering, who is to advise on matters including financial, legal, marketing, communications and production.

The prize package also includes a purchase order from Hudson’s Bay Company, plus 10,000 euros, or $13,669, worth of crystals from Swarovski.

Founded in 1989 by Nathalie Dufour, with the support of the French culture and industry ministries and with former Yves Saint Laurent couture boss Pierre Bergé as president, ANDAM has been a springboard for an array of designers who went on to achieve international recognition, including Martin Margiela, Viktor & Rolf, Christophe Lemaire, Jeremy Scott, Gareth Pugh and, most recently, Alexandre Mattiussi.

The prize is also seen as a vehicle to attract talented designers of any nationality to set up shop in Paris, a hub of specialty ateliers and a beacon for international press and buyers.

“One of them is bound to become a French company,” Dufour noted.

Sicily-born Puglisi, who has a signature label and also designs Emanuel Ungaro, said, “France is very close to my heart and French fashion is a never-ending source of inspiration for me.”

Marking its 25th anniversary this year, ANDAM widened its network of corporate partners and tapped them to provide know-how in addition to financial support.

All seven finalists, an international group, are to receive makeup artistry support from MAC Cosmetics; advice on digital strategies from Fashion GPS; a landing-page showcase on e-tailer TheCorner.com, and a dedicated workshop in Swarovski’s showroom.

They are to evaluate the seven finalists on their creative and business potential, with the winner chosen by majority vote.

ANDAM also named three finalists for its First Collections prize, valued at 75,000 euros, or $102,514. They are Coperni, Gauchère and Monographie, with the victor also receiving a commercial and strategic mentorship from the Tomorrow showroom, and an exclusive space in Galeries Lafayette’s flagship store in Paris to present two collections.

ANDAM, the French acronym for the National Association for the Development of the Fashion Arts, plans to mark its silver anniversary with a retrospective exhibition, a party during Paris Fashion Week this fall, plus other collaborations with sponsors and previous winners, as reported.