The independent designers are carving out space for sustainable fashion — keeping it stimulating and taking it online.

PARIS —The hand-wringing started well before the coronavirus pandemic hit. Can the fashion industry learn to become more sustainable? How is it possible to ensure a future for independent labels?

ANDAM winners Marine Serre and Y/Project designer Glenn Martens have some answers to these questions, which have only become more urgent — and complicated — in the wake of the coronavirus crisis.

Winners of the ANDAM family fund award, revealed last week — Serre’s namesake label got 200,000 euros and Y/Project was awarded 150,000 euros — they now also have additional industry backing to spur their independent labels along at this difficult juncture.

WWD spoke with each of the two winners of the award, which served as a reset this year — pivoting to a channel of support from the traditional prize competition of previous editions.

“This prize arrives at a very different stage than the first prize I won three years ago,” Serre said.

“It really means a lot because it’s helping us to stay fully independent,” she added.

Organizers of ANDAM, France’s oldest fashion prize, said in April that they would forgo the traditional format and focus on a handful of French companies to help them adapt to the fresh challenge brought on by COVID-19. The idea was to identify viable projects for working through the crisis to build a future, and step in to help, providing both financial and mentoring support.

ANDAM’s pivot came amid others, with the CFDA and Vogue setting up a fund-raising campaign for designers called “A Common Thread,” while LVMH Prize organizers distributed 40,000 euros to eight finalists rather than allotting the full funds to one winner.

ANDAM’s jury is made up of top brass from leading luxury companies, including Kering chairman and chief executive officer François-Henri Pinault and Chanel president Bruno Pavlovsky, as well as executives from LVMH Moët Hennessy Louis Vuitton and Hermès International.

“It’s always a great honor that they think the work you’re doing is worth being there and they help you and push you — it’s a nice confirmation that you’re going in the right direction,” said Martens, who described ANDAM as having “one of the most influential, business-minded” juries.

“Creativity is part of it, but it’s really about the whole concept of creativity and business,” he said.

When the label won the prize three years ago, it was a growing brand.

“We had no money, no investors, no money injection, so the problem always with growing brands, is that there’s no treasury — whenever you have a better sale or a better season, you have to invest the money you get from clients in production — your prepayment is actually not covering that production, so there’s always a struggle,” he said.

The injection of funds provided by Andam three years ago allowed the label to invest in more senior positions and recruit commercial and production directors.

“That really was the turning point because having more senior people in your company really helps you to build it up in a more proper and adult way,” he said. 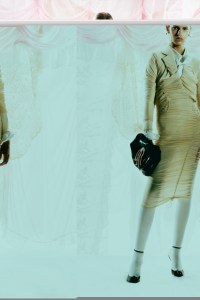 This time, funds will be used to boost some key projects at Y/Project — the Evergreen line, a virtual showroom and the ecommerce site.

The fresh funds will now help the label set the projects on the same path of stabilization — as he calls it — that the brand as a whole has recently reached, Martens said.

“With Y/Project, the great thing about us is that we just became young adults so actually we’re quite stabilized,” he said, compared to younger labels just starting out.

Serre said her label plans to deepen its focus on projects they had identified earlier on.

“We have a lot of really important topics that we were trying to develop since the beginning of the  brand,” she said, referring to the label’s “eco-futurist” approach of working toward a circular model —around half of the collection is made up of upcycled garments.

“Before COVID-19, we were in a really, really good situation with that and people were starting to understand and to also like it,” she added.

But things got more complicated as the crisis hit.

Some processes became more difficult as the label works with suppliers around the world to source unused garments — the designer issued upcycling films during the lockdown, showing piles of jeans from the U.S. being transformed into new pieces.

“It was really challenging to make a simple fabric during the COVID-19,” she noted.

The funds will help her label push further on environmental topics.

“It will help us for sure go toward climate neutrality. We are also wanting to go for since the beginning, but we went step by step and it’s clearly something we were going to start just before the COVID-19,”  she said.

At Y/Project, the label plans to use funds from the award to develop the eco-friendly Evergreen line, which Martens describes as a collection based on carryover styles of characteristic and symbolic Y/Project designs, with the personal twist developed over the years.

“We really respect the garments, and on top of that, it’s a collection that’s fully produced in the most ethical and sustainable way, so everything is certified — the factory is certified, it’s quite a big process, we’ve been working on it for a year almost,” he said.

“We’re not like those kind of conglomerates with an army of people able to do all this research — it’s all the same people who have to do the job here,” he said, citing the search for more ways to treat denim, with air pressure, for example.

They also want to add new classics to expand the line.

The label is also launching a new e-commerce site, which will carry a lot of content about the Evergreen line and the versatility of the transformable pieces, how they are made and where — with a focus more on craftsmanship than the creative people being them. The “why and how and who,” he said.

“It will be a lot about educating also our customers specifically with the Evergreen line because there’s also going to be a transparency policy linked to it, explaining why the pieces are there, how expensive they are, this kind of thing,” he said, noting that the label tries to align the prices of Evergreen pieces with the main collection. A long tailored wool coat, carries a retail price of around 1,200 euros while a basic shirt is priced around 300 euros, while denim pieces range from 350 to 450 euros, for example.

“We have a bit of tailoring, couture — actually very multidimensional in garments, not one dimensional. To curate this diversity, you really have to dig deeper into the brand to really understand it,” he added.

“A lot of dreams are behind it and I think we have to go back to that and explain it to people, not everybody is working in the business, not everybody is able to be as privileged as we are to go to fashion week and understand it,” he said.

The “Internet is a great platform to explain all the crazy stories behind it,” he added.

The label launched a film last week that shows different garments being adjusted on models — a body-hugging miniskirt becomes a long dress with a collar on top, and panels on trousers and tops that gets unbuttoned and peeled back to reveal different layers.

“There’s going to be a whole focus on showing that versatility and explaining how you can experiment, and try to own a piece and make it closest to your personality — those versatile garments are supposed to grow on you — you really have to ask yourself ‘How do I want to wear this dress?’ ‘How do I feel today?’ ‘How do I want to be perceived?’ and often the dress has different answers,” he explained.

Most retail stores understand the label’s diverse approach and how to select things, but he is expecting e-commerce will be able to help the brand to “reinforce the rich and diverse world that we are representing,” as he put it.

Martens envisions a platform where one can “buy everything, the more couture pieces, and not just the happy bestsellers, it’s also the more intriguing pieces [that] are maybe more difficult to find worldwide, and I think, thanks to the web site, it’s also gonna be reachable,” he said.

“I’ve been talking to so many stores during COVID-19, and some people are actually fed up with coming to Paris like six times a year,” he said.

“I’m sure there are also alternative ways to see your brand, to sell your clothes, along with the physical showrooms,” he continued.

“Everybody, especially independent designers, is having the same challenge; the pace is very fast, we work in an extremely fast pace, especially brands like us, which are doing four collections a year. It sometimes gets a bit crazy,” he said. The problem is that collections don’t always stay very long on the sales floor and don’t always fit the season.

“I think maybe we have to work on a different way of presenting the clothes, maybe in a different seasonal situation,” the designer suggested.

“I have seen so many people around me that had lived and thrived on a system [that] was more superficial and more commercial and more product orientated, and…I think this crisis, the whole fact that they were locked up for two months made people reflect more and go a little bit more to the essence,” he said.

“I do think that this is also going to be translated in the fashion indsutry and I believe that a lot of intriguing young creative brands have a base to survive,” he said.

“It’s going to be difficult times for everybody, maybe we have to step back a bit but do it in an enjoyable, happy way,” concluded Martens.