While the designer's lineup lacked cohesiveness, there was no shortage on drama. 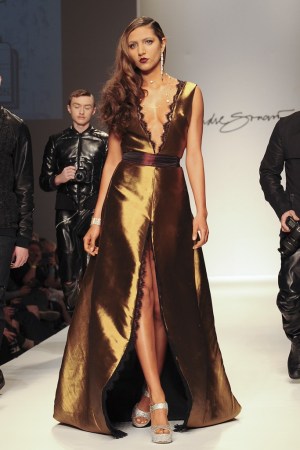 Andre Soriano named his collection “Screen Sirens” and started his show with a black-and-white short film starring the first model out. She then appeared on the runway, surrounded by male models dressed as paparazzi. Further hammering the theme, the soundtrack featured audio excerpts from the Academy Awards, i.e., Jean Dujardin saying, “And the winner is…Jennifer Lawrence.” What followed was a parade of gowns as diverse as the actresses announced. Some, including the black, white and jewel-toned satin numbers, were classy but others, like a russet taffeta gown with gold lace bodice and peplum, were tarted-up and not exactly red-carpet ready.

This story first appeared in the March 12, 2014 issue of WWD. Subscribe Today.

While this lineup lacked cohesiveness, there was no shortage on drama. For the finale look, the music switched to “Ave Maria” and a model appeared in a huge black ballgown, weeping and clutching a rosary.