Andres Sarda, among Spain's best-known luxury lingerie firms, wants to grow its U.S. business with a first introduction of its high-end, made-to-order line for spring. 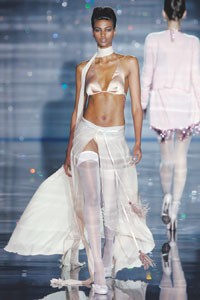 BARCELONA — Andrés Sardá, among Spain’s best-known luxury lingerie firms, wants to grow its U.S. business with a first introduction of its high-end, made-to-order line for spring.

The $100 million company’s goal is to increase its presence at high-end stores in the U.S. by 30 percent during the next year with the new collection, said Vincenc Gaul, export manager. The Sardá company has been selling its secondary Risk and University lingerie labels, as well as Andrés Sardá swimwear in the U.S. since 2004. Overall wholesale sales in the U.S. total $500,000. Exports account for 40 percent of the company’s volume worldwide.

The upscale collection, which is available by special order at upscale stores such as Henri Bendel in New York and Harrods in London, is described by designer Andrés Sardá as a fairy-tale collection — “Sleeping Beauty Meets the Ice Queen.” Each style showcases the craftsmanship of the brand with a sprinkle of Swarovski crystals on embroidered sheer lace garments, batwing capes and mink boleros,

as eveningwear. A key detail is Sardá’s trademark printed lace embellished with motifs including bold tropical flowers and butterflies.

“Of course, it’s easy at the start with a new product,” explained Gaul. “But it’s maintaining that momentum that will be the challenge.”