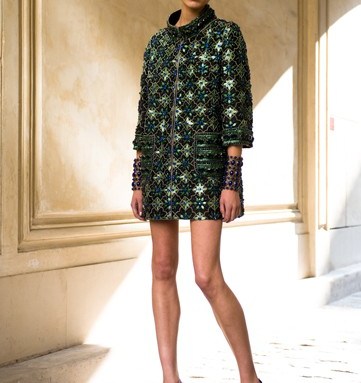 Known for his attention to detail and dedication to luxury, Andrew Gn knew it was just a matter of time before he elevated his designs to the next level and introduced a full-scale made-to-measure line.

“I’ve always worked with couture-level details,” explains the Singapore-born, Paris-based designer. “Customers were asking me for it. And not just one or two, but a lot of them.”

This season Gn will present what he calls Atelier, a made-to-measure luxury collection he named as a tribute to the ateliers with which he works in Italy and France. “They are capable of making the most exquisite pieces,” he said. “We’ve established this relation of trust and it was time to use their talent in a new way.”

Gn said prices for the pieces, to be available on order, would start around $15,000 for a simple jacket and exceed $100,000 for elaborate coats and dresses.

“It’s superluxe,” shrugged Gn. “It will be limited edition — only one or two pieces of any model in a city. When a woman is paying that kind of money to dress, she doesn’t want see another woman wearing the same outfit.”

Gn’s business has thrived recently. He said sales this year should increase by around 20 percent and reach about 14 million euros, or $20.2 million at current exchange.

“I believe that you must give a reason to women to buy,” said Gn. “My customers already have everything in their wardrobe. They need something exciting.”

Gn has a proclivity for fine things. He collects fine porcelain and 18th-century art and furniture. His love of rarity and beauty translates into the way he makes clothes.

“We design all of our fabrics, embroideries and make all of our buttons and trimmings,” he explains. “It can become very elaborate. And that’s just ready-to-wear. Now we can even go further with the made-to-measure.”

Gn said some 15 pieces of the line would highlight his show here on Oct. 1, which he said was inspired by Helena Rubinstein “coming back from India.”

“She was a perfect combination of an aesthete and a businesswoman,” said Gn. “She was a real woman. A mix of the classic and the contemporary.”

In other words, Gn’s perfect muse.