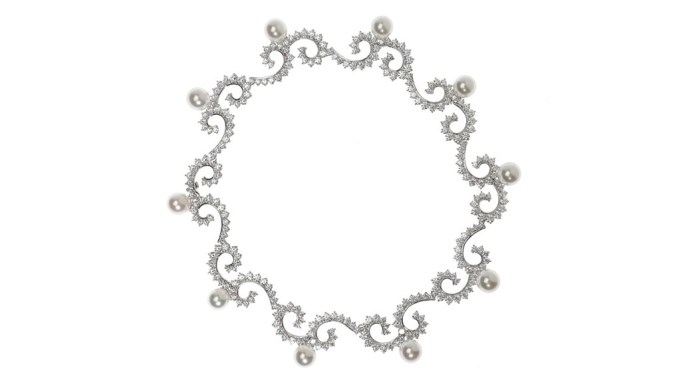 Since leaving behind the jewelry world in 2003, Angela Cummings moved from Greenwich, Conn., to an idyllic spot near Park City, Utah, where she started to paint and hike, enjoying the serenity of living in the mountains. But like most creatives, there was that constant itch to design again.

“I lived a perfectly happy life but wasn’t doing anything, and I like to work,” Cummings recalled. “I can’t help it, I missed designing. I enjoy the process of things being made for other people.”

When Lawrence Lewis 3rd, chief executive officer of Assael, which supplies some of the most exquisite pearls in the world, reached out to Michele “Mickey” Ateyeh, Cummings’ best friend and longtime business partner, the designer jumped at the opportunity to do a collaboration. Now, several months later, the Angela Cummings for Assael collection is set to launch April 11 at a soiree at the Grill Room in the Four Seasons restaurant.

“Angela brings incredible design,” Lewis noted. “She helps make pearls even more relevant. Her jewelry is also a wonderful backdrop for our pearls. You love the design, but you also love the pearl, and one is not distracting from the other.”

Ateyeh said Cummings was approached for various projects over the years, but “for her to do something, it had to be really be right and true to who Angela is, and how she could contribute something unique with her talent.” Assael had been a wholesale client of Cummings, so she knew the company well. “Before I knew it,” Ateyeh added, “we had 25 exquisite designs that married Angela’s philosophy, her talent and her interests on the design side with these spectacular pearls.”

Cummings started her career as a design assistant at Tiffany & Co. in 1968 and became one of the Fifth Avenue jeweler’s key designers before branching out on her own in 1984. She became known for her strong craftsmanship and a signature interlocking clasp. At its height in the mid-Nineties, the Angela Cummings brand was sold in about 35 doors, including Bergdorf Goodman, where she had an in-store boutique in a prominent spot on the main floor.

Assael’s Lewis had long admired Cummings’ work. “We wanted a designer who wasn’t going to create a design that would overpower the pearls, but in fact showcase them,” he said. “It had to be a happy marriage for us between the beautiful designs as well as the pearls. We sent her quite a few pearls to play with, and she came back with a collection of renderings that were basically inspired by the pearls that she had in hand.”

He declined to disclose sales projections. After the official launch party, Angela Cummings for Assael will be available at Neiman Marcus, Richards of Greenwich and Mitchells of Westport in Connecticut, as well as several specialty upscale fine jewelry stores. It’s not a one-off collaboration. “We are already in production of the second collection, we have a third collection waiting and more beyond that,” Lewis noted.

Cummings says the design process hasn’t changed since she last created pieces 10 years ago, only that she is now more focused on pearls. “There is no end to creativity when using pearls in jewelry,” Cummings said, adding that this collaboration is “a dream job.

“I can live in the mountains, do my work and come to New York every once in a while,” she said. “I can be creative and do what I do well.” Plus, she added, “I have my own hours.”