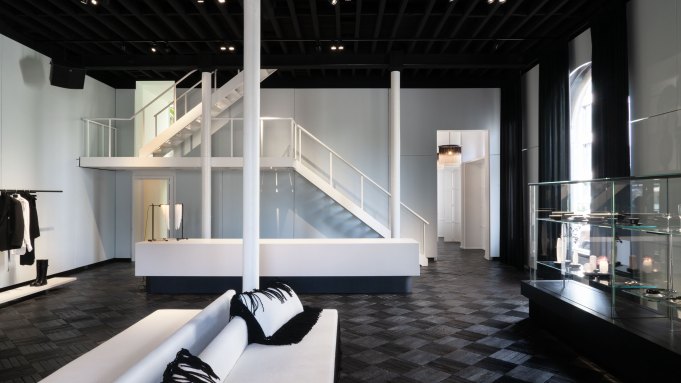 Fashion is more than ever taking pride of place in Antwerp and on Thursday at the center of it all was Ann Demeulemeester — both the fashion label and its founder.

Not only were her designs highlighted in the overhauled MoMu fashion museum but the flagship of her namesake brand, now under the ownership of Claudio Antonioli, was being unveiled that evening.

“My history is over there, and the new [chapter] is here. It’s a long way since I came out of the Academy in 1981 — and it’s not finished,” said the Belgian designer, taking in the store and the first guests discovering the extensive renovation masterminded by her husband Patrick Robyn. “It’s like everything is falling into place,” she added.

Although starting over after 22 years would have been a daunting prospect for most, Robyn relished the challenge and the city’s changing landscape. “When we first had this shop [in 1999], it had been a school for seamen, then a laboratory for agricultural research. The old neighborhood was neglected. But I liked the idea to have a shop outside of the commercial center,” he said, reminiscing about how the building became the epicenter of the Ann Demeulemeester world — once rid of its excess of scientific material, multitude of walls and crumbling staircases, of course.

Since then the neighborhood has come alive with trendy restaurants, a handful of stores, but most importantly, the city’s Royal Museum of Fine Arts and its stately Neoclassical building, a “beautiful neighbor” who “helps [the brand] receiving clients without them feeling like consumers,” Robyn said.

Stepping into the store into the artfully designed light — a combination of energy-efficient LED lights and natural light filtered through lightweight black curtains — certainly doesn’t feel transactional, despite the abundance of items on display.

Robyn paid particular attention to this, working with a lighting specialist who had advised museums to achieve a soft, crisp light that brought out details, such as the palest blue of the walls or the subtle lilac of a low chair, belying the initial impression of a store in black and white.

The effect worked equally well on bright hues, as proved with the addition of two opulent bouquets, sent by friends Raf Simons and Dries Van Noten, whose gradient blue spray of delphiniums Demeulemeester recognized on sight.

The Belgian designer’s latest project, the homeware and lights line developed with Belgian brand Serax since 2019, occupies a 20-foot-long glass cabinet that catches the eye upon entry.

It was Antonioli who first suggested bringing Demeulemeester’s old and new lives together in the flagship. “At first, I wondered if putting a plate and a jacket together made sense. But then I realized that it’s all the same soul, so maybe it’s beautiful,” the designer said.

As for a brief, there hadn’t been one. “When you have 100 percent trust, you are 100 percent engaged,” Robyn said, a sentiment Antonioli later echoed in the same words.

The open volumes of the store feel inviting, as if stepping into a home, albeit a highly designed one, in keeping with Robyn’s belief of clothing purchase being an intimate experience.

“Everything you see here, we designed. Every cushion, every table, every glass, everything,” Demeulemeester said, adding that the courtyard’s plants were perfect as nature had made them, but that they’d still come from the family garden.

For those who fall under the spell of the furniture, both Robyn and Demeulemeester kept referring to them as “prototypes,” hinting that they, too, may be one day able to leave their home for those of customers’.

It may sound like an of-the-moment consideration, at a time where retail is evolving under the conjoined forces of e-commerce and current pandemic-related conditions, but this is an expression of Robyn — and Demeulemeester’s — long-standing vision of retail.

“People tend to buy souvenirs [when traveling] because they want to take home [a piece] of what they were feeling at that moment. That’s what inspired me about this way of selling clothes,” he said. “A shop today has to offer something that you cannot find online, and [one of those things is] giving people the time they need to buy something, because there is no feeling worse than the one of being a consumer.”

Cue the four airy dressing rooms he imagined, strategically dotted around the covered courtyard, which has been turned into a luxuriant fern-filled garden. They, too, benefit from the combination of natural and artificial lighting that brings out the full palette of nuances that exist in the Demeulemeester playbook, from textures to the black that dominates the fall collection in stores.

“So often when you go to a shop, we have this small changing room where you start sweating, with bad lighting and no mirror, where you’re more or less obliged to go out so that salespeople can start saying how wonderful you are,” Robyn said.

Here, there is no such pressure, not even with the presence of a cash register. Owing to the presence of the stairs, Robyn designed a beautiful counter with drawers that conceal unseemly keypads and screens.

Upstairs, the rails blend men’s and women’s items — clothes and accessories alike — into a continuous offering. This, too, felt of-the-moment while being a long-standing signature. “I always had men and women together in my shows, too, because I thought they looked more beautiful. Every possible combination is fantastic,” Demeulemeester said.

“When I go to a shop, [as a man] I enjoy women’s clothing just as much,” Robyn continued, adding that clear divisions gave him the impression of having missed part of a conversation.

Another conversation continued outside, owing to COVID-19 restrictions, under the awnings set up for a cocktail to celebrate the store’s new era. Antonioli confirmed plans to use the principles put out by Robyn as a blueprint for further stores, starting with New York, London and Milan openings on the table for the near future.

“It was really important for me to give them carte blanche,” said Antonioli, who folded the Belgian brand into Dreamers Factory, the Milan-based incubator he launched to host the brands he wants to support.

Beyond that, he demurred on future plans, noting that this particular moment, he favored an organic approach, with the sole focus of supporting the continued Ann Demeulemeester vision in a way that made all three of them happy.

“I’m sure we will have special projects where we find ways to let it all blend together. When you combine talents, you have magic,” said Demeulemeester, ending any speculation about her return to the label’s design studio, as friends came together to celebrate this new chapter.

As darkness settled over Antwerp, the store came alive through softly glowing windows, as guests crossed the street to enter the fine arts museum.

Closed for the past 12 years, the museum had opened its doors for a dinner to celebrate Demeulemeester — brand and designer — under the eyes of masterpieces by Belgium’s Renaissance masters.

“Are you happy? I am,” said both Demeulemeester and Robyn, minutes apart.