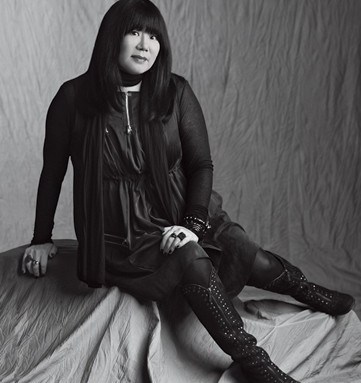 Anna Sui’s designs swing young and engagingly rock ’n’ roll; her image, edgy (never mind that, in fact, she’s plenty grounded). The walls of her showroom pulse with girly Goth deep purple. She dresses mostly in black, her long bangs nearly obscuring her eyes. No, Sui is not your typical lifetime achievement award winner. Rather, she is the first designer of the downtown persuasion to be so honored by the CFDA. The award recognizes Sui’s impressive trajectory in fashion and also the evolution of an industry that not all that long ago viewed young-and-cool as an essential, but often irritating, little sister to more grown-up mainstream American fashion.

This world has indeed changed dramatically since Sui set up shop in 1980, and she has been at the forefront of the evolution. Her fashion obsession started strong — growing up in Detroit, she once determined to go an entire year without repeating an outfit — and early on became entwined with her love of rock ’n’ roll music. “It’s all part of the same fantasy,” she says. So much so that when approaching a collection, Sui researches music as voraciously as fabrics.

An unofficial expert on pop culture past and present and a museum and flea market fanatic, Sui takes inspiration from diverse sources: Yves Saint Laurent, Aubrey Beardsley, the late-19th-century Aesthetic Movement, even Busby Berkeley (whose spectaculars she likens to glam rock: “To me it was the same, flirty and fun, with lots of color”), and, for her upcoming Target Designer Collaborations collection, the “Gossip Girl” contingent. Yet whatever the particulars, the overall mood typically salutes the Sixties and Seventies. “That was the initial spark,” she notes. “I thought the world would always be like that, full of revolutionary ideas.”

Sui has parlayed that spark into an unusual global business, managing quite remarkably to stay independent, apart from three distribution partnerships in Asia. The Anna Sui brand now encompasses ready-to-wear, accessories, shoes and beauty, including a whopping 12 fragrances (eight still in circulation, with another set to launch this fall). Yet her legacy-in-the-making already stands for even more. Sui, who sources and produces most of her collection in New York, has spearheaded the Save the Garment Center movement, becoming its heart and soul. “It’s what I know,” she says. “It’s what I love.”