The editor in chief of Vogue and artistic director of Condé Nast was interviewed by CBS Corp.'s chief executive officer. 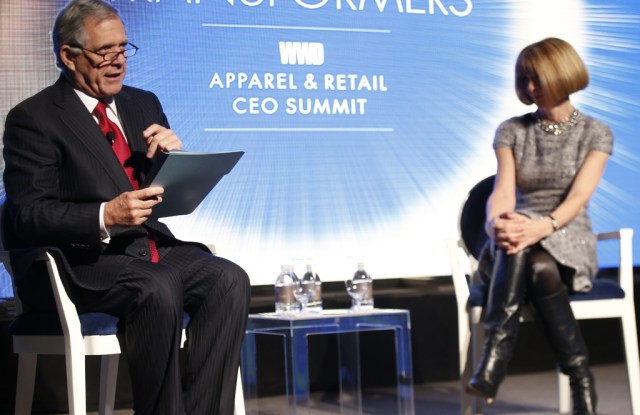 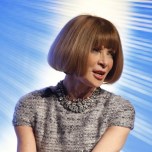 The task before Leslie Moonves, the chief executive officer of CBS Corp., was to interview Anna Wintour, the editor in chief of Vogue and artistic director of Condé Nast.

Moonves, whose portfolio includes the CBS broadcast network, the Showtime cable channel and Simon & Schuster, as well as a bevy of other major media outfits, described Wintour as “a leader of a great brand, and someone who shapes our culture in a very positive way.” And “someone who’s pretty famous for not suffering fools gladly,” he said, adding, “I’ll do my best to avoid that fate today.”

The ceo credited Vogue’s longevity to Wintour’s attention to detail. But he wondered if her new title of artistic director, which gives her oversight of all of Condé’s titles, would allow her to be as hands-on.

“I don’t think I am that hands-on,” she said. “I’m much more of a believer in finding a great team of people and trusting them to follow their instincts. They work better when they feel they have freedom and they are trusted. Nothing gives me greater pleasure when a great shoot or a great article comes in and it’s absolutely got nothing to do with what we discussed but it’s much better.”

Later on, Wintour expanded on her views about management now that she’s in a position of even greater influence within Condé to alter the direction and leadership of magazines other than her own.

“In my new role, the thing that is most important to me is to protect and support the editors, because it is a vision of the editor that creates a great magazine and if you don’t have that vision working at its fullest strength, the magazine is going to suffer.”

The school of management according to Wintour is fairly straightforward, she said, and is derived from her father, Charles Wintour, the former editor of the Evening Standard of London.

“I think possibly what people working for one hate the most is indecision. Even if I’m completely unsure, I’ll pretend I know exactly what I’m talking about and make a decision,” she said. “The most important thing I can do is try and make myself very clearly understood.”

Wintour was named artistic director in March, a development that had been in the works by Condé senior management for some time, as WWD first reported.

Echoing the remarks at the time by Condé ceo Charles Townsend, Wintour also looked to last year’s WWD CEO Summit as the place where the idea of a broad title like artistic director took root.

“A group of us were at The Plaza listening to Karl Lagerfeld talk about what it was to be the artistic director of Chanel, and as he was describing his role as being a free thinker, creative force, someone who roams the corridors of the world and bringing everything back to Chanel in a way only Karl can. Fortunately for me, some lightbulb went off in Chuck Townsend’s head, and very soon after that he talked to me about a similar role at Condé Nast.”

As executives of legacy media companies upended by the Internet, Wintour and Moonves share some common concerns — and run in the same social circle.

“How do you deal with the Barry Dillers of the world?” Wintour asked Moonves. Diller, the chairman of IAC/InterActiveCorp, has been engaged in a fierce legal battle with broadcasters like CBS over a service he’s backing called Aereo that delivers broadcasters’ signal as a stream online without paying the lucrative retransmission fees. Diller, so far, has the upper hand, but the legality of the service is far from settled. Moonves, simultaneously, won a high-profile battle in September against Time Warner Cable to raise the fee the cable operator pays to retransmit CBS’ signal.

“Barry, who is a close friend of both of ours, is trying to steal our signal and send it out for free without paying for the content,” Moonves said. Neither CBS nor Vogue, he continued, should be giving away their goods for free. “The key for both of us is we create great premium content.”

Wintour said magazines too have benefited from the Internet and the explosion of distribution platforms because those disruptions have expanded their reach, though several times she underlined it’s still the print product that pays the bills.

“If you talk about the digital world, it’s the Wild West. The important thing to realize is that what works for print doesn’t necessarily work for digital. What we’re all doing is creating more content that is specific for different channels,” she said. “What we’ve all learned is that if you create similar content for your print magazine as you do for your Web site, it’s going to be much less successful.”

Moonves, addressing the impact of the Internet, added, “The difference in our business today is that we used to have one means of revenue, which was advertising. Now, we’re paid in so many different ways — we sell our product all over the world. We’re streaming online. We’re selling to Netflix. The same product now is spread out a great deal and more people see it. The great reason people are no longer denigrating what we do is we’re getting paid in a lot more different ways, and guess what, our revenues are rising.”

Wintour said Vogue has remained relevant because it’s stretched the traditional definition of a magazine.

Could she imagine a day when the print magazine won’t be the centerpiece of the Vogue universe?

“Like I said, it’s a Wild West out there. I would not dream of pretending that I understand where we’ll be in 25 years, but for the foreseeable, print is by far the most important part of our business.”

Moonves lobbed one freebie question about Wintour’s interest in tennis — “I went to Wimbledon before I could walk. It’s just been a lifelong passion,” she told him — before asking her for parting advice to the magazine and fashion industries.

“It’s very important to take risks. I think that research is very important, but in the end you have to work from your instinct and feeling and take those risks and be fearless,” Wintour said. “When I hear a company is being run by a team, my heart sinks, because you need to have that leader with a vision and heart that can move things forward.”