CHICAGO — Designer Anne Fontaine is building a global business on her fitted white shirts with a French flair.

The company bearing her name last month celebrated the opening of a boutique on Michigan Avenue here and an Atlanta location in... 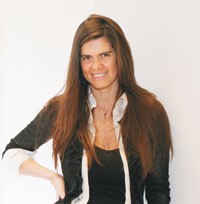 CHICAGO — Designer Anne Fontaine is building a global business on her fitted white shirts with a French flair.

The company bearing her name last month celebrated the opening of a boutique on Michigan Avenue here and an Atlanta location in Phipps Plaza. Another store is to make its debut at International Plaza in Tampa, Fla., this month.

Executives plan two additional Florida shops, in Naples and Bal Harbour in 2005, and locations at Short Hills, N.J., and King of Prussia, Pa., next year.

“The expansion is at the beginning and it is a natural process,” she said. “If we don’t expand, we regress.”

Anne Fontaine opened its first store in Paris in 1994. There are 21 locations in France and 18 in the U.S., as well as stores in the U.K., Belgium, the Netherlands, Switzerland, Germany, Israel and Japan.

U.S. stores average 1,000 square feet with sales in the range of $700 to $800 per square foot, Zlotkin said. Sales in the U.S. are estimated to hit $20 million to $25 million. Zlotkin predicted the Chicago location would be among the top three U.S. stores, along with boutiques in New York and San Francisco. Before the Chicago store opened, Anne Fontaine sent letters to some 2,000 clients in the Chicago area who had bought the designer’s shirts elsewhere.

“Many believed that we could not survive by doing white shirts only, [but] we always believed in our concept,” Zlotkin said. “As my wife says, ‘Every woman has a white shirt in her wardrobe.'”

Bestsellers include a double-collar, double-cuffed shirt for $195, a blue denim ruffled blouse that laces up the back retailing for $550 and a white version for $395.

Fontaine sometimes veers from her all-white formula, as in the denim blouse and a $150 black quilted jacket.

Each season, Fontaine introduces 80 new designs, 80 percent of which are white; some are black and a few possess a select color of the season.

Fontaine has said she tried to wear color but it never felt right. In turn, she sticks with white and black, noting that white symbolizes good luck in her native Brazil.

Sandy Matthews of Chicago first saw Fontaine’s creations in Paris seven years ago. She bought five items to add to her collection of four Fontaine shirts. “You can wear them with a pair of blue jeans or with a very sophisticated evening dinner suit or even with those long, full colorful skirts with rhinestones.”