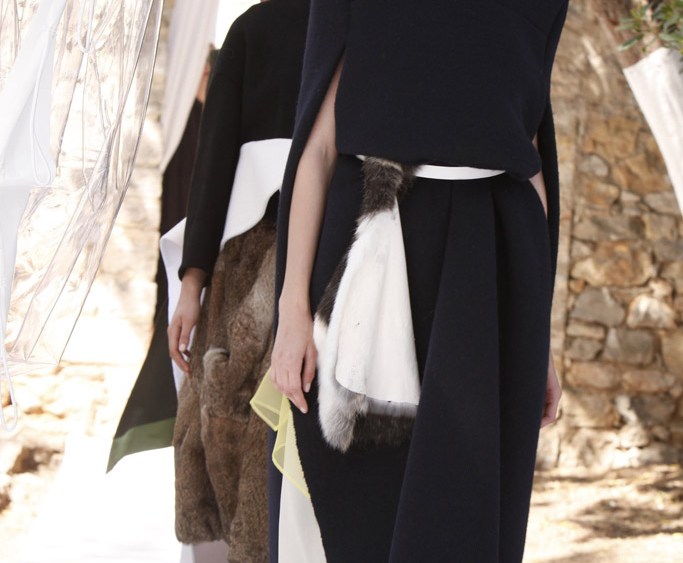 HYÈRES, France — Annelie Schubert has scooped the Première Vision Grand Prize at the 30th edition of the Hyères International Festival of Fashion and Photography.

The 28-year-old designer — who did a bachelor’s degree in applied science in Hamburg, an internship with Haider Ackermann in Antwerp and master’s studies at Weissensee Kunsthochschulen in Berlin — impressed judges with her sculptural silhouettes hinged on an open back.

“We liked her work right away. She uses fabrics such as Neoprene and tweeds. There is a beautiful color palette; it is very elegant, very refined,” commented Chanel’s Virginie Viard, who sat on the fashion jury with the likes of Princess Caroline of Hanover, Anthony Vaccarello, Carine Roitfeld and Caroline de Maigret.

“She has paid great attention to the back, sides; she did the most sculptural collection,” said Vaccarello, the Hyères winner in 2006. “There was a lot of Neoprene — even though I am not a big fan of Neoprene — it was a good idea to pair it with natural fabrics.”

“The idea was to play with the apron-style silhouette, to transform it into something elegant and opulent; to combine elegance and casual for outerwear with covered front and open back. You see the different layers underneath,” Schubert explained.

The designer said she has long wanted to try her luck at the Hyères competition, which has been a springboard for designers such as Viktor & Rolf. “I thought it was the right time in my master’s degree,” said Schubert, whose dream is “to have a job in a house first. It would be great.”

Schubert was one of 10 international designers competing for the prize, valued at 15,000 euros, or $16,308 at current exchange, a list that was whittled down from around 400 applicants. She is also awarded the chance to work with the specialty ateliers that Chanel controls through its Paraffection subsidiary, a prize also valued at 15,000 euros.

Chloé, a major partner of the festival for the past four years, awarded 15,000 euros to German designer Anna Bornhold.

Dutch candidate Wieke Sinnige from the Netherlands received a jury’s special mention, a grant of a collaborative project with some of Chanel’s specialty ateliers valued at 10,000 euros, or $10,872.

Highlights of the four-day-long festival included a master class with Karl Lagerfeld, the festival’s artistic director this year, and a roundtable on Instagram. Speakers included Jean-Charles de Castelbajac, Simon Porte Jacquemus and Felipe Oliveira Baptista, who presided over the fashion jury in 2013 and is also a past Hyères winner.