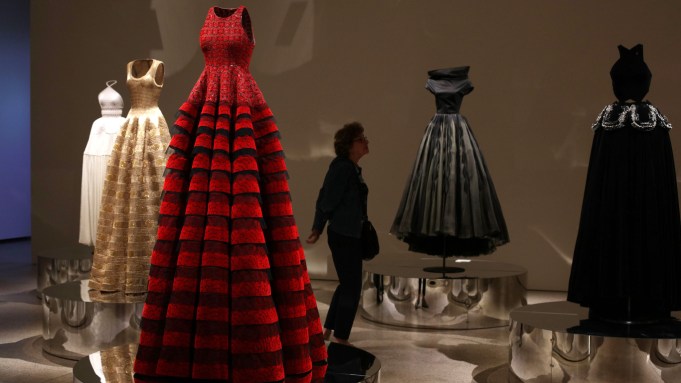 LONDON — The Design Museum has been taking fashion to heart with two shows that celebrate curves and sculptural shapes: The Loewe Craft Prize, which opened last week with help from Jonathan Anderson and Helen Mirren, and “Azzedine Alaïa: The Couturier,” the first display of the late designer’s work in London. Opening Thursday, the exhibition comes just two weeks after the opening of the first Maison Alaïa store on Bond Street.

More than 60 of Alaïa’s greatest hits have gone on show at the Holland Park venue in Kensington — the long, spiraling zipper dress, the buttery leather pieces winking with metal grommets, and the fine knife pleats and gossamer knots on the couturier’s timeless designs.

The classical hand of Alaïa, who had been working on the show when he died suddenly in November, is everywhere, from the spare and sculptural silhouettes to the sophisticated engineering — as in a delicate miniskirt made from a tough stretch of stingray skin — to the custom-made mannequins.

Just don’t call it a retrospective, argued Mark Wilson, who cocurated the show with Alaïa. “It couldn’t be — the space is only 850 square meters [9,150 square feet]. We couldn’t do a retrospective here.”

He wasn’t exaggerating: According to Alaïa’s friend Carla Sozzani, the designer’s archive contains 22,000 pieces of clothing. She and her team haven’t even begun to count or catalogue the accessories he made, or Alaïa’s collection of pieces by Balenciaga, Charles James, Vionnet, Paul Poiret and Madame Grès.

Wilson, chief curator of the Groninger Museum in the Netherlands who’d worked with Alaïa on six previous shows of his work, said he pitched this latest one to the designer as “an installation,” and quickly added, “I didn’t want to freak him out, but in my own mind I saw this as an Alaïa temple.”

The point of the show is to highlight cut, seaming and all of the details that went — and continue to go into — the clothing made by Alaïa, whom Wilson refers to as “the master perfectionist. This is an opportunity to see all the variation in how he refined and refined and refined.” The show was always going to go on following Alaïa’s death, he added.

“I was adamant that the show go forward. It was superimportant to me because I love him so much,” he said.

Loosely grouped by theme, the looks stand out against a series of textured, translucent panels custom-made by Alaïa’s friends Ronan and Erwan Bouroullec, Konstantin Grcic, Marc Newson and Kris Ruhs. Their brief, according to Wilson, was to channel Alaïa’s laser cuts, and the aim was to have the panels — shiny, mirrored or matte with cutout patterns — dialogue with the clothes.

Alaïa’s partner, the artist Christoph von Weyhe, created colorful paintings of some of the dresses. “I didn’t sketch anything out. It was all spontaneous,” said von Weyhe, who designed the first, hand-painted Alaïa label, and in the Eighties created prints for the designer.

The show demonstrates Alaïa’s passion for purity, his talents for subtraction — rather than addition — and for lending an air of delicacy to tough materials — a light sweep of black leather for an apron dress or a sharp, a lizardlike tail on a short jacket, or layers of soft, rubber-printed fabric for a white pouf of a dress.

“You feel his respect for women in these clothes,” said Sozzani. “They’re never over the top.”

The show skewed a little too minimal at times and could have done with fabric descriptions, techniques employed and inspirations. Who wore the pieces? Supermodels, opera singers, pop stars, red-carpet dwellers? So much creativity flowed from Alaïa’s head and hands it’s a shame his motivations and techniques weren’t brought to light more — especially in a museum that’s meant to highlight craft and design.

“Azzedine Alaïa: The Couturier” runs until Oct. 7. It will coincide with another Paris show that Sozzani, a cofounder of the Azzedine Alaïa Association (soon to be a foundation), is planning for July.

The title of the Paris show will be “The Alchemy of a Collection,” and the aim is to spotlight the 12 months of work ahead of a collection launch. Like “Azzedine Alaïa: Je suis couturier,” which opened in January and runs until June 10, the July show will take place at 18 Rue de la Verrerie, the gallery adjoining the designer’s studio and historic boutique.