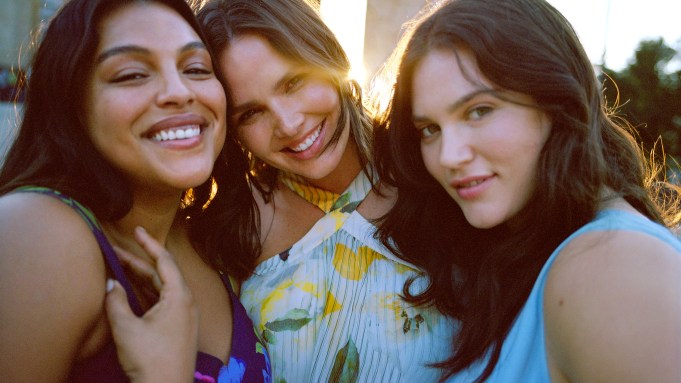 Anthropologie’s curated marketplace of eclectic global shopping delights is about to get more inclusive.

On March 15, the retailer will introduce APlus by Anthropologie for sizes 16W to 26W, a new category of clothing offering the same trends, prints, fabrics and details as the store’s petite and standard size assortments. Roughly 120 pieces will be available in 10 store locations in the U.S. and Canada and Anthropologie.com, with a March 12 Thai-themed launch party slated for L.A.’s Sunset Tower Hotel to court Hollywood stylists and social media tastemakers.

“Inclusive sizing is something I knew when I arrived that we would want to do, but we had to focus on getting our foundation reset before we started to build that business,” said Hillary Super of the first new category to launch since she took over in April 2018 as copresident of the Philadelphia-based Anthropologie Group, following the departure of six-year chief executive officer David McCreight. “We want our customer to be her very best just as she is, at any size. I didn’t like the idea that someone felt like she couldn’t participate. We wanted to be thoughtful about all of the elements, the digital experience, the store experience, the offering, and we took time to think through all it.”

Anthropologie is somewhat late to the size-inclusive game, following other mall mainstays such as J. Crew and Nordstrom, as well as luxury players 11 Honoré, which showed at New York Fashion Week. But Super hopes customers will think it was worth the wait. “All of our key fashion messages within the core Anthro brand will be offered in plus sizes, so if we are standing for wide-legs and sleeve interest, that exact trend will be in plus,” she explained, noting that all styles were fit on a size 20W fit model to ensure they look good in the entire range. The launch is 80 percent in-house designed pieces. “But we have also had an incredible response from market partners already producing plus sizes, and some that are new.” Easy-wear Cloth and Stone pieces are part of the initial offering as are styles of DL1961 premium denim, with prices for APlus ranging from $48 to $260.

“Trend wise, March is the peak of our daytime occasion product, so there is a large focus on dresses, the DNA of our brand, and soft skirts,” she said, noting that the retailer already had an existing customer base that self-identifies as plus.

In stores, the category will be presented similar to petites, with about 1,000 square feet per door, and its own “visible footprint, not crammed in the back which is often the case,” Super said. At the Rockefeller Center flagship, APlus will be featured in store windows at launch.

The corresponding marketing campaign features a video of models Ali Tate, Candice Huffine and Paloma Elsesser in a swirl of color and print, adventuring through the streets of Mexico City. The category is being launched entirely through the retailer’s stores, web site, social channels, mobile app, e-mails and catalogues, without any traditional advertising “to optimize our closeness with our customer,” the executive said.

Having the kick-off event in Los Angeles is a homecoming for Super, who was raised in Southern California, is a graduate of USC and owns a mid-century home in Palm Springs that she travels to monthly. “L.A. is the center of what’s going on in the U.S. right now,” she said, singling out Anthropologie’s newest large-format store — the brand has a total of 10 now — opened at the newly renovated Westfield Century City mall, as well as the vibrant art scene that spawned the first Frieze L.A. art fair at Paramount Studios earlier this month as focus pullers.

Prior to joining the Anthropologie brand, Super spent 24 years as a merchant for The Gap, Old Navy, American Eagle and Guess. Most recently, she worked at Maris Collective, a luxury resort retail start-up, leading all aspects of product, stores and business development.

At Anthropologie, she is working to keep the largest concept of the Urban Outfitters group by revenue a bright spot in a tough retail environment, betting that it can compete with Amazon and fast-fashion giants with its global curation of partner brands and artisans offering everything from Farm Rio for Anthropologie bolero dresses from Brazil, to Tracy Reese pants from New York to linen pillowcases from Portugal, alongside in-house designed offerings. (Super works in partnership with copresident Andrew Carnie, who oversees home and garden.)

The chain closed the fiscal year with sales valued in $1.5 billion, 8.5 percent more than in the previous year, taking 40.7 percent of the total revenue of the Urban Outfitters company. Anthropologie has 227 stores in the U.S., Canada and Europe, which is a new area of expansion under the leadership of former Jigsaw ceo Peter Ruis, who joined as managing director of international in July. With 11 stores already in the U.K., the retailer opened its first in Spain this month, on Barcelona’s Pasea de Gracia.

“Our differentiated offer is making the difference, that and our close symbiotic relationship with customers,” said Super, adding that the core is age 30 to 45, a demographic that has traditionally been underserved in fashion. “Our customer gives live feedback on social, in surveys and focus groups, but nothing replaces one-on-one contact. I am in the stores every week,” she said, sharing a recent memorable experience in the Glendale store with a group of over-40s who were clued into her role with the company by a sales associate. “They told me about their needs.…Like all of our customers they lead full, busy lives — they are moms, they work, they travel — and they need clothes to suit a variety of occasions and events. They want to look pretty, and they want clothes that make them look and feel their best. They also look to us for a flattering, thoughtful fit.” And now, whatever their size, they’ll get it.