“As a brand, we are attacked every day. I spend a lot of time dealing with that.”

PARIS — Given that it hangs in the Paris showroom of Yves Salomon, you’d be inclined to think that the fluffy yellow jacket — part of the brand’s spring 2020 collection — is made of fur, the house’s signature material.

“It’s actually shearling,” Salomon said. “In the last two years, fur has only represented half of our production.”

The furrier has slowly been reducing the use of traditional fur in its collections, pivoting toward less controversial materials such as shearling, leather, wool and cashmere, partly in response to the anti-fur backlash that has been causing turmoil in the industry, with many luxury brands going fur-free.

“As a brand, we are attacked every day. I spend a lot of time dealing with that,” said the label’s managing director, despite adding that the issue hasn’t affected orders from other fashion houses. Yves Salomon is also a fur supplier in addition to a fashion brand, which represents 10 percent of its sales.

“There is still a large number of fashion houses for which fur remains a big part of their commercial activity and who are continuing to work with us,” said Salomon, adding that business was also helped by the introduction of fur to certain men’s lines, such as the Dior men’s fall 2019 collection by Kim Jones. “But our main challenge at Yves Salomon is to continue to survive in a crazily aggressive climate, both in terms of business and in terms of image.”

As a result, the brand has decided to push its sub line YS Army, a Millennial-oriented ready-to-wear collection created in 2005.

In September, Yves Salomon will transform its 750-square-foot Parisian flagship on the Rue Saint-Honoré into the first dedicated YS Army boutique, which will be completely redesigned to reflect the line’s streetwear aesthetic.

“We aim to position ourselves as outerwear specialists,” explained Salomon, adding that the brand is planning to roll out the new retail concept to some of its other points of sale worldwide in the near future.

Designed by a separate studio, the YS Army line, which this season is also debuting a new logo and graphic identity, largely eschews the zibeline, fox, rabbit and mink pelts used in Yves Salomon’s main collection.

“The Army line represents a completely different universe — a lot more street-oriented — with different materials and new branding,” explained Salomon, gesturing to a new YS Army label on the line’s latest introduction, a collection of six lightweight nylon raincoats with technical details, for men and women. 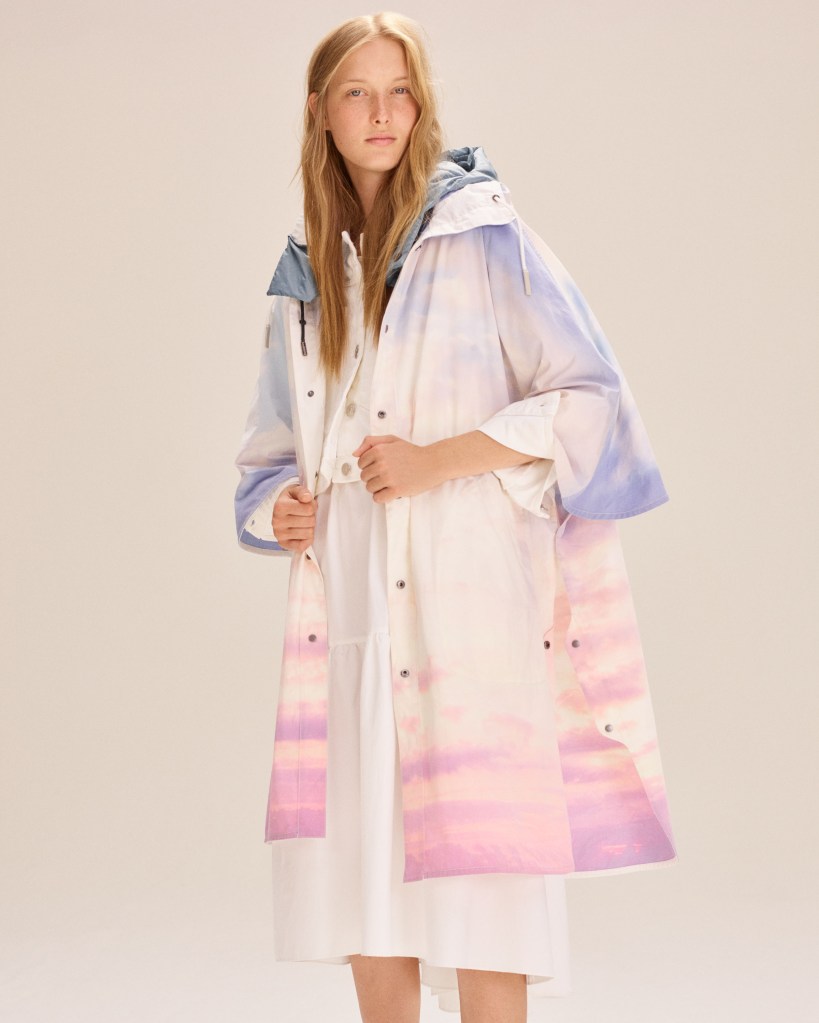 With its Army line, Yves Salomon aims to reposition itself as an outerwear brand.  Courtesy

“We want to show customers that Yves Salomon is evolving and that as a brand we are capable of doing other things outside of fur,” he said. “It’s frustrating that I spend most of my time trying to defend my business, but it’s also quite exciting. It pushes you to be creative, to come up with new products and ideas to express the brand’s identity.”

While business is split evenly between both lines, YS Army has seen an increase in its men’s and kid’s sales. The YS Army children’s line was introduced in 2015 and features the same styles and color ranges as the adult collections.

Yves Salomon also has a line of upcycled fur silhouettes named Pieces, for which collaborators are invited to delve into the brand’s archive and re-create garments using some of its stock. Photographer André Walker created a collection for the brand in March. Now in its second year, Pieces is also seen as a way to educate consumers about the durability of fur.

“Pieces isn’t a commercial project; the diffusion of the collection is quite limited,” Salomon said. “It’s more of a creative exercise and a project on the concept of upcycling in order to get people acquainted with the fact that fur is recyclable and durable. We’re thinking about reaching out to fashion schools for our next editions.”

The executive made it clear the pivot in the brand’s strategy doesn’t mean it plans to give up fur completely.

“People don’t realize that our practices are strictly regulated in the direction of animal welfare and that the fur industry is an ancient craftsmanship that we need to preserve,” he said.

“All the fur we source is controlled by Fur Mark, a strict independent certification program that checks on animal welfare but also allows complete traceability from beginning to end, something that fashion houses are increasingly requesting,” he continued.

“We’re hoping certifications will become mandatory: They are vital to the survival of the profession, as they discourage the proliferation of unregulated parallel industries. The more we can prove that our industry is clean and transparent, the better.”

VIDEO: A Tour of Third Love’s New Flagship in Manhattan