Antonio Marras: From Finance to Fashion

The designer plays outside fashion’s traditional lines — and that’s just the way he likes it. 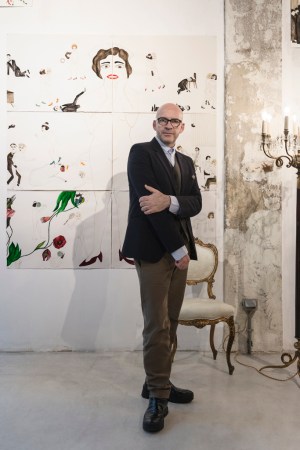 For anyone who has marveled at his shows, the personal tales behind his carefully detailed collections, or his fanciful and imaginative sets, it’s hard to think of Antonio Marras as a bean counter.

Yet at the beginning of his work life, the designer gravitated toward finance—a professional life behind a bank teller’s window.

“I’m sure I would have made lots of clients happy, handing them the wrong change, giving them more money than I was meant to,” Marras chuckles, his self-effacing manner a rare trait in the ego-rich fashion industry.

His father, Efisio, had hoped his son would go into accounting, but that plan changed when he took over the family’s textile shop in Alghero, Sardinia, after Efisio died in the Seventies.

Marras, 54, is even more surprised at his easy relationship with money when he recalls his early days at the store, which he later transformed into a fashion boutique. “What budgets? I followed my instinct and I would just buy what I liked—racks of Moschino or Jean Paul Gaultier.”

But make no mistake: Despite his claims of being a “terrone,” a colloquial term for someone from the south of Italy, superstitious and a fatalist, Marras has an almost Calvinist approach to his work.

“My Laboratorio collection, all sewn and embroidered in Sardinia, is a procedure and a method that only a madman would take on,” says the designer, showing a short dress embroidered with a dazzling number of beads and crystals that are comparable to haute couture.

In fact, Marras was invited to show a couture collection in Rome in 1996 and, to that end, he took apart his uncle’s wardrobe, re-creating striking gowns from men’s suits, cutting and stitching together scraps from different looks.

Today, in his Circolo Marras showroom in Milan, surrounded by flea-market mirrors and rugs he designs in an artisanal style typical of Sardinia, sitting on a Paola Lenti chaise lounge he upholstered—interiors being one of his passions—Marras muses on his wish to return to couture. At the same time, he’s mulling taking on a financial partner.

“Until now, I wasn’t even willing to listen to any proposal, I was entirely closed to the idea. Patrizia [his wife, who is chief executive officer] and I decide on everything, but this has a cost, it requires economic commitment and sacrifice. I’m starting to think that I’d like to be unburdened by bureaucratic and financial tasks. I’m now ready to evaluate the possibility of a partner.”

Marras says he realizes his designs must be “more visible and available. A dress is not an end in itself, otherwise it’s just an object. I am interested clothes that are worn, they must live.”

The designer segues, expressing his distaste for pigeonholing. “Niche is limiting, I don’t like the concept, I never understood it. I believe there is a larger number of people who could appreciate the work I do. It’s easier to dub someone or something ethical or minimal, but I don’t believe in that. I was born minimal but I just can’t do it. I like simple lines, but I adore interventions, contrasts, going beyond limits, and cross-pollination. I like to see the transformation, to change things so that they become different.”

Enter his self-described “mania” with fabrics, washed and treated in different ways—and mistakes that can be fixed. “Beauty can come from ugly things. This intrigues me, and gives me the most satisfaction.”

Marras is something of a fashion outsider, “an anomaly in the system,” as he puts it. He spends about a week a month in Milan, where he has staff manning the showroom, but continues to live and work in his hometown of Alghero, “an island on the island,” he says, where locals speak Catalan. He points to the “cultural stratification and strategic position” of Sardinia, conquered through centuries by the Romans, the French the Spaniards, and others. He admits to being strongly influenced by this mix of cultures and traditions in a region with a deep textile and jewelry heritage, as well as his childhood spent by the sea. “Those who are born on an island know their boundaries. The sea is a limit, but also makes you want to travel, to escape, to discover…and there is always that wish to return. I would never think to move.”

Three Efisio Marras boutiques still stand in Alghero, from the first single textile shop, which Marras revolutionized with a mix of “luck and recklessness.” He pointed out, for example, that he was the first to bring Fiorucci to Sardinia. Now they sell Antonio Marras and other lines.

“One of my suppliers kept prodding me to design a fashion collection. I thought he was crazy,” says Marras. At the insistence of his wife, Marras launched a line in 1987 under the Piano Piano Dolce Carlotta label, a translation of the title of the 1964 Bette Davis film Hush…Hush, Sweet Charlotte—movies being another passion.

The line was unveiled at trade show Milano Vende Moda (now Mipap). “But boredom is my personal monster,” he says, and “the collection had become a shopping list of garments.” The designer recalls he almost quit the fashion business, until he received the invitation from Rome’s couture organizing body. That 1996 collection sparked curiosity. “Industrialists started to call me, they were curious but perhaps also terrified—‘How could we do a coat with 25 different swatches of fabrics?’” he says in mock-astonishment.

His signature collection, previously produced by BVM SpA, for which he designed Les Copains and Gibò, is currently manufactured by Castor.

In 2007, he launched I’m Isola Marras, first produced by Interfashion, owned by Stefanel Group. The line is now manufactured by Loma and costs about 40 percent less than the signature collection.

Global sales are about $11 million for the company, which counts five stores: two in Russia, in a deal with Bosco di Ciliegi; one in Kuwait with Al Ostoura, and one each in Milan and Alghero. The signature line is carried at around 140 multibrand stores, while I’m Isola Marras is available at around 300 doors. He also sells men’s wear, bags and shoes, and has collaborated with home goods firms for wallpaper and upholstery fabrics. Marras aims to expand in the U.S. and China, and e-commerce began on his Web site about a year ago.

Marras, who was also artistic director of Kenzo from 2003 to 2011, confesses he never longed to become a designer, much less the aforementioned banker. “Rather, I wanted to go to art school and work with my hands.” Although he never went to fashion school or art school, he received an honorary degree from the Brera Academy of Art in 2013.

Art remains a strong draw and inspiration for Marras. “During my first trip to Milan, when I was 14 years old, I saw Lucio Fontana’s [cut canvas] and I was enchanted. How could one strong incision touch me so and leave such a mark on me? I was amazed. That was the beginning of my curiosity for art,” says Marras, who sketches as he speaks, and enjoys painting.

His store, Nonostante Marras, holds frequent art shows, curated by art critic and writer Francesca Alfano Miglietti. Until last month, for example, there was a show on Italian painter Carol Rama, to whom Marras dedicated his spring line.

Literature is also a major inspiration; his 2015 resort collection was inspired by the Nobel Prize–winning Chilean poet Pablo Neruda. And Marras’ first namesake collection in 1999 was dedicated to Swiss writer and photographer Annemarie Schwarzenbach, who recorded her drive to India through Iran and Afghanistan at the onset of World War II.

Last February, Italian model and actress Benedetta Barzini, now in her 70s, was his muse for fall. Marras wrote a love letter in the show notes, and Barzini was the final exit. (She also walked the designer’s first show in 1999, in a room he filled with trees and wooden planks.) The fall venue was the latest spectacular set, as Marras transformed a Milan garage into a Trianon-Versailles-like salon, brimming with paintings, rugs and chandeliers.

“The show is a topical moment, where I harmonize all that I like, from art to music and cinema, which help visualize my vision,” says Marras, asked for his thoughts on runway shows at a time when many question their relevance. “It’s not calculated. It’s an important element to
tell a story.”