While Italy and France were competing on the soccer pitch on Sunday, Puma and Adidas were battling it out for brand supremacy.

By Whitney Beckett and Damien McGuinness on July 12, 2006
View Slideshow 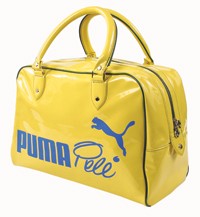 NEW YORK — As Italy and France played for soccer supremacy on Sunday, another battle was being waged.

The athletic giants Puma, sponsoring the victorious Italian team, and Adidas, outfitting the French, along with Nike, have been vying to be the World Cup champion in the unofficial, but fiercely contested, hot brand category.

The companies reported strong sales to women during the matches and want to maintain the momentum into next summer’s Women’s World Cup.

German sportswear manufacturer Puma, which sponsored a total of 12 teams, anticipates a 40 percent boost in soccer wear sales for the first six months of this year. The firm did not provide details.

“We already knew we would be one of the winners of the World Cup,” chief executive officer Jochen Zeitz said after the finals in Berlin. “This was a tremendous, once-in-a-lifetime opportunity for us. Everyone expected us to do well because we carried out the biggest marketing campaign ever. But Italy winning the finals is just amazing for us.”

Adidas said it exceeded sales goals and reached $1.2 billion, up from $811 million at the last World Cup in 2002. Adidas, which dressed Germany and Argentina as well as France, credited its success largely to being on the company’s home turf in Germany, where Adidas controls more than 50 percent of the athletic market share.

Nike said it was in the game, too. “We didn’t have a team in the finals, but 12 of the 22 starting players in that [championship] game were wearing Nike boots,” said Dean Stoyer, Nike’s director of U.S. media relations.

Even before the World Cup matches began, Nike, which dressed the U.S. and Brazilian teams, sold more than 2.4 million national team jerseys, and reported a record year of soccer apparel and equipment revenues — $1.5 billion, up 19 percent compared with last year.

“The competition between the big three soccer brands is great because it pushes us to come up with better products,” said Adidas spokesman Evan Wiener, citing Adidas’ 51 percent market share in Germany, 46 percent in the U.S. market and 37 percent in Europe.

The companies agreed that the key is now extending the games’ impact.

“Soccer is 365 days a year,” Stoyer said. “Of course, it reaches a peak at the World Cup, when even the casual soccer fans take notice, but our goal is to take that momentum through the rest of the year.”

Adidas is pushing in the U.S. through its league sponsorships.

“The challenge is now to go beyond our core consumers and target the audience who may have just tuned into the World Cup for the first time,” Weiner said. “Even though next year [is] not an event year for soccer, we hope to carry this success forward.”

The next big world soccer event is the Women’s World Cup next summer. Nike, which is designing the U.S. women’s team’s uniforms, plans to promote the new generation of women’s soccer stars leading up to the games. Its soccer-inspired women’s apparel pieces have sold well, Stoyer said. In addition, there are many unisex team jerseys worn by women.

“That’s the beauty of soccer, it’s not gender-specific,” Stoyer said. “If you saw the crowd shots in those games, for every man there was a woman there as well, all wearing jerseys.”

Adidas said it sold more than three million jerseys, half in Germany, double the total from the last World Cup.

The sports giants are looking to expand soccer interest not only to women, but also to the U.S. overall. Although it didn’t help that the U.S. team exited the games early, the companies are encouraged.

Puma is hoping to carry the momentum to the next World Cup in 2010 in South Africa. Its charity campaign, United for Africa, aims to raise funds and awareness for the continent, through African musical and club events, charity football-related merchandise and special clothing lines, for which part of the purchase price goes to African aid organizations. The campaign also puts Puma, which sponsors 10 African teams, in an advantageous position for the Johannesburg games.

“It’s going to be another wonderful opportunity,” Zeitz said.