Apple Bottoms, the brainchild of rapper Nelly, aims to turn itself into a full-fledged lifestyle brand come fall. 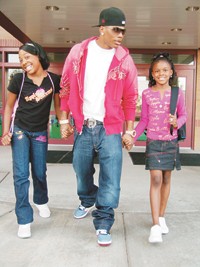 “We have the legs to expand into every category,” said Ian Kelly, chief operating officer of the company, which launched in 2002. “We just know that we have to be careful in the way we jump on it.”

For fall and holiday, Apple Bottoms will offer a collection of intimates and loungewear, produced in-house. The line consists of velour hookups with gold logo embroidery, cotton camisoles, leggings and mesh nightgowns. The intimates wholesale from $13 to $33 and the hangtags feature a green apple, rather than the red one on the firm’s sportswear.

The handbags, which range from denim and leather clutches to large logo totes, and the costume jewelry, which includes logo earrings, necklaces and chain belts, also are priced from $13 to $33 wholesale. Those products are licensed to Amiee Lynn Accessories.

All the new collections are meant to work with Apple Bottoms’ junior sportswear, which Kelly said currently generates $70 million in wholesale volume.

“We went nuts on the sportswear. It’s so much more than jeans and T-shirts now,” he said. “When I see girls shopping in the mall, they are dressed comfortably in velours, but you know they still want to look hot. That’s really how we look at it. Now, the sportswear does so damn well, it’s crazy.”

Although Nelly is based in St. Louis, he is 100 percent involved in the line, said Kelly.

“He’s more into the creative side with design and marketing,” he said. “He’s always been very fashion-forward, so he’s in his element with this. He has a sixth sense for women’s fashion and is really into quality. He just did a world tour and came back with some really great ideas.”

Kelly said that from the beginning, the plan was always to expand Apple Bottoms into a lifestyle brand. He was in talks for a footwear collection several months ago, but Kelly claimed the company, which he wouldn’t name, didn’t come up with a line worthy of the Apple Bottoms name.

“The line looked good, but it just wasn’t us. It wasn’t right for our brand,” he said. “If you have one wrong product, it can send the wrong message.”

Now the company is on the hunt for a partner to launch a fragrance, watches and footwear. Kelly said he is also interested in European distribution, for which he is in talks.

The Apple Bottoms girls’ line, which Nelly will advertise in a new campaign with his 12-year-old daughter Chanelle and nine-year-old niece Sydney, will bring in an additional $15 million in volume this year, Kelly said.

By the end of next year, Kelly predicted the wholesale volume for Apple Bottoms could reach $150 million.

“I’ve been in this business since 1997 when we launched the Vokal men’s line,” he said. “The women’s business has been so much faster, so much more lucrative. It’s really incredible.”