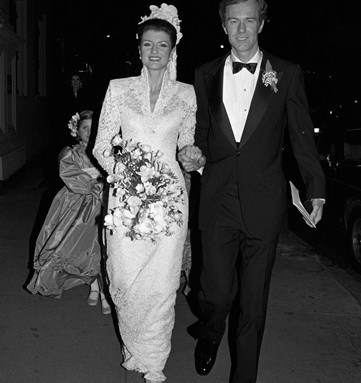 In 1986, WWD covered the “much ballyhooed marriage” between Arianna Stassinopoulos, who wore a James Galanos gown, and Michael Huffington at New York’s St. Bartholomew’s Church. “It was not what you would call an intimate occasion,” the correspondent noted, adding that limos, both at the church and the reception, were “three deep and stretched two blocks.” The ceremony featured readings from Shakespeare and the Book of Psalms; the subsequent dinner, smoked salmon, Beluga caviar, veal florentine and wedding cake. The latter “was said to cost $300 a person — $111,000 excluding music and flowers,” the paper continued.

As for the fortunate bridesmaids — the paper dubbed them the “Lavender Hill Mob” — they included Barbara Walters and Lucky Roosevelt. “They looked more embarrassed than anything,” WWD wrote, “and both Walters and Roosevelt got out of their girlish get-ups before the reception.” Also among the revelers: Mort Zuckerman (an usher), Kenneth Jay Lane, Gordon Getty (who chose the music, “although he seemed to want to be elsewhere”), Ann Getty (“who introduced the happy couple and picked up the bill”), Henry and Nancy Kissinger, Carolina Herrera, Pat Buckley, Norman Mailer, Betsy Bloomingdale and Rupert and Anna Murdoch. “No one paid much attention to Princess Michael of Kent, who usually demands her royal rights,” WWD added, “not even her good friend Arianna, who ignored HRH’s strong advice not to wear orchids in her hair. The Ploucky Princess was not pleased.”