LONDON — Eyes may be locked onto the Duchess of Sussex as she travels around Africa with husband Prince Harry and Master Archie Harrison Mountbatten-Windsor on the family’s first official overseas tour. But her wardrobe won’t be the only one under scrutiny during the 10-day trip to the continent.

Although he’s only a few months old, Archie’s outfits will also be making headlines, and undoubtedly causing brand web sites to crash as parents around the world get the first glimpse of the royal baby’s style. Why not? Prince George caused a craze for Crocs when he was younger, while Princess Charlotte and her little floral dresses gave a boost to the Spanish brand M&H, among many others. Archie, meanwhile, made his first appearance in Africa on Wednesday, wearing striped overalls from H&M.

Around the time that Archie was born, The Centre for Retail Research estimated that Meghan Markle could have the same impact on the children’s wear market as she has had on fashion in general. Over the next two years, the organization said that Markle’s baby is expected to generate roughly $1.48 billion in sales.

The royal children are fueling growth in a sector where sales have already been snowballing.

Euromonitor International, the market research provider, expects the children’s wear market globally will grow 23 percent by 2022. The company estimates the children’s wear sector — which is currently valued at $174.4 billion — will reach $196.8 billion by 2022, in terms of retail sales value.

“Parents are choosing to have children later in life when they are more financially secure,” said Hennelly. “And older parents tend to be more established in their careers, with higher salaries and more disposable income to spend on their families. In the U.K., the category also benefits from a strong culture of gifting, with grandparents, extended family, and friends all happy to splash out on clothing for little ones.”

Hennelly noted that children’s wear is now driven by fashion rather than function, as parents often tend to dress children in the brands they wear themselves.

“Trends in women’s wear and men’s wear are filtering down to children’s wear,” said Hennelly. “And in 2018 this saw the market shift toward the more premium end. Millennial parents are spending more on their children than ever before, and the proliferation of designer children’s wear launches from leading luxury houses including Gucci, Balenciaga and Chloé has prompted an increasing number of multibrand retailers to enter the category including Net-a-porter, Matchesfashion, and Mytheresa. Those already operating in the space such as Selfridges and Farfetch have been expanding their brand portfolio. Demand is consistent as kids grow out of clothes quickly, so the category presents a lucrative opportunity for brands and retailers alike,” she said.

Stella McCartney said “a huge proportion of our kids’ wear customers are parents who are already Stella McCartney customers who can’t resist adding something to their basket for their children when shopping, and I don’t think this will change. More and more we get asked about the sustainability elements within the kids’ collections and I think, and pray, this is something that will really consume the kids’ industry as customers become more and more educated and demand transparency.”

McCartney believes that teaching children about sustainability is key.

“Their generation is the one that is really going to start seeing the terrible effects happening to the planet if the industry as a whole doesn’t come together and start making big changes. Our kids’ wear has so many amazing sustainability elements, which I am so proud of. We make sure we are teaching kids about these things in a fun and interesting way that we hope resonates with them and their parents. This idea of teaching our customers is something that we will continue to focus on,” she said.

Net-a-porter teamed with Gucci on a children’s wear capsule in 2018 and launched a kids’ wear collective earlier this year. Global buying director Elizabeth von der Goltz said that the reaction to the capsule collections has been overwhelmingly positive.

“Ever since we first launched our Gucci kids’ wear capsule last July, customers have been highly engaged with all of our kids’ wear pop-ups with most styles selling out within just a matter of weeks,” said von der Goltz. “The top-five-selling products were all logo-driven, with the Gucci belt bag selling out completely in two weeks. It’s so interesting to see, as it is in equally high demand from our adult range, too.”

The site also launched a Chloé kids capsule, and von der Goltz said the strongest sellers were dresses and shoes. Bestsellers included a metallic trimmed cotton dress and embroidered ruffled dress, as well as studded sandals and a one-shoulder swimsuit. She also pointed to other top sellers such as Alanui’s cashmere jacquard cardigan and Lingua Franca’s Who Run The World cashmere sweater. She saw an “overwhelming reaction” to Golden Goose’s logo print leather and suede sneakers — which she said have been one of the biggest drivers for the kids’ wear category followed by the brand’s Superstar glittered distressed suede and metallic sneakers.

One of the main trends von der Goltz said she has noticed is mini-me dressing, driven by celebrities and Millennial parents. “We believe that when this trend is executed well, it can be both a fun and engaging way for a family to express themselves together,” said von der Goltz, adding that children’s wear overall should continue on its growth trajectory.

“We predict an increased interest from more and more Millennial parents who have a strong and growing interest in the clothing they’re buying for their children,” she said.

In May, the e-tailer also launched Jet-a-porter Kids, which includes clothing for boys and girls from designers including Zimmermann, Doen, Marysia, Pippa Holt, and Ancient Greek Sandals.

Mytheresa, which launched a dedicated kids’ wear section earlier this year, also believes the sector is having a growth spurt.

Michael Kliger, Mytheresa president, said the launch “achieved immediate traction with our core customers. Over 50 percent of the business is done outside Europe, and the average order value is only 15 percent lower than women’s wear. Return rates are far lower and the top customer share is above the women’s wear average. These are excellent initial key performance indicators.“

Tiffany Hsu, Mytheresa fashion buying director, said this is a category she doesn’t see slowing down anytime soon. “We will continue to grow our assortment, as we know what our customers are primarily drawn to, and now that many fashion-conscious Millennials are becoming parents, we will continue to see some very good opportunities for the years to come.”

Hsu said that while parents love to buy a “full-look” for their kids, they’re more inclined to invest in matching, coordinated pieces than in small accessories. She added that the site’s focus remains on “the power designers and a few independent labels to have a great selection.” 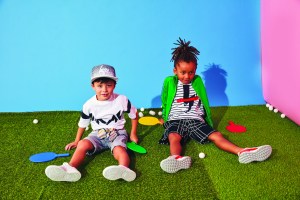 Jenny Slungaard of AlexandAlexa believes the dominance of sportswear in the adult sector has filtered down to kids’ wear through mini-me dressing and technical sports dressing, a key category for the retailer. “We have seen huge growth from our sports category, which includes brands such as Nike, Adidas, Reebok, Golden Goose, and Converse.”

She added that ethical and sustainable brands are also a growing area and the retailer has been championing indie brands such as Tao & Friends, Mini Rodini, and Sproet & Sprout.

Maisonette.com cofounder and chief executive officer Sylvana Ward Durrett said the retailer is on track to more than double its revenue in 2019. “We plan to continue to focus on transforming the way consumers shop for their children by aggregating the best children’s brands and boutiques from around the world.”

The site has found success with Mommy and Me-focused collaborations, including Cesta Collective, Marysia Swim and Mott50, among others. Other key brands include Stella Cove, Mott50, Marysia Swim, Minnow and Pink Chicken, according to Ward Durrett and the company’s cofounder and president Luisana Mendoza de Roccia.

“Children’s wear is such an exciting category,” said Durrett. “There are so many independent, contemporary brands arriving in the market every day. We created Maisonette right at the beginning of the massive movement, as traditionally the category consisted only of legacy brands that didn’t provide much differentiation in the space. With the increased assortment of children’s’ brands and influence of social media, this market is growing faster than any other category.”

The company launched an in-house children’s clothing collection, Maisonette Essentials, in May. Karolina Petersson, formerly of Celine, heads the in-house design team and the lineup includes basics such as dresses, trousers, and tops with price points under $50.

As reported, Rent-the-Runway has also launched a line for kids while U.K.-based Childrensalon.com is tailoring its web site to the American market.

Master Archie, and his mother Meghan, won’t be wanting for choice.