Will Arielle Charnas’ Something Navy Be a ‘Catalyst for Change?’

After collaborations with Nordstrom, Arielle Charnas branches out on her own with Something Navy, a lifestyle brand rooted in fashion and apparel.

Courtesy of Something Navy

Arielle Charnas is bringing her much-talked-about brand to market. Will it find its footing in a time of great uncertainty?

In March, when the world began to buckle under the threat of the coronavirus pandemic, Charnas shared a series of Instagrams showing her taking a COVID-19 test. She had secured the test through personal connections at a time when New York was limiting them to those exhibiting specific baseline symptoms Charnas did not seem to meet.

Brandon, Charnas’ husband, filmed his influencer wife as a nurse reached through the car window to swab the inside of Charnas’ nose. The influencer later revealed that her test had come back positive: She had contracted the virus that has claimed more than 550,000 people worldwide.

Shirking shelter-in-place mandates for those who had the virus, Charnas left New York City to self-isolate among the Hamptons elite. If her prior actions hadn’t angered social media users — they did — it was Charnas’ relocation that truly set them off. They dubbed her the “Covidiot.”

“I’ve faced criticism before — it’s what I do. This felt very different,” Charnas told WWD on a call from her Hamptons quarantine house. “It’s never my intention to hurt or offend anyone. I’m human and I make mistakes. I learn my lessons just like anyone else, and I’m trying to do better things with my platform — educate people, support businesses. It’s a learning process and I’m doing my best. I know my community and my followers appreciate that.” 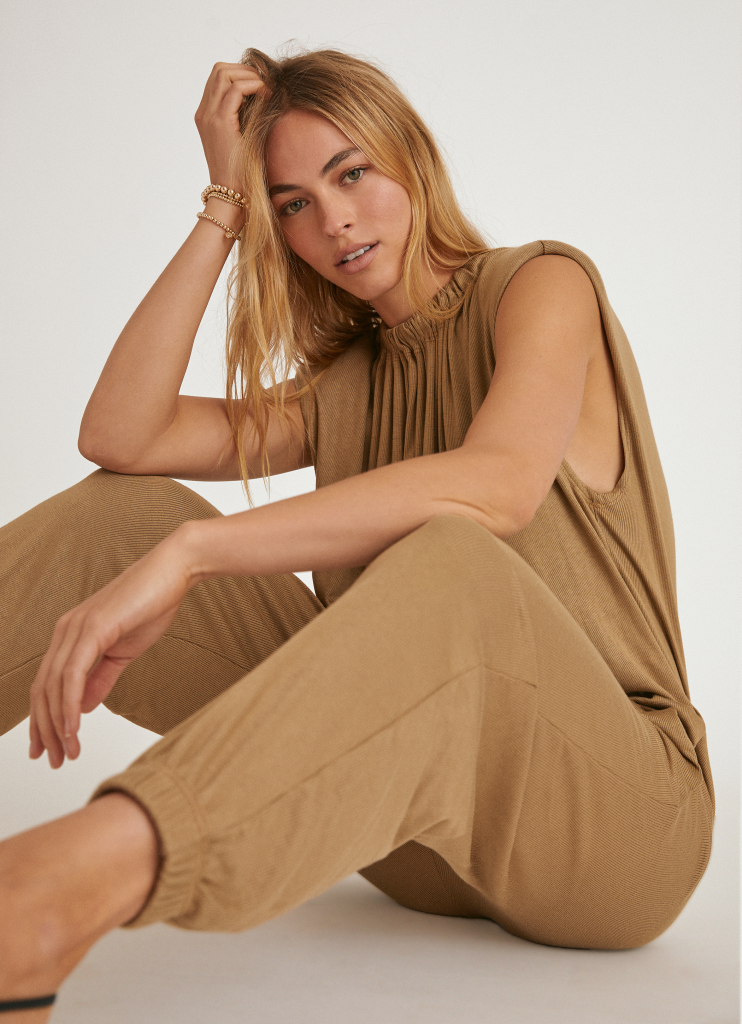 The first pandemic in modern history has caused a shift in the way many social media users view influencers. The virus has sparked record unemployment levels and disproportionately affected Black, Native American and Latino people. Mainstream influencers — nearly all of whom are thin and white — have struggled as their luxury fashion, beauty and travel posts proved hollow in comparison to the evolving health crisis and more recently, the racial one.

Charnas has drawn ire before for a lack of body-type inclusivity and racial diversity in her designs and campaigns for Nordstrom. She first worked with the retailer on a Treasure & Bond collaboration in 2017 that sold more than $1 million in a day. The following year, Charnas and Nordstrom released a Something Navy line that sold more than $4.4 million in 24 hours.

Nordstrom previously praised Charnas for her successful collaborations, but when the influencer received backlash for her coronavirus gaffe, the retailer distanced itself. When reached, a Nordstrom spokesperson said, “We had a successful partnership that ended in 2019. We don’t currently have future collaborations planned.”

For the past year, Charnas has been working on a Something Navy clothing brand of her own. The first collection will launch on July 13 with 11 styles — blouses, dresses, denim, jumpsuits and a sweatsuit in various colors and patterns — priced from $65 to $250. Multiple collections will drop throughout the year. All will be available on somethingnavy.com and eventually at Something Navy’s brick-and-mortar store in the West Village, which has not yet opened.

Fleiss, a consumer of Charnas’ Nordstrom collaborations, said she was compelled to invest in Something Navy because of its business model and the involvement of Matt Scanlan, the chief executive officer of Thakoon and cofounder of Naadam, the cashmere company that purchases directly from Mongolian goat herders in an effort toward supply chain sustainability. Scanlan is Something Navy’s interim ceo.

“We’re at this interesting moment in terms of how direct to consumer brands market, especially since COVID-19,” Fleiss told WWD. “Having an Instagram influencer behind [the brand] is super powerful. That [reduces] the cost of customer acquisition.

“From cofounding Rent the Runway, I have a real appreciation for how fashion is an important emotional piece of a woman’s life and how it can be transformative and connect people,” Fleiss continued. “Arielle’s brand is another manifestation of that.”

The Something Navy collection was slated to launch in March, but Charnas pushed back the date in light of the coronavirus and George Floyd protests. She wanted to take extra time to rethink the debut campaign and web site, and asserts that she and her brand “stand in solidarity” with the Black Lives Matter movement.

“We wanted to reflect and make sure, as a brand and a large platform with a social responsibility, that we’re taking action and prioritizing diversity and inclusivity across the board,” Charnas said. “We’re prepared now. We’re excited to grow and learn and make changes internally.”

Sustainability and transparency are a part of the Something Navy brand, as they are at the heart of Naadam, said Scanlan. Something Navy aims to work with ethical manufacturers that pay fair wages and minimize carbon emissions.

Led by Sharon Chuter’s Pull Up for Change campaign, consumers are asking America’s leading corporations to make transparent the diversity of their employee makeup. Influencers, too, are speaking out about racism in their industry, sharing their experiences of pay disparity, tokenism and bias with a handful of social media accounts in hopes of sparking change.

“I think the most valuable brands are built when there’s full transparency from supply chain through to the customer,” Scanlan said. “The idea was really simple: let’s take the back-end and match it up with [Charnas’] high-powered, front-end engine and make it as transparent and fully integrated as humanly possible. We’re shocked at the talent we’ve been able to pull together. Everything’s in-house, from digital marketing to content to development to merchandising and design.”

Scanlan said he “always planned” to build Something Navy to be more profitable than Naadam.

“We’re looking at 35 to 40 percent EBITDA on a business like this, [… ] mostly driven by the fact that there really are no marketing costs,” Scanlan said. “Additionally, I like building businesses with multiple distribution strategies.”

Something Navy has plans to work with a retailer and grow its own “integrated marketplace.”

“We have our media business, which is our content and media on the site and on social media, and we have our marketplace, which connects both of them,” Scanlan said. “We are building an integrated marketplace where other brands can sell their products through the Something Navy experience and we can merchandise the lifestyle for people before we’re actually able to make those products. I think it’s a great opportunity for our partners who want to understand how the economics work, how our engagement looks, what our conversion looks like.”

Scanlan first met Charnas when Naadam hired her to promote some of its pieces and one of its store locations. Scanlan had heard that Charnas garnered high conversion rates via her social media posts. Still, he was surprised when their partnership outperformed expectations.

“We almost 10-timed our money in something like 48 hours,” Scanlan said. “I’ve been doing this a while and I didn’t understand how this existed. From my perspective, the back-end — financial operations, supply chain, fulfillment, the teams around that, the centralized function of it — is not proprietary. It takes time, but it’s re-creatable. The thing that has pure IC and is special is the Something Navy brand.”

“We were having a real conversation just yesterday about how we’re kind of ashamed [of the team’s lack of racial diversity],” Scanlan said. “It’s always been a conversation, but we should have pushed it further. We’re dedicated to not only promoting internally, but also finding ways to hire people of color.”

Something Navy’s debut and future designs incorporate “hundreds of thousands” of pieces of feedback from Charnas’ followers, Scanlan said. The company hired an in-house lead designer named Junko Hirata, who has prior experience at Tanya Taylor and Ulla Johnson. Sizes range from 0 to 12.

As is the case at most companies, COVID-19 has forced Something Navy’s team to work remotely via Zoom, sharing sketches, making edits and trying on samples all via video. With regards to the supply chain, the team has had to double-source — and in some cases, triple-source — products as a backup. 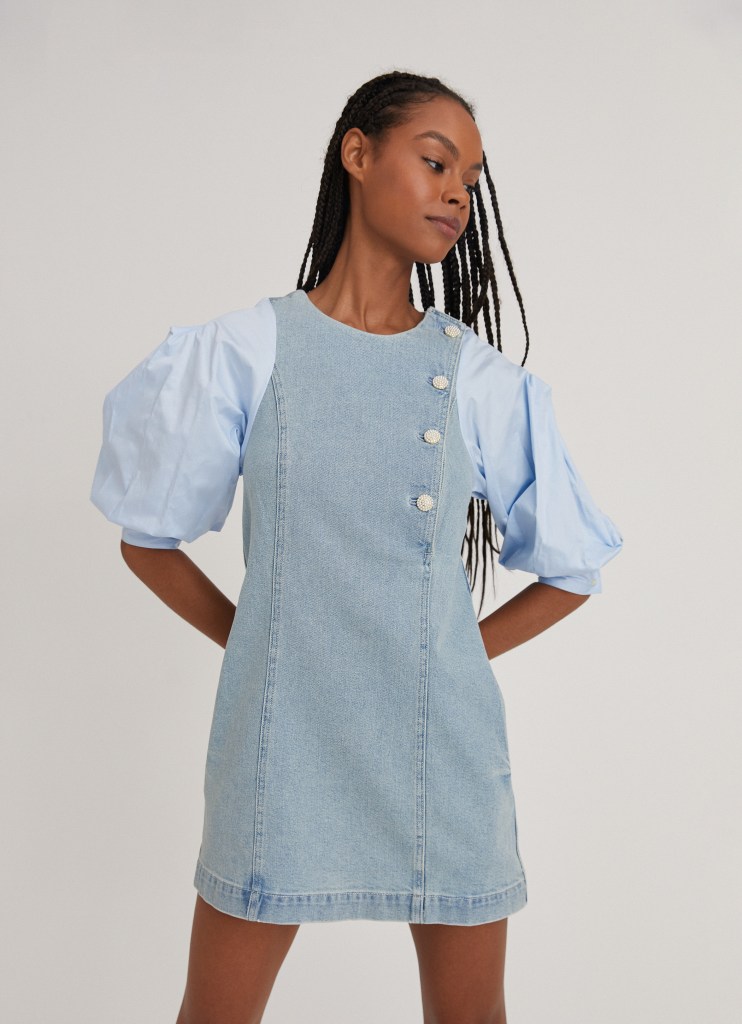 “Collaborations I’ve done in the past weren’t fully in my control. I had to cater to that brand or retailer,” Charnas said.  Courtesy of Something Navy

“Typically, you want to develop with the manufacturer you’re going to produce with because it’s good business for them and it’s equitable to do business like that,” Scanlan said. “Having said that, I think all manufacturers have realized they have to be accommodating to a zig-zag manufacturing and development process [due to COVID-19].”

Charnas’ Nordstrom collaborations prompted consumer concern over a lack of product quality. A few Nordstrom sales associates told WWD that the products were sometimes ordered online and returned in stores over similar concerns. Something Navy products are currently on sale at Nordstrom Rack, with discounts as high as 76 percent off.

Charnas said that developing a stand-alone brand afforded her greater authority over all processes, including product creation.

“Collaborations I’ve done in the past weren’t fully in my control. I had to cater to that brand or retailer,” Charnas said. “This is very much about the customer, through and through. I’m allowed to do what I want because it’s my brand and my brand only. I’m allowed to share things on Instagram about the process, the fabrics and the colors before we launch. A lot of times in the past I wasn’t able to do that.”

Scanlan said he believes the Something Navy brand will be “a catalyst for change in the industry.” That change seems to refer to more representation of women, specifically influencer women who have long felt that — regardless of their luxury partnerships, front row seats and sponsored posts — they remain on the outskirts of the fashion industry.

The Something Navy global vision includes lifestyle, cosmetics and home goods, with its core in fashion and apparel.

“We feel we have the opportunity to expand vertically and horizontally and eventually build out a global lifestyle business to rival the ones that have been built for the past couple generations,” Scanlan said. “That’s how I’ve always viewed it: a massive, industry-shifting opportunity.”

Already, the industry is shifting. Fashion is being asked to answer for its long-held exclusionary practices, which tend to disproportionately impact people of color.

The recent movement in the influencer industry, which is little more than a decade old, is testament to how new businesses and industries planted not with the seed of inclusivity inevitably exclude Black and brown people. All of this with the backdrop of the COVID-19 pandemic, which has already impacted influencers’ bottom lines and changed consumer shopping behaviors.

Charnas said she is committed to racial diversity and holding herself and her team accountable. Scanlan said it is “critical that changes happen” across all industries.

“I want to be mindful that changes happen in the long term and that they’re not reactionary or even performative,” Scanlan said. “I believe we’re doing that work and taking those steps and we’re gonna keep ourselves accountable. And we want people to keep us accountable because we’re gonna try to do the same to others.

“I think this is a critical moment for our culture, and businesses have a responsibility to help lead some of that foundational change,” he continued. “I built my career off of human rights. That’s what Naadam was built on: helping other people, doing the right thing. I could not let this moment go by without using the opportunity to be part of that conversation and actually help make a change.”