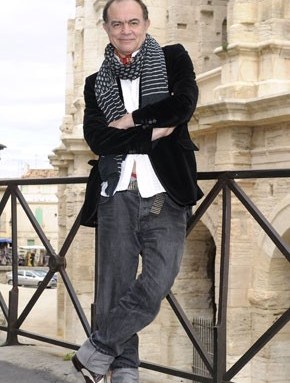 Crack open the lunch menu at the Grand Hôtel Nord-Pinus in Arles and it’s lined with the florid handwriting of Christian Lacroix, who penned his reminiscences of the famous inn. Poke through the costume section of the romantic Museon Arlaten and one realizes the couturier’s taste for colorful prints and ribbons runs deep—back to the 17th century at least, when powerful Arlesian dress traditions were set.

This charming southern French town, on the western edge of Provence, is chockablock with reminders of one of its most famous sons, perhaps never more so than this summer, when the Musée Réattu hosts a sprawling and autobiographical Lacroix exhibition May 17 to October 31.

What’s more, the famous international photography festival, Les Rencontres d’Arles, July 8 to September 14, will be curated this year by Lacroix, who believes that behind every good dress lies a powerful image or two. “I really feel like I belong to the town again,” the designer muses. “The city has changed a lot. It has great energy.”

Lacroix has been shuttling between Paris and Arles on the high-speed train a lot these days (although he did not design the interiors for this particular route) to oversee the mounting of both exhibits. In any case, he and his wife, Françoise, devote as much time as possible each summer to Arles, attending bullfights and working on their new residence on the Rue Diderot. Lacroix is frank about the fact that his beloved hometown has weathered some rough patches, with the disappearance of the railway industry, which itself obliterated the river trade, a particular blow. “When I was a child, 50 percent of the people in Arles were working for the railways,” he recalls.

Today, those abandoned ateliers are now vast exhibition spaces used for the photography festival. Lacroix is excited about the prospect of a new Frank Gehry complex being commissioned, partly for Maja Hoffmann’s private art foundation, which will add to the town’s cultural riches.

Growing up in Arles, Lacroix was a fixture at the local museums, particularly the Réattu, where he discovered the photographer Lucien Clergue and the celebrated 18th-century painter Antoine Raspal, whose works set him dreaming. “It was so moving and inspirational to have all these pictures,” he says. “I love those canvases.”

In the Lacroix show, one Raspal work depicting seamstresses will be placed next to the dresses it inspired, along with others influenced by artists including Pablo Picasso, creating a dialogue between masterpieces from the museum and a modern-day Paris fashion hero.

In Arles and its environs are all the rich inspirations that have fed Lacroix’s collections: the bullfighters, gypsies and churches. And there are very personal remembrances, too, including narrow streets radiating from the town’s Roman Arena that Lacroix favored as a youngster for romantic dalliances.

Lacroix recommends that visitors explore the region surrounding Arles, from the more classic and touristy Provençal parts north down toward the vast, marshy spaces of the Camargue—filled with cowboys, bulls and pink flamingos—and the Mediterranean Sea. He suggests Pont de Crau for antiques and Maussane les Alpilles for a taste of an authentic village.

Indeed, one of his favorite restaurants, La Chassagnette, is about a 20-minute taxi ride from central Arles in the middle of a nature reserve, where chef Armand Arnal nips out to the garden to fetch herbs and flowers to decorate his delectable organic cuisine.

The designer is most proud of Arles’ cultural attractions. It’s home of the publishing house Actes Sud and the classical music specialist Harmonia Mundi. The Nord-Pinus remains a favorite hangout for artsy, trendy types, thanks partly to photographer Peter Lindbergh, who brought the likes of Linda Evangelista and Naomi Campbell down for fashion shoots. “He really gave another dimension to the city,” says Lacroix, who could say the same about himself.

This article was originally published in WWDSCOOP, a supplemental publication of WWD available to subscribers.