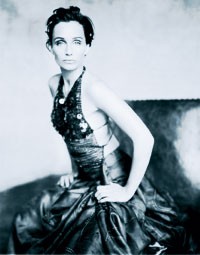 Nothing describes the career of Giorgio Armani like continuity, control and moderation, and the same can be said of his approach to marketing over the years.

“My philosophy of advertising is really quite simple: Always be consistent, be true to your values, be elegant and positive with your imagery — and never forget that the product needs to be seen!” the designer averred.

Accordingly, Armani believes in controlling the advertising from within the company because outside creative directors “cannot be expected to truly understand the sensibility, atmosphere and vision that we are trying to convey.”

Stefania Saviolo, co-director of an MBA fashion management program at Bocconi University in Milan, said Armani’s “communication is in line with his style — clear and simple — and there is always a connection between his communication, his products and his points of sale.”

Lamberto Cantoni, professor of history of contemporary fashion and communication at Polimoda, the international fashion, design and marketing institute in Florence, said Armani has “an exceptional sensitivity for tiny variations. The pleasure of looking at the photos is almost chosen by the spectator rather than forced upon by the designer. He is a master at setting the distance between the images and the spectator.”

Controlled though he may be, Armani readily takes chances and sets off in new directions when he thinks the times call for it. After all, he is the only designer who used two owls as models (for his Emporio Armani fall 2003 eyewear collection).

Still, in an era when shocking or provocative images are often used — some might say overused — in fashion advertising, Armani has stayed true to his own philosophy.

“The idea of provoking controversy through advertising makes no sense to me,” said the designer. “If that is so necessary, there must be a deficiency elsewhere. Given that advertising is somewhat intrusive, whether it is in a magazine, on television or outdoors, I feel strongly that it should be uplifiting and provide a positive experience. It should enhance rather than detract.”

Cantoni said that at a time when many went overboard to seduce and be risqué, as in the Eighties with Helmut Newton, or with some of Calvin Klein’s campaigns, for example, “Armani was audacious precisely because he went against stream.”

Similarly, Armani was firm in rejecting the frenzy for using the hot model of the moment. The designer has always  employed relatively unknown models for his campaigns, refusing to let the clothes be upstaged by famous faces. “The product must be allowed to shine in the advertising,” said Armani. “Using top models is not a necessary condition to achieve this.  In fact, the result can easily be the reverse as the attention is directed to the model rather than the product.”

Cantoni said Armani knows  that communication is addictive, and that top models are a concentration of images that can artificially enhance product performance or perception — not unlike doping versus doing sports naturally. “After you’ve employed top models you can’t give up on them,” he said.

Luxury goods analyst Carlo Pambianco said Armani’s communication is “entirely focused on the product, which is in line with his image and identity.”

While usually faithful to this mantra, Armani added a new star-studded spin to his campaigns three years ago, when he asked actors Kristin Scott Thomas and Olivier Martinez to appear in ads for his signature line, and his longtime friend and supporter Michelle Pfeiffer for his current spring campaign.

Armani points out, however, that “the Michelle Pfeiffer and Kristin Scott Thomas images were not the main seasonal campaigns, but rather special portfolios celebrating these two iconic actresses.”

As for Emporio Armani, the designer said he has worked with young emerging actors who “actually represent the spirit of Emporio.”

Last year, young actress Eva Green was tapped for the Emporio Armani fall 2004 campaign with the other two main actors in the cast of Bernardo Bertolucci’s “The Dreamers,” Michael Pitt and Louis Garrell. Green is also featured in the Emporio spring 2005 campaign.

In the end, however, who better than Armani to embody his style? The designer himself appeared in the campaign that launched the Emporio Watch collection in 1998 and in the ads that marked the first eyewear collection to be produced under license to Safilo two years ago. In January, a photo of the designer posing with the basketball team he sponsors, Armani Jeans Milano, was set up on the billboard he owns in the city’s Brera district. As Saviolo noted, Armani is one of the few designers who firmly believe in the use of billboards. “While billboards are usually associated with mass market, Armani has succeeded in overturning this notion, and Milan’s Brera billboard has become a definite point of reference,” said Saviolo.

In 2000, Armani did take one significant step. After years of black-and-white photos by the likes of Peter Lindbergh, Albert Watson, Mario Testino and Paolo Roversi, who all mastered the use of ombré gray and sepia for the designer, he embraced the use of color. This new course also marked the 25th anniversary of his company. At the time, Armani said he was “ready for a change,” and for images that “reflected a modern way of being.”

Because of her work with color, Armani asked Ellen von Unwerth to capture the vibrant reds, emerald greens and midnight blues of his beaded dresses and geometric-print gowns of his spring 2000 collection, shot against Palm Springs’ rocky, sun-drenched backdrop. Rarely has Armani opted for studio shots. According to Saviolo, Armani always strives to “create an atmosphere, set his clothes in a city or in a context where things move around the clothes.”

Cantoni said Armani’s use of black and white “was nothing better in such a noisy and obscene society as ours and it was a way to distract from the bombardment of images in the world.” Cantoni noted that Armani was “misunderstood” for a long time, as the designer “is extremely sensitive to color and in his quest for realism, he’s never given up on color; he’s mastered it, attempting to add color to black-and-white photos, renouncing all excesses.”

So does this master of imagery have a favorite campaign?

“Over the years there have been many collaborations with photographers that I have enjoyed,” said Armani. “Paolo Roversi, Albert Watson, Peter Lindbergh, Ellen von Unwerth and more recently Mert and Marcus. And many campaigns that have been particularly memorable. I actually think the current Giorgio Armani campaign, which is my first project with Steven Meisel, is especially strong.”