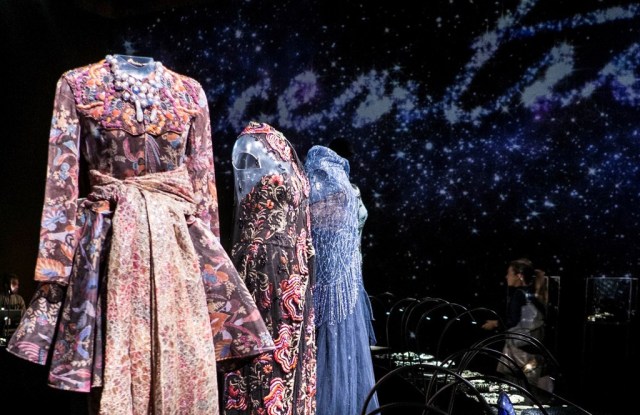 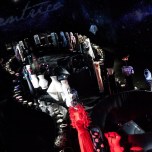 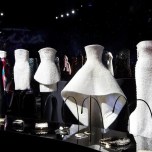 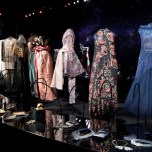 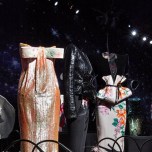 MILAN — “Eccentric” is not a term instantly associated with Giorgio Armani, but the designer believes it’s time to change that and has arranged an exhibition to show just how whimsical his designs have been over the years.

The exhibit, set up at Armani’s Tadao Ando-designed headquarters in Milan and titled “Eccentrico,” was unveiled after the signature brand’s spring show Sunday evening.

“I’m thinking of all the work behind these designs and how, at times, there’s been some inattention…how the work was not underscored,” said Armani, during a preview tour of the exhibit, pointing to the 40 looks, and a selection of accessories, from 1985 onward that he elected to display.

Asked if the selection process was difficult given his body of work, the designer said with a confident smile that it all “came naturally. When it’s a matter of fashion, almost nothing is difficult.”

Arranged thematically and not chronologically, the clothes, shown on mannequins, and the accessories, placed on a black oval structure, glitter along with images of a starlit sky projected on the ceiling and the walls of the space.

“I was seeking to convey a dreamy, fantastical dimension through the constellations and these looks,” said Armani.

The looks — which included a silk taffeta jacket with embroidered pineapples inspired by a Gloria Vanderbilt dress from the spring 1989 collection; a gray silk frock with sculptured sleeves from 2008; a gypsy dress embroidered on tulle and covered in sequins from the fall 2008 collection, and the famed getup designed for Lady Gaga in laminated metallic pieces stitched together — were flanked by gowns inspired by Wassily Kandinsky or the Far East.

“Fashion should propose something that is intriguing, that you don’t think you need, but that you end up wanting,” mused Armani. While admitting to a “formally purist and rigorous” streak, he said he wanted to show his more “extravagant vision and sophisticated eccentricity” with the exhibit.

Accessories also showed the designer’s experiments with surrealism, with hand-shaped embellishments. A stunning hat made with a weave of fans again referenced Armani’s fascination with Japan.