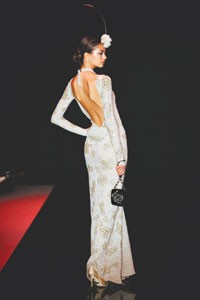 MILAN — Giorgio Armani SpA on Tuesday reported double-digit profit growth in the first half and wholesale orders for spring 2006 are already up by at least 5 percent.

Dollar figures have been converted from the euro at average exchange rates for the period to which they refer.

“I am particularly pleased with the success we are having in Greater China … and with the dynamic growth we are now seeing in both our accessories and home furnishings businesses, both of which have been priorities in our program of investments over the last five years,” chairman Giorgio Armani said in a release.

John Hooks, the company’s commercial and marketing director and president of Giorgio Armani Japan, said he was optimistic about the second half of the year and said sales continue to grow “more or less at the same rate as in the first half.”

Hooks said sales were softer in the United States and Asia in the first half of September, probably due to the hurricanes in the U.S. and very hot weather in Japan. But sales recuperated in the latter half of the month, he said.

An Armani spokesman said spring-summer 2006 wholesale orders for Giorgio Armani are up 5 percent, while those of Emporio are up 12 percent.

As for the other lines, Armani Collezioni and Armani Jeans, orders are up by 5 and 4 four percent, respectively. Accessories orders for both Giorgio Armani and Emporio Armani are advancing 10 percent. Orders at Armani Casa are up 22 percent.

The company also is touting a well-received Armani Privé couture collection, launched in Paris last January. The spokesman said two-thirds of the 34 pieces that made up the first Privé collection were sold. For the second Privé collection, shown in July, there were 60 items including daywear and cocktail dresses and the company sold about 90 percent of the pieces.

Returning to the first-half numbers, the company said sales through its fully-owned retail channel were up 13 percent at constant exchange rates. Armani opened 26 stores in the six-month period, including boutiques in China, Japan, the U.S., Russia, Mexico and Brazil. An Armani spokesman said like-for-like sales in company-owned stores climbed 10 percent in the first half.

Retail openings in China helped propel a 38 percent spike in that country, although Hooks noted that older stores in Hong Kong and Shanghai are also performing well. Armani plans to have 21 stores in greater China by the end of 2005 and 30 stores by the end of 2007. Hooks was similarly bullish on Japan, where first-half retail sales grew 13 percent.

“Business is very good in general … Japan is mainly like-for-like sales growth,” he said. Armani has just signed a lease for a 12-story building in Tokyo’s Ginza district next door to a Hermès. Slated to open in fall 2007, the complex will house a flagship, showrooms and the new corporate offices for Giorgio Armani Japan.

“We’re very optimistic about Japan. Even the department stores which have been losing business for years are finally seeing an upswing in business,” Hooks said.

In Europe, where Armani saw its first-half retail sales climb 9 percent, Hooks said stores are exceeding expectations in countries such as Italy, the United Kingdom and “even in difficult markets like Germany.”

As for the U.S., retail sales grew 4 percent there in the first six months of the year. Hooks noted that the weak dollar-to-euro exchange rate penalized business in the U.S. Looking forward, he said the recent hurricanes are “just one more bit of negative news” for the U.S. economy.

Still, Hooks said Armani’s push into China and other emerging markets like Eastern Europe and Russia will help insulate the company from the fluctuations of any particular market.

Meanwhile, Armani recently published its 2004 annual report. The volume contains few surprises as the company released most of the figures in May. As reported, net profit dropped 5.5 percent to 126.2 million euros, or $156.5 million, while sales rose 3.5 percent to 1.3 billion euros, or $1.61 billion. The company said profits suffered in part due to higher advertising expenditures.

Still, the report contains some additional details about the business, including the company’s operating profit. Earnings before interest and taxes in 2004 dropped 10.1 percent to 162.7 million euros, or $201.8 million. The report also quantified the size of Giorgio Armani’s dividend: 55 million euros, or $68.2 million.

Additionally, the document revealed the company had to write down the value of its U.S. subsidiary Giorgio Armani Corp. by 15.7 million euros, or $19.5 million. A spokesman said the dollar’s deterioration versus the euro forced the revaluation.

The report also discloses that Armani sold 51 percent of ManzoniUno Srl, the company that owns the flagship on Milan’s via Manzoni, to another firm controlled by the designer for 22.8 million euros, or $28.3 million. The upper floors of the Via Manzoni building will house a hotel, set to open in early 2008. A Dubai hotel will open simultaneously.

In the first-half statement, the designer referenced the hotel project, along with the new Tokyo lease and the recent acquisition of a second building on Milan’s Via Bergognone as significant developments for the company, which this year celebrates its 30th anniversary.

“In short, the various strategic initiatives that we have implemented in the last several years to develop Giorgio Armani into a fully diversified worldwide fashion and luxury brand are now all moving ahead strongly,” Armani said.