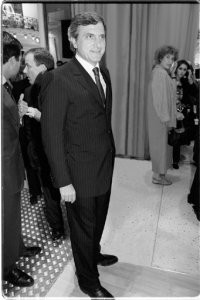 That’s when the Christian Dior fashion house, the luxury titan’s most beloved property, is projected to reach $1 billion in sales, which would give Arnault fresh boasting rights over competitors attempting rejuvenation miracles.

“Parfums Dior already does in excess of $1 billion. Recent growth trends have also set the fashion company on [track for] the $1 billion target,” Arnault told WWD. “The company is bound to double its size in the near future. It is simply a realistic potential for Dior. The first two months of 2003 were very good, driven by consistently strong consumer demand.”

What’s more, Arnault stressed that size does matter — especially in terms of profitability.

“At $1 billion, the Dior [fashion house] should be extremely profitable. But Dior is already profitable, and through the major turnaround, it never lost money.”

Today, Christian Dior SA is expected to announce operating profits at the Dior fashion house of $36 million, up from a loss of $6 million a year ago. (Dollar figures are converted from euros at current exchange rates.) In tandem, LVMH Moët Hennessy Louis Vuitton is set to announce its 2002 earnings at a news conference this morning. As reported, sales at Christian Dior Couture, which includes the couture, ready-to-wear and accessories business, rocketed 41 percent to $535.6 million last year.

The notoriously bullish Arnault said he remains optimistic looking ahead, despite the specter of a war in Iraq and other troubling economic indicators.

“In wake of the 2002 results, Dior proves its fundamentals are on the right track despite the world economy,” he said. “In case the geopolitical climate worsens, contingency plans are ready for implementation, even though we will not question major developments, such as flagship openings and creative investments.”

And how. Dior plans to open at least 20 more stores this year, including a $30 million flagship in Tokyo in December.

“The momentum is still here, so we are not slowing down,” stressed Dior president Sidney Toledano. “In 2003, I expect a strong double-digit growth rate.” He said that the sole concession to tough times is that the company carefully monitored stock levels last year and plans to continue doing so, especially if war breaks out in Iraq. At present, no cuts are planned for its advertising and marketing budgets, he added.

In a wide-ranging interview at Dior headquarters here, Toledano elaborated on the year ahead and discussed the key accomplishments since the 1997 arrival of John Galliano thrust Dior into the limelight.

To be sure, Galliano has delivered theater, controversy and headlines, but the sales are testimony to the fact that his high-voltage fashion vision has been translated into salable products — and those with high margins. A new handbag, dubbed “The Latest Blonde,” is expected to be unveiled this afternoon at the Dior rtw show that’s helping kick off Paris Fashion Week.

“John Galliano will certainly figure as one of the greatest designers of his time,” Arnault asserted. “Through his work at Dior, he has been able to bring modernity to the ultimate luxury house and to envision the fashion of the third millennium.”

While scores of fashion houses have ambitions to build significant accessories businesses, Dior has made considerable progress thanks to Galliano designs like the “Saddle.” Toledano said handbags, small leather goods and footwear now account for more than half of Dior’s sales. Women’s rtw adds up to about 30 percent, men’s wear “less than 10 percent,” with the balance being fine jewelry, scarves, costume jewelry and royalties, the latter accounting for “less than 5 percent” of revenues. “It used to be 80 percent under the old model,” Toledano noted. At present, licensed products at Dior are limited to such categories as eyewear, watches, tableware and children’s wear.

“The growth in all categories has been extremely strong,” Toledano said. For example, footwear sales tripled in 2002 “and we’re still not in all boutiques with the product.”

In recent years, Dior has introduced several hit handbags, including the Lady Dior, Saddle, Street Chic and Admit It ranges, Toledano said. And over the weekend, a total of three new ranges will be on display at Dior headquarters here.

“We have permanent lines, which is important in the handbag business,” Toledano said. “If [people] buy luxury goods, they want a sense that it will last for several seasons. The Kelly bag was not a classic shape in handbags when it came on the market, but the way Hermès managed it, it became a classic.”

Among the 20-plus boutiques slated for this year are a Paris flagship on Rue Royale and new units in Hong Kong; Moscow; Saint-Tropez; Palm Beach, Fla.; Manhasset, N.Y., and at the Bellagio in Las Vegas. Expansions are planned for London and the Forum Shops at Caesars Palace location in Las Vegas.

Sales in Dior boutiques were up 49 percent last year at constant exchange rates. Asked to account for the increase, Toledano said: “The mood is young in the boutique. [Customers] sense the mood of a rejuvenated brand and this is what the customer is looking for. The mood is not formal, old or fossilized. The mood at Dior is one of energy and optimism. It’s a positive brand. Others think that to be luxurious you have to be sad, serious and black.”

In one of many not-so-veiled references to what his rivals are up to at Gucci Group, he was no doubt referring to boutique concepts for Gucci, YSL and Bottega Veneta.

“You don’t have to confuse home interior design and store design,” Toledano continued. “Dark walls and low light might be nice for an apartment, but maybe not a store. A store has to give energy.”

Many industry watchers like to compare and contrast Dior’s progress against Yves Saint Laurent Rive Gauche. Arnault and rival Domenico De Sole, chief executive of Gucci Group, last year waged a memorable war of words in the press, with each declaring they would be the first to create a second major fashion brand beyond their core fashion franchises and cash cows, Louis Vuitton and Gucci, respectively.

Asked which brand is doing better, Dior or YSL, Arnault would only offer: “I let you and the consumers be the judge.”

Toledano spoke freely about some of his luxury peers, mentioning Dolce & Gabbana and Burberry as companies he thinks are doing well.

“Frankly, I look more to Chanel than YSL,” he said. “This makes a difference for us because [YSL] doesn’t make couture anymore and this you see in the products. It’s a feeling, it’s a know-how. I always insist the couture is not only to provide dresses to couture customers. Our designer, John Galliano, what he does in haute couture has an impact on all the other products. I see that at Chanel. I don’t see it at YSL.”

Toledano allowed that it takes a good five to six years to rejuvenate a brand. “You don’t do it in three years,” he said. “You need a permanent creative director and a permanent president and manager, plus you need the full backing, not only financial, but the vision, of the shareholder.”

Dior has faced criticism for promoting an eclectic rather than unified brand image — sexy, outrageous and extravagant for women’s, austere and strict for men’s. Detractors say it’s a recipe for confusion. But Toledano insisted customers are tickled, rather than confounded.

“The fact that we have three designers for one brand gives us an edge in this period instead of the other formula: one designer for several brands,” Toledano said, in yet another allusion to Gucci Group, where Tom Ford designs for Gucci and Yves Saint Laurent Rive Gauche. “The universe of Dior is not monolithic. When [customers] go from one room to another in a Dior boutique, they look for something different. We see young couples going from the women’s area to men’s wear and having a different experience. It’s a source of diversity today and everyone’s happy about it.”

Arnault went further, saying Dior’s progress is the result of a “perfect match” between the brand and its three designers.

“Had I hired Marc Jacobs for Dior and John Galliano for Louis Vuitton, it would not have worked as well for both brands, even though both designers are geniuses of their own,” he said. “Similarly, Victoire de Castellane for fine jewelry and Hedi Slimane for men fully embody Dior today. I think a real match between a brand with such a history as Dior and a designer like John Galliano is a unique combination. It is working so well because the customer feels it is a natural association. Dior was in the blood of John Galliano long before he was working at Dior. I think Victoire and Hedi also have Dior somewhere in their DNA.”

Arnault said he decided back in 1984 that the Dior name could allow several designers to coexist. “The key aspect is that all designers work with values of Monsieur Dior and therefore maintain the brand coherence,” he said. “But I must say that Christian Dior is probably the only brand in the world that is powerful enough do that.”

Now that Dior is on the right track, the industry is questioning where Arnault might next funnel his attention and resources. Fendi and Donna Karan have been cited as priorities at LVMH, and rumors continue to swirl around Givenchy, including the possibility that Slimane might be moved over to transform the house.

Arnault declined to address the Givenchy question, but offered: “We are full of projects for our other stars in the making. But we want to do it right, as we did with Dior. And we know it takes time.”