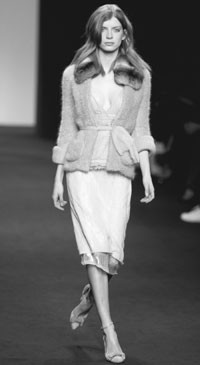 MILAN — This is a big year for Claude Arpels and the Redwall Group he controls, marked by store openings, new licenses and an expansion in the U.S. for the company’s brands Alessandro Dell’Acqua and Borbonese. But Arpels also has long-term plans, with investments of $75 million (62 million euros) earmarked from now through 2008, split between communication and distribution.

For Dell’Acqua, innerwear and beachwear licenses are scheduled for 2005 and the launch of a second line is in the works. Borbonese’s product offering will expand with the addition of home accessories and jewelry this year, with eyewear and innerwear lines in 2005, followed by perfumes and cosmetics in 2006.

Other developments for the group include the signing of a licensing agreement this week with Les Copains to produce and distribute handbags for the house’s signature line and its Blu Les Copains brand. The first collections will bow for next spring.

“Les Copains is a strong, global brand which adapts itself well to the accessories business, and it has strong distribution in the U.S., Europe and Asia,” said Arpels in an exclusive interview at the company’s showroom in Milan. “This is an institutional maison. I would not be as convinced about doing bags for designer brands.”

Arpels also said that Cherry Grove, the group’s ready-to-wear and knitwear manufacturing arm and a longtime producer for Ferré and Fendi, started making cashmere knits for American designer Zac Posen for the fall 2004-2005 collection. The company is currently working on Posen’s resort collection and is discussing a long-term agreement with the designer. Cherry Grove also produces knitwear for Ungaro’s Fuchsia line. “I like working with different designers,” said Arpels.

In accordance with today’s more favorable perception of licensing, Arpels was bullish about the strategy.

“Licensing is a great resource when managed properly, but it has unfortunately been misused in the past and earned a bad reputation over the years, especially in the Nineties,” he said. “I strongly believe in licenses, but they must be strictly controlled, or they take on a life of their own.”

He noted how the Dell’Acqua business weathered difficult times thanks to its licensing agreements. “When Dell’Acqua was facing production and delivery problems [with former partner Gianandrea Cataneo and his Bellemaille manufacturing facility], he managed to stay afloat with the performance of the licensed footwear and fragrance lines,” said Arpels, who took control of the designer’s business in January 2003.

Arpels said in addition to the innerwear and beachwear licenses for Dell’Acqua, he’s developing a second line, which will replace the designer’s original A a Milano line, discontinued with the spring 2003 collection.

“A a Milano was my baby, I was sorry to let it go — I would really like to have a second line again,” said Dell’Acqua in a phone interview. The designer said he is still “studying” different possibilities. “We want it to be more accessible, with small pieces and some knits, but there is no rush, it won’t happen before 2006.”

Drawing from his experience in the American retail market as director of retail development at Van Cleef & Arpels, Arpels has set in motion Dell’Acqua’s and Borbonese’s expansions in the U.S., where he opened a showroom for the company’s brands in New York this year.

In July, a Dell’Acqua boutique will have a soft opening in New York, with an official debut event slated for September.

The Borbonese line, also designed by Dell’Acqua, was introduced to American retailers with the fall 2004 collection. In the U.S., a second Dell’Acqua store is expected to open in 2007 and two Borbonese stores will bow in 2005 and 2006.

“When I started in this business [in 1996], the U.S. gave me a lot and the American press and retailers really believed in me. I’m very happy to return in a concrete way,” said Dell’Acqua.

There are currently 23 points of sale carrying the line in the U.S., including Jeffrey and Henri Bendel in New York, and Ikram in Chicago.

“Dell’Acqua has been doing consistently well, but we did buy more extensively for fall 2004, as we feel there is potential and more depth in the collection — we can see the difference and the improvements in quality with the new backers,” said Scott Tepper, fashion director at Bendel’s. Tepper said strong hits are the designer’s knits as well as cocktail and evening dresses. “The line is sexy but never vulgar.”

“Dell’Acqua’s collections are always tasteful,” concurred Jeffrey Kalinsky, owner of the Jeffrey stores in New York and Atlanta. “I always find something I can’t find with other designers.”

Kalinsky added that the Dell’Acqua special occasion and cocktail pieces were among the stores’ hits, and said Arpels’ group was “making a big push” in the U.S.

Last month, a Dell’Acqua store opened in Naples, the designer’s hometown. This spring, the designer will open two corners in Moscow, where he held a fashion show last November.

“Russia has tremendous potential, said Arpels. “It’s similar to Japan in the Seventies and Eighties. The Russians have a taste for luxury products and they are sophisticated, love sexy clothes and strong designs.”

Dell’Acqua said he wanted to reproduce a cinematographic mood for his campaign, which was shot on location here.

“We found a house with walls and furniture in a nude color, one of my favorite colors,” said Dell’Acqua, who was inspired by French movies by Claude Chabrol and François Truffaut and by actress Catherine Deneuve. “I wanted a sensual, aristocratic woman.”

Dell’Acqua believes Borbonese will appeal to American consumers, as it has “a sports-chic image that is in tune with the taste of American women. It’s luxurious, but it’s also daywear for active women.”

With the first collection sold in the U.S., Arpels registered a 300 percent increase in sales since spring 2003.

Dell’Acqua and Arpels are set on keeping the focus on accessories for Borbonese — the line’s historical core business — while still expanding the brand.

In December, Arpels signed a five-year license with Veneto-based footwear manufacturer Baldan for the production of Borbonese shoes. “We used to produce the line’s shoes internally, but there were always problems. Footwear is highly specialized — similar, in a way, to watches. We want to be able to put out a high-quality, artisanal product — and Baldan offers just that,” said Arpels.