An advertising executive's dream checklist may once have included a Hollywood star, a big budget and a much-lusted-after product to plug. 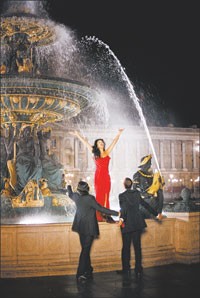 PARIS — An advertising executive’s dream checklist may once have included a Hollywood star, a big budget and a much-lusted-after product to plug. Now a celebrated director has been added to the mix.

While luxury houses have a history of teaming up with movie directors, the trend has accelerated as brands try to broaden their consumer base, according to advertising executives. The brands, of course, get the imprimatur of a major director — who might be able to attract equally big-name actors and actresses. Such filmmakers are especially important with stars like Nicole Kidman, who are protective of their images and who sign on because they know they’ll be working with someone they trust. As for the directors — they get money.

Sources said the amount a director can earn varies widely, but generally is in the $50,000- to $100,000-a-day ballpark (as one agent said, “pretty good money”). A commercial can take up to two weeks to prep and shoot. Sources said Baz Luhrmann, for instance, got about $1 million for the Chanel No.5 commercial with Kidman, who was paid $10 million over three years. Similar amounts were paid to director John Woo for his BMW campaign and Michael Mann for his Mercedes-Benz commercial, sources said. They estimated the Chanel film cost about $15 million in all, as did Woo’s BMW movie “Hostage” in 2002, which also starred Clive Owen.

“Luxury brands are seeking to differentiate the way they advertise,” said Sarah Musgrave, account director at Saatchi & Saatchi. “What’s different is that normally companies have not had the budgets, but now more luxury brands are going democratic and reaching out to mass audiences.”

Film directors obviously have the ability to entertain the masses, but they also bring something more to the advertising mix than just technical proficiency.

“Filmmakers are storytellers,” said Ratner, whose next project is a campaign for Revlon makeup. “Brands want something more than just pictures of clothes. I love fashion, I deal with it in movies and with hair and makeup.”

Similarly, Dior chose Marshall to lens the Bellucci-fronted campaign for its Rouge Dior lipstick because of his ability to convey more than simply a product plug, according to Stephanie Ravillion, business manager for Dior makeup.

“It’s not at all a simple ad for a lipstick,” she said. “It shows luxury as a promise of happiness, it’s a message to women and I think women feel happy once they see this film.”

The LVMH Moët Hennessy Louis Vuitton-owned beauty firm also has worked with Wong in the past, as well as directors David Lynch, Ridley Scott and Claude Chabrol, on campaigns for fragrance and skin care. But the Marshall movie is the first such spot for color cosmetics.

Marshall, whose route into film was via Broadway shows rather than commercial work, had previously turned down advertising offers.

“I had heard that you’re a slave to the powers that be, to the client and to the agency, and I wasn’t sure if that would be something fun artistically,” he said, adding, however, that Dior managed to win him over. “They just said, ‘Paris, Dior and Monica Bellucci.'”

Indeed, since the majority of luxury brands are at some point fronted by major celebrities, it seems a logical progression for big-name directors to follow suit.

“There’s lots of respect between an actress and a movie director,” said Ravillion. “There’s a kind of fusion that doesn’t happen so easily if it’s an art director.”

“We spoke the same language,” said Marshall of Bellucci. “We could talk about the character and the story.”

And like Nicole Kidman and Baz Luhrmann for Chanel, brands are creating the ultimate dream teams by recruiting directors and actors who’ve worked together in the past.

For its Hypnôse Homme scent, Lancôme reunited Wong and Owen — the pair first worked together on a BMW campaign featuring James Brown in 2001. Wong’s involvement was a major draw for Owen. “Lancôme came and said Wong Kar Wai and there is nobody better in the world than Wong Kar Wai,” he said at a Paris press conference earlier this week. “When I saw ‘In the Mood for Love’ — the word cool is overused — but it is one of the coolest things. He conveys this restrained sexuality and sensuality. There is not a living director I would rather work with on a campaign like this.”

Owen lauded the director’s attention to detail. “He is really, really specific. For an actor to work with someone that’s that on top, it’s a real privilege … I wasn’t Clive Owen in that film [for Lancôme], I was directed, it’s acting.”

In addition, luxury brands can lure top directors because of the financial and creative freedom a short film can allow, since it’s unhindered by budget battles with studios and generally is shot in a short period of time.

“If you think about the per-second luxurious budgeting, it’s a dream job,” Musgrave pointed out.

“A director can have artistic freedom with nobody questioning,” agreed Musgrave.

But that freedom can sometimes bring more than a hint of controversy. Jimmy Choo’s fall-winter campaign sparked consumer reactions as sharp as the spiky stilettos being advertised, since it shows legendary music producer Quincy Jones pictured sitting next to model Molly Sims’ seemingly lifeless body with a shovel in his hand.

“I think Quincy looks like a gangster, so to end the story we show her [Sims] in the trunk and him digging a hole — that doesn’t mean he killed her,” insisted Ratner. “But they got a lot of hate mail over at Jimmy Choo for that.”

“So many of the big fashion campaigns look the same and are very static,” she said. “Using a director gives the images a sense of energy and movement, like stills from a movie, that really makes them stand out in the magazines.”

And while many of the big luxury brands are collaborating with big-time movie directors, others are tapping rising stars.

“It was the duo [Rossellini and Cassavetes] that we were interested in,” explained Diane Lepel Cointet, Lamarthe’s marketing and communications director, adding the combined power of two well-known names was an edgy way to give the brand the “glamour of cinema.”

Advertising executives warn, however, that striking the right relationship between brand and director is crucial. “It will be interesting to see how low people will go, whether it’s the right match for the right director,” Musgrave said. “It’s one thing to say, ‘Fine I’ll do Chanel or Bulgari, but, I’m going to do Polo or Lacoste,’ is that going to be as interesting? There is a need on behalf of directors to keep themselves to exclusive brands.”

For Ratner, however, the role of the director is straightforward. “I’m either selling a performance or selling a product,” he said.