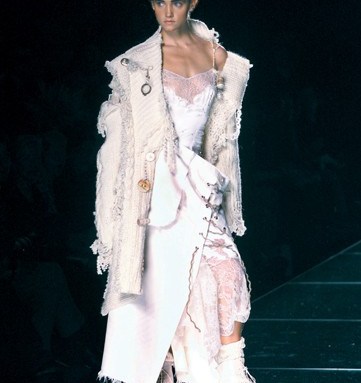 Jacobim Mugatu’s “Derelicte” collection may have been dreamed up by Ben Stiller for his 2001 film “Zoolander,” but the fictional fashion show — which was “inspired by the homeless vagrants of New York” — had a predecessor in the real world.

Galliano was inspired by the hobos he encountered while jogging along the Seine. Yes, homeless people. But it wasn’t offensive, according to WWD’s reviewer, because the collection showed “such great affection and respect for its subjects.”

The collection also triggered thoughts of the Thirties Rag Ball when socialites dressed like the impoverished masses for a night. Jackets, dresses and pants were torn, stretched and slashed. “Garbage” like dented kitchen utensils and mini whiskey bottles were strung into jewelry. And Galliano didn’t forget about the City of Light’s starving artists. One, a crazed ballerina en pointe, trotted down the runway in a mad swirl of tulle.